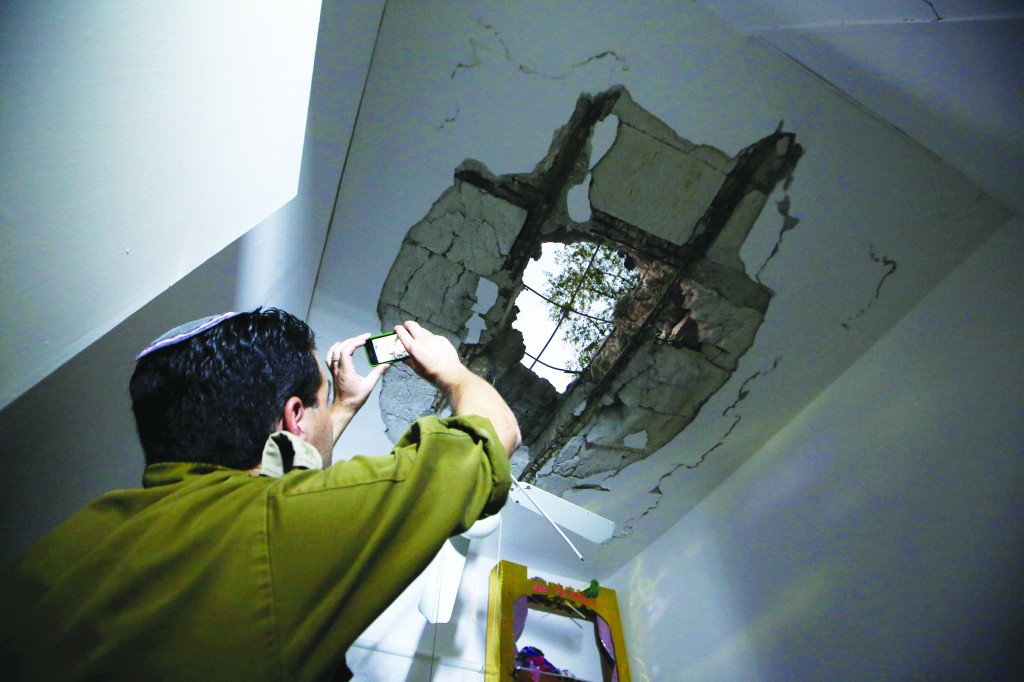 Over the coming few days, the security and political establishment in Israel will have to make a clear decision as to whether they are advancing Operation Protective Edge, now entering its third day, to the next — critical — stage, a ground operation. The air force has nearly exhausted all the air strikes on the list of Hamas targets. Over the past two days, the IAF has dropped bombs weighing more than 500 tons in more than 670 air strikes. Among other things, some 50 terror tunnels and 70 concealed rocket launchers were destroyed.

The army has completed a call-up of reserves and has begun to mobilize the soldiers who will take part in a ground operation, if it is decided upon. Today, or by tomorrow at the latest, the army will have a sufficient force to begin the operation. Going into Gaza on the ground still requires a cabinet decision to execute.

“We are continuing with the air strikes, which are exacting a very heavy price from Hamas. We are destroying large weapons stockpiles, damaging their terror infrastructure and operating bases, institutions, government buildings and the homes of terrorists. We are also killing terrorists in varying ranks. This will continue and intensify,” Yaalon said.

“This will not be a short operation and we have to continue to have patience,” Yaalon said. “We will continue to strike them from the air, the sea and the ground. The operation against Hamas will expand in the coming days and the price they will pay will be heavy.”

Yaalon did not directly refer to the possibility of a ground operation, even though, between the lines, it was possible to understand his implication.

The one who first raised the possibility as a real plan of action was the prime minister, who began calling world leaders to prepare them for a ground operation, unless Hamas changes direction and commits to the understandings reached in Operation Pillar of Defense, with no preconditions.

“Hamas and other terror groups in Gaza are launching rockets at cities throughout Israel — Tel Aviv, Yerushalayim, Haifa, Ashdod, Be’er Sheva, Sderot and other cities,” Netanyahu said. “There is no country in the world that would sit passively when hundreds of rockets are being launched into its cities, and Israel is no different. … We will continue to protect our citizens against Hamas attacks.

“Hamas, by contrast, places Palestinian civilians in danger — intentionally. Terrorists take cover in hospitals, schools, mosques and apartment buildings in Gaza. They are carrying out a double war crime: firing on Israeli civilians while hiding behind Palestinian civilians. This operation can take time; we are determined to protect our families and our homes. I spoke with several world leaders, and I appreciate their strong support for our right and obligation to defend ourselves, which is what we will continue to do.”

He told the leaders that no country would agree to withstand the constant barrage of rockets and attempts to infiltrate into Israel from the sea and through tunnels. He added that Hamas is recognized in the world as a terror organization, and the international community should strongly condemn the rocket fire on Israel.

Senior army officials and political figures predict that Israel will not be able to carry on the current state of affairs for too much longer. If Hamas doesn’t quickly change direction, or agree to a full and unconditional ceasefire immediately, it will find itself facing the IDF on the ground in Gaza.

President Shimon Peres made this clear in several interviews with international media. “If the rocket fire stops in the next day there will not be a ground operation. But if Hamas and the other organizations continue shooting, sooner or later, there will be a retaliation,” Peres said.

IDF Spokesman General Motty Almoz addressed what he referred to as the weakening of Hamas under IDF strikes in Gaza. “Hamas is in big trouble the past few weeks and is working in distress. Its rocket fire is not effective. Missiles that it fires from Gaza and aims at civilians, women and children, are intercepted by Iron Dome. Minutes later, a plane takes off and bombs the launch site,” he said.

“We are at the beginning of a significant operation, which includes massive air strikes throughout the day and night,” Almoz said, adding, “Hamas was prepared for a totally different story, and failed also to carry out a terror attack at Kibbutz Zikim and through a tunnel near the border.”

He claimed that the IDF strikes are accurate and very specific. “We have no intention of hitting civilians. We work in a focused manner and take every precaution possible, while at the same time, Hamas uses civilians as hostages and human shields for its acts of terror,” Almoz emphasized. “In the coming days, this will intensify, and our message is unequivocal: we will target Hamas and beat it.”

The Chief of General Staff, Major General Benny Gantz, approved an operative plan for ground forces last night. “We are progressing so that the operation should be ready. We have called up many reserve soldiers to replace regular soldiers in other areas,” the IDF spokesman noted.

In the last two days, IDF air strikes have caused more damage in Gaza than the whole Operation Pillar of Defense. Some 50 people have been killed and 400 wounded. Homes of Hamas terrorists have been bombed, and there is hardly a terror official from the rank of brigade commander and up whose home is still intact.

One of the air strikes yesterday targeted a Hamas leader in the northern Gaza Strip, Ahmad Andour.

Andour was born in 1967 and is a senior member of the group; he is responsible for firing missiles from northern Gaza. He is also responsible for the attempted terror attack that was thwarted on the coast of Kibbutz Zikim.

Andour previously commanded the cell that carried out several attacks against IDF soldiers. He spent six years in Israeli prisons for his activities, and then another five years in a Palestinian prison. After his release, he participated in an attack where he fired on a gas tanker; one person was killed and another was seriously wounded. During the second intifada, he was the right-hand man of the arch-terrorist, Adnan Al Awal, an engineer in Hamas. In addition, he was involved in the attempted infiltration to Dugit in February 2003, in organizing a suicide attack at the Erez Junction in 2004, in which four people were killed, and the double suicide attack at the Ashdod Port in March 2004, which killed 11 people.

As one of the heads of a terror organization in Gaza, Andour organized two car bomb attacks that were thwarted by the IDF. Likewise, he initiated a confrontation with soldiers during which three soldiers were killed and two were wounded, was involved in placing a bomb near a tank in Dugit that took four lives, and a shooting attack at the Karni crossing. Today, Andour is the head of the Hamas forces in northern Gaza, and was involved in all Hamas activities in that area.

Yesterday, after targeting the operations infrastructures that he commanded, an underground weapons storehouse was discovered as a result of the subsequent explosions.

Concurrent to the strike on his house, which was also his headquarters, aircraft also targeted the infrastructure sites of several other Hamas terrorists who were involved in many attacks towards Israel.

Another terrorist taken out yesterday was Abdullah Difala, while he was riding his motorcycle in the central part of Gaza Strip; he was killed on the spot. Two other terrorists were killed near the Nusserat refugee camp.