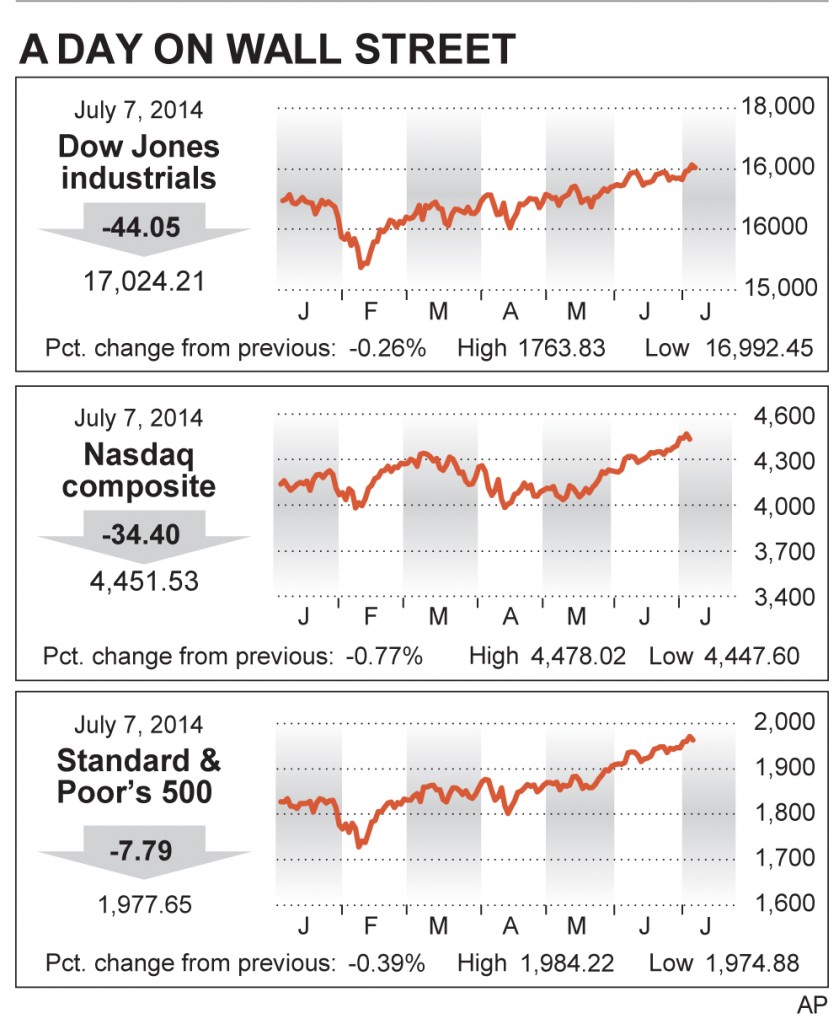 After pushing stocks to records last week, investors turned cautious on Monday ahead of a batch of corporate earnings reports.

The Dow Jones industrial average ended almost 50 points lower after closing above 17,000 for the first time last week. Investors moved money into stocks traditionally thought of as safer than the broader market: utilities, telecommunication companies and consumer staples such as soft drinks and detergent.

Stocks that depend the most on a growing economy were among the biggest decliners, including small companies, consumer discretionary names, materials and industrial stocks.

There’s a lot riding on this quarter’s earnings season. Investors largely believe the weather had an unusually large impact on the U.S. economy in the first three months of year, and that economic activity rebounded in the second three months of this year. Many companies blamed the weather for their disappointing first quarter results.

Secondly, stocks are trading at all-time highs and investors will need Corporate America to deliver on profits in order to justify these record-high prices.

“As we’ve emphasized in recent weeks, stocks are not cheap, but we believe they can climb modestly higher in the second half [of the year] amid continued economic improvement,” said Russ Koesterich, global chief investment strategist at BlackRock, in a note to investors.

The Dow reached a record and a new 1,000-point milestone last Thursday by closing above 17,000 for the first time. That followed a strong U.S. jobs report. U.S. markets were closed Friday for the Independence Day holiday.

The Russell 2000 index, which is made up primarily of small-company stocks, fell more than the rest of the market. The index lost 1.7 percent, versus the 0.4 percent decline in the S&P 500, which is made up of large companies.

Another sign that investors were hesitant to place big bets ahead of corporate earnings reports could be seen in Monday’s low trading volume. Roughly 2.6 billion shares traded hands on the New York Stock Exchange, well below the 3.2 billion shares that moves on an average trading day.

Aluminum mining giant Alcoa reports its latest results on Tuesday and Wells Fargo, the No. 1 U.S. mortgage lender, reports on Friday. Investors are expecting second quarter profits to be up 4.9 percent from a year ago, according to FactSet.

“I think we’re going to exceed expectations,” Tanious said. “Companies were able to post 6 percent earnings growth in the first quarter, even with the U.S. economy contracting. Now that we’ve seen a rebound in economic activity, I think we’re looking at a pretty good earnings season.”

Major airlines stocks fell after the Transportation Security Administration announced new security measures that would impact international flights into the United States. The TSA said that all electronic devices would need to have power in order to travel, including tablet computers and cell phones, which could impact the number of passengers able to travel.

Investors also tried to reduce their exposure to risk by buying U.S. government bonds. The yield on the U.S. 10-year note fell to 2.62 percent from 2.64 percent late Thursday.

• Archer Daniels Midland rose 73 cents, or 2 percent, to $46.50 after the company announced it was buying Swiss food flavorings company Wild Flavors for $3 billion in cash. Wild Flavors makes flavors and oils that are used in processed foods.

• BioDelivery Sciences International was up 9 percent after the drug developer said its treatment for severe pain fared better than a placebo in another late-stage study. The company said the trial triggered another $10 million payment from Endo International Plc, which has a licensing agreement with BioDelivery. BioDelivery’s stock rose $1.07 to $13.06.