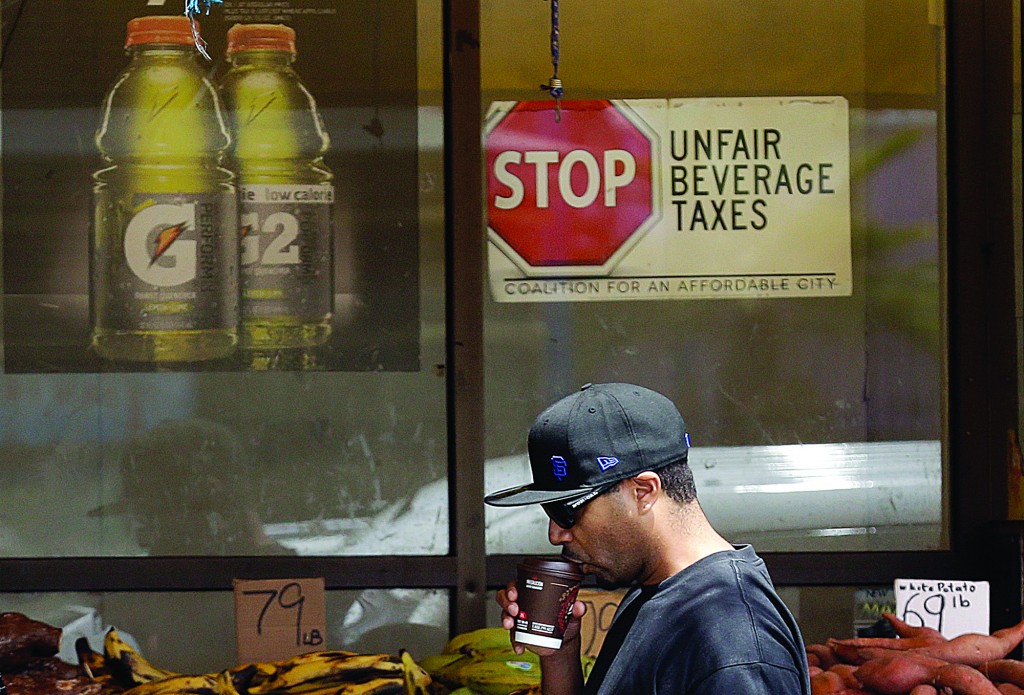 If two of the most progressive U.S. cities don’t pass a tax on sugary drinks, will the idea finally fizzle out?

Sugary drinks have been under fire for years, with many blaming them for rising rates of obesity and chronic diseases. Yet efforts to curb consumption by imposing taxes and other measures have failed, in part because the beverage industry has spent millions to defeat the efforts.

Now, the question of whether a bottle of Dr. Pepper with 64 grams of sugar should be treated like a pack of cigarettes is being considered in San Francisco and Berkeley, with the two California cities aiming to become the country’s first to pass per-ounce taxes on sugary drinks.

The stakes are high, especially given the Bay Area’s reputation for liberal politics. If approved, Coca-Cola, PepsiCo and other companies fear it could galvanize health advocates elsewhere. If defeated, the idea of a soda tax could be dead.

“The industry is really motivated to beat us here. If they can beat us in San Francisco and Berkeley, nobody is going to take them on,” said Larry Tramutola, the political consultant handling the campaign in support of the tax in Berkeley.

The odds aren’t in favor of taxes. Since 2009, about 30 special taxes on sugary drinks have been introduced around the country. Few have gained traction and none have prevailed. Chris Gindlesperger, a spokesman for the American Beverage Association, the lobbying group for Coke and Pepsi, says the failures show people don’t support the idea.

Others say the industry uses unfair tactics to defeat measures, such as setting up groups with names like “Citizens Against Beverage Taxes,” which sound like they are community-driven but aren’t. They are nevertheless influential in shaping people’s attitudes.

In San Francisco and Berkeley, supporters of the tax say they’re better organized to battle such tactics. They’re hitting the streets to educate voters and plan to run ads, work phone banks and mail fliers.

“In other places, bless their hearts, but they were ill-prepared for what was coming at them” said Maggie Muir, a consultant who was hired by San Francisco lawmakers to lead the political committee in support of the soda tax.

The San Francisco proposal is for a two-cent-per-ounce tax on sugary drinks and would not apply to milk or natural fruit juices without any added sugars. It needs a two-thirds vote to pass in the November election.

The tax in Berkeley is for a penny per ounce and needs a simple majority of the vote.

It’s a high bar either way. Just two years ago, similar measures were soundly defeated in other California cities. Part of the reason is that even some who think drinking sugary drinks can be harmful don’t believe taxing is the solution.

Barbara Cassidy, 50, fears a soda tax could lead to similar taxes on other foods.

Overall, Americans have been cutting back on soda for years, with sales volume down about 13 percent over the past decade, according to the industry tracker Beverage Digest. But other sugary beverages with healthier images have climbed; sports drinks, for instance, are up about 35 percent.

Taxing a product to discourage use has proven effective with cigarettes. According to the American Cancer Society, there’s a 4 percent decline in overall smoking rates for every 10 percent hike in cost. Still, at least one study has questioned how effective a tax on sugary drinks could be since people might just spend their money on other high-calorie foods.

France and other countries have imposed taxes on sugary drinks in the meantime. Mexico, which has one of the highest obesity and soda consumption rates in the world, passed a tax on sugary drinks last year.

Back in the U.S., critics have persisted. California lawmakers considered a measure that would have slapped a warning label on sodas before it was ultimately defeated last month.

In New York City, former mayor Michael Bloomberg pushed to cap the size of sugary drinks sold in restaurants and other venues at 16 ounces. The move was shot down after legal challenges spearheaded by the beverage industry, with the state’s highest court ruling last month that the city’s Board of Health overstepped its authorities by imposing the cap.

The beverage industry also waged a heavy marketing campaign to win over the public. Some ads featured the Statue of Liberty holding up a giant soda instead of a torch.

“Overall, we lost the PR war,” said Thomas Farley, the city’s health commissioner at the time.

If given another chance, Farley said he would frame the cap as government giving customers the option to get a drink in a more reasonable size. Right now, a small drink in many places is 16 ounces. At McDonald’s, that translates to 39 grams of sugar and 140 calories.

A Different Kind of Fight

In San Francisco, a small group dressed in red T-shirts that say “Coalition for an Affordable City” has been posting signs in opposition to the tax on sugary drinks.

The coalition was created by a public affairs firm hired by the American Bev­ er­ age Asso­ ciation. It bears close resemblance to groups the industry’s lobbying association has set up to fight soda measures in other cities. Gindlesperger, the spokesman for the ABA, said the name isn’t intended to mislead people about the group’s origin.

“We’ve had to build coalitions in places with our partners like retailers and restaurants and grocers and others to voice our opposition,” he said.

Scott Wiener, one of the city supervisors who introduced the tax in San Francisco, thinks otherwise.

“They come in with this fake organization, trying to convince our residents that this coalition is really looking out for their best interests,” he said.

Before introducing the tax, Wiener worked with his political consultants, Erwin & Muir, which established a group called “Choose Health SF” and enlisted the support of organizations, including the California Nurses Association and parent groups.

Like the beverage industry, Choose Health SF is already in campaign mode, hitting farmers markets and neighborhood festivals to recruit supporters. It also set up a website and created a satirical account on Twitter called “Big Soda Crybaby” to mock the industry’s talking points.

Muir said the idea is to “inoculate and educate” the public against the coming campaigning blitz by the beverage industry.