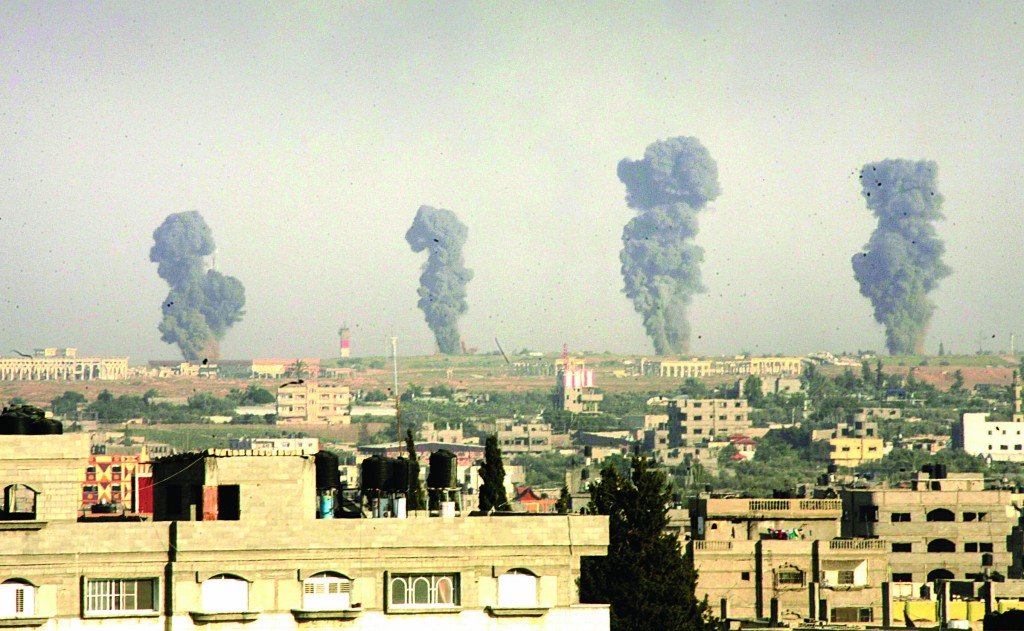 Any hope that terrorist groups in Gaza would respond positively to Israel’s policy of restraint came to an abrupt end on Monday after intense rocket barrages from the Gaza Strip triggered air raid sirens in Ashkelon, Kiryat Malachi, Ashdod, Netivot, Be’er Sheva, and as far north as Rehovot.

By the end of the day, when it became clear that Hamas would not accept the Israeli demand for an unconditional ceasefire, the security cabinet authorized a phased operation in the Gaza Strip. Hamas officials presented a list of 11 conditions, which were summarily rejected by Israel.

At one point, rockets were hurtling into southern Israel at the rate of over one per minute during a half-hour span. Some could be seen from as far away as Beit Shemesh, eyewitnesses told Arutz Sheva.

Four civilians were injured and 25 needed to be treated for shock as a result of Monday’s attacks.

The Iron Dome missile defense system shot down 12 rockets over Netivot and Ashdod.

Air raid sirens heard on the outskirts of Yerushalayim and Tel Aviv were false alarms, according to a police spokesman.

For the first time in the crisis, Hamas claimed responsibility for the rocket attacks. According to a security source, Hamas is not only allowing other terror groups a free hand, but is itself playing a dominant role in the attacks.

An estimated 80 rockets hammered southern Israel throughout the day, and by early evening a senior military source said the IDF was taking “significant steps” to prepare for a new phase in the struggle with Hamas.

Some 1,500 reserves were called up and infantry assault units were positioned on the Gaza border, in case “a decision is made” for an offensive in the Hamas-ruled enclave, a source said.  As we went to print, we learned that the IDF had launched “Operation Protective Edge” in Gaza very early Tuesday morning.

On Monday, the Israel Air Force carried out raids on 20 terrorist targets in Gaza. Two terrorists were reported killed.

Former Shin Bet head Avi Dichter told Ynet on Monday that Israel must accept that it has to wipe out the Hamas threat from Gaza.

“We must focus on how we’re going to destroy Hamas’s military capabilities in Gaza,” he said. “This is not a three-week operation like Cast Lead and not an eight-day one like Pillar of Defense. This will take over a year. This is a move we can’t avoid. While we can’t destroy ideology, we can destroy a terror organization.”

The IDF confirmed Monday that a Gaza tunnel used by Hamas terrorists was the result of a military operation several days earlier.

A senior military source said that the six Palestinians killed in the tunnel were Hamas members “who were in the tunnel with explosives” and that “the tunnel was intended for a significant terror attack with special infrastructure and an anti-soldier force.”

“The operation against the tunnel was undertaken several days ago,” source said. “The Hamas members touched the explosives … and it caused the tunnel’s explosion,” which collapsed and buried them.

The U.S. issued a statement of support on Monday night. State Department spokeswoman Jen Psaki said that Israel has the right to defend itself, but called on both sides to exercise restraint.

The Security Cabinet met Monday for the fourth time in eight days. Earlier, on Sunday night, the IDF struck a terrorist rocket-launching crew in Gaza that was “about to launch a rocket” at Israel, he added. The cell did not belong to Hamas. Two of its members were killed in the air strike.

The Israel Air Force struck an attack tunnel in southern Gaza that was aimed at carrying out a terror attack against Israeli civilians, the IDF said Monday evening. The air strike is a “targeted defensive measure” carried out in accordance with the latest security evaluation, the IDF added.

The Israel Air Force struck 18 targets across Gaza between Sunday night and Monday afternoon, and Palestinian sources said nine combatants — seven of them Hamas members — were killed in the Strip.

Two members of a Palestinian rocket-launching crew were killed in central Gaza in an IAF strike. The IDF said the men were preparing to fire rockets into southern Israel.

A few hours later, the IAF launched two waves of air strikes, striking nine targets in the first wave and five targets in the second. Most of the targets were underground rocket launchers and terrorist operations centers.

The Home Front Command has put the southern communities on a virtual wartime alert, instructing the municipalities of Ashkelon, Ashdod, Be’er Sheva, and Gaza border communities to open public bomb shelters in case of long-range Hamas rocket attacks. This is the first time such orders have been given since 2011’s Pillar of Defense operation against Hamas terrorists in Gaza.

As an additional precaution, residents of Ashdod and Be’er Sheva have been advised not to hold public gatherings of more than 500 people, while residents of Gaza border communities have been told to remain within 15 seconds of protected areas, in order to take cover in the event the missile warning system goes off.

Palestinian sources reported on Sunday that Israel had distributed thousands of flyers in Gaza, asking them, for their own benefit, to report any work related to the digging of tunnels for terror purposes.

“The diggers of these tunnels pose a danger to you, your children and your property. Don’t sit passively!” the Israeli notice urged, and provided a phone number to call with information.