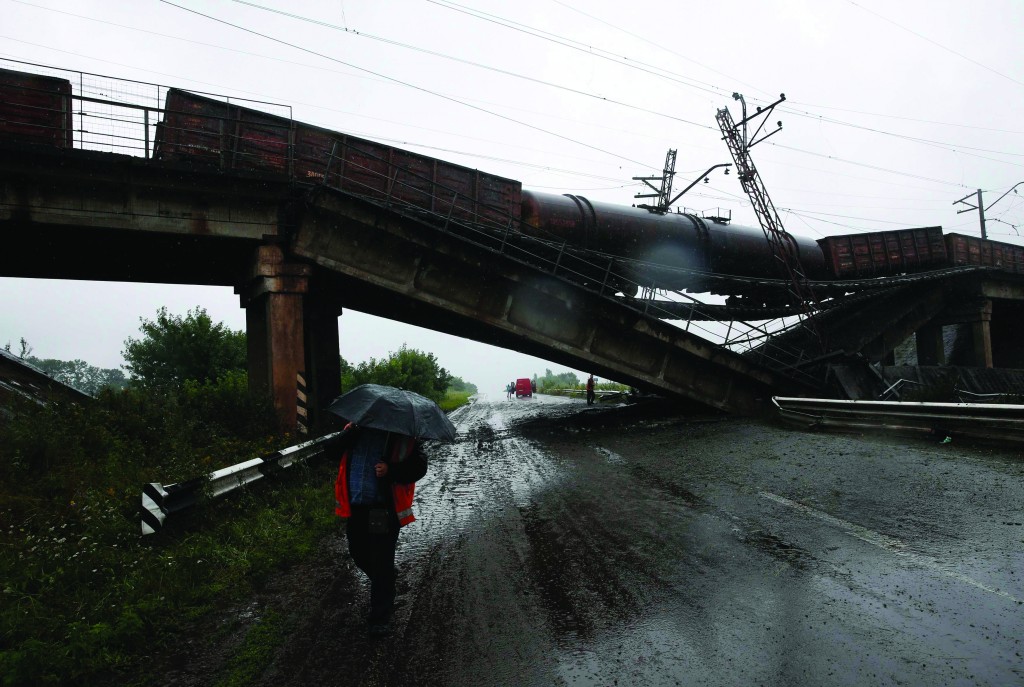 After Ukrainian forces’ seizure of a key rebel stronghold in the east, the major cities of Donetsk and Luhansk could be the next focus of major fighting. Three bridges on roads leading to Donetsk were blown up Monday — possibly to hinder military movements, though the rebels claim it was the work of pro-Kiev saboteurs.

As nerves fray over the prospect of fighting in the sprawling cities, Russia is urging Europe to put pressure on the government to end the fighting, but is taking no overt action. Rebels in Ukraine and nationalists at home have called for the Kremlin to send in troops to protect the pro-Russia insurgents, but President Vladimir Putin, wary of more sanctions being imposed by the West, has resisted.

Separatist fighters driven out of the city of Slovyansk and other eastern towns by the Ukrainian army over the weekend are regrouping in Donetsk, a major industrial city of 1 million where pro-Russia rebels have declared independence as the Donetsk People’s Republic. Pavel Gubarev, the region’s self-described governor, had promised “real partisan war around the whole perimeter of Donetsk” before thousands of supporters at a rally Sunday.

Ukrainian authorities meanwhile say their strategy is to blockade Donetsk and the rebel-held city of Luhansk, the two largest cities in the separatist east, in order to cut off rebel supply lines. Civilians would be allowed to leave and seek aid elsewhere, national security council spokesman Andrei Lysenko said Monday, according to the ITAR-Tass news agency.

Battles between Ukrainian forces and the separatists have left over 400 people dead and thousands homeless since the uprising began in April. Ukraine’s government ended a shaky, unilateral 10-day cease-fire last week, and has since stepped up its fight against the rebels.

It was not clear who blew up the highway and rail bridges Monday. Their destruction would most benefit the rebels by blocking avenues for military advances, but the rebel Donetsk People’s Republic issued a statement blaming two of the blasts on Ukrainians aiming to interfere with rebel supply lines.

In the village of Novobakhmutivka, where a rail line crosses over a highway out of Donetsk, an 11-wagon cargo train was perched perilously Monday on the collapsed bridge. The road leads toward Slovyansk, a former insurgent stronghold that was recaptured Saturday by Ukrainian troops.

Anatoly Krasov, who was driving along the road Monday, said he saw an explosion before the bridge collapsed with a large cargo train on it. He said a group of men dressed in the camouflage uniforms often worn by the rebels then got into their cars and drove back toward Donetsk.

Two other bridges on roads leading from Slovyansk to Donetsk were also destroyed Monday in the villages of Zakitne and Seleznevka, the Road Transportation Agency of Donetsk Region said.

The insurgents control the regional administration building in Donetsk and checkpoints on the city’s outskirts. They also face little internal resistance from police forces or government officials in the city, who have done nothing in recent months to hinder their free movement around Donetsk.

But it is unclear whether they will be able to put up major resistance in the face of a Ukrainian military attack. Ukrainian forces demonstrated their superior firepower in repelling a rebel attempt to take control of Donetsk Airport in May, a battle that killed dozens of rebel fighters. Many residents have fled the city and the streets are often deserted but for the rebels.

Still, experts say that capturing Donetsk would be much more difficult than retaking Slovyansk, a city ten times smaller, and it could require the type of street-to-street urban warfare that would favor the rebels, not government troops.