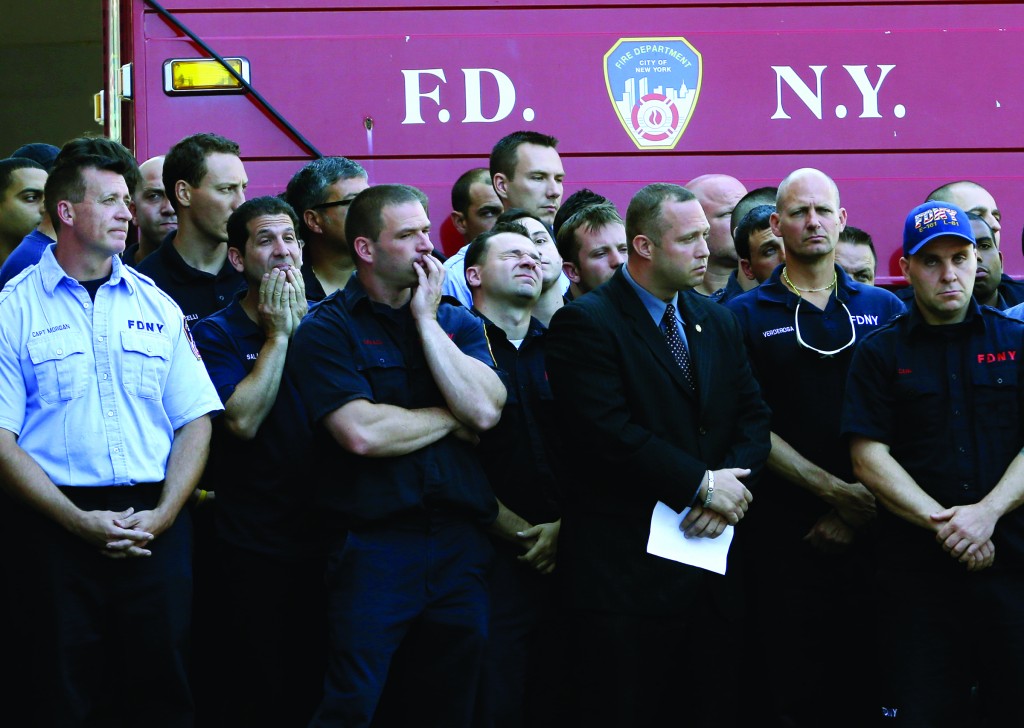 Two weeks after he was feted for saving the life of a yeshivah boy stuck in a roll-up gate, a 14-year veteran of the Fire Department of New York on Saturday became the force’s first victim in two years when he succumbed to injuries sustained while rescuing others.

The blaze which started by an air-conditioner electrical cord pinched between a bed frame and a wall killed Lt. Gordon Ambelas, who became trapped while looking for possible victims in a burning public-housing high-rise. He suffered multiple injuries while on the 19th floor of the 21-story Williamsburg building.

“We lost a real hero tonight and our hearts are heavy,” Mayor Bill de Blasio said of the 40-year-old married father of two girls.

Fellow firefighters found Ambelas unconscious and carried him out of the building. They tried  to try to revive him, but he died at a hospital.

“Ambelas went into the apartment to search for life and did not
come out, and by the time his brother firefighters found him, it was too late for him,” Fire Commissioner Daniel Nigro.

“He died a hero — that’s how he lived,” firefighter Eric Bischoff said of his longtime colleague, friend and former roommate, calling Ambelas “truly one of the best human beings that anyone would ever want to meet.”

It is the department’s first line-of-duty death since April 2012. Ambelas is the 18th to die since 343 firefighters perished in the Sept. 11, 2001, terrorist attacks.

Ambelas, who lived in Staten Island, was among the firefighters from Ladder 119 honored last month for helping to save Mendy Gotlieb, a 7-year-old boy who became trapped in a roll-down gate in May. The boy was pulled 15 feet off the ground when his arm and head got stuck.

“We were shocked and devastated to hear about the tragic death of Lt. Ambelas, the savior of our child Mendy,” said Avraham Gotlieb, Mendy’s father, in a statement. “He literally sacrificed his life for others. I hope that his family finds solace in the so many lives that are living on because of him.”

Rabbi Moshe Dovid Niederman, executive director of the United Jewish Organizations of Williamsburg, expressed condolences on behalf of the community.

“This tragic story shows the dangers the lieutenant and all FDNY members put themselves in, willingly and knowingly, to save others,” Rabbi Niederman said. “They are really the bravest.”

At the time when he was presented with a plaque at a press June 26 conference, Ambelas said that the incident “shows that FDNY members are always ready to help others. It was great teamwork all around.”

He was promoted to lieutenant 10 months ago and assigned to Battalion 28 in Brooklyn, officials said. He worked in various firehouses as part of the job and spent the last several months working in Ladder 119.

The fire broke out around 9:30 p.m. Saturday in an apartment on the 19th floor of the building that is part of the six-building Independence Towers complex owned by the New York City Housing Authority. Flames then spread to the 17th and 18th floors.