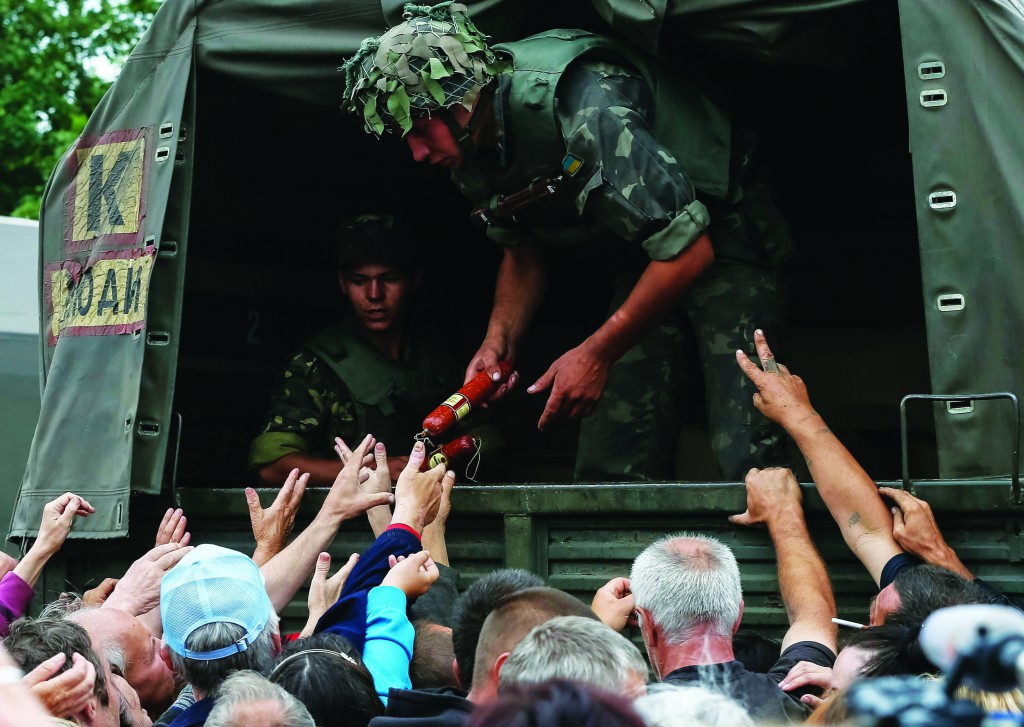 Ukraine’s government said it would quickly seize more territory from rebels after re-taking the separatist stronghold of Slaviansk in what President Petro Poroshenko called a turning point in the fight for control of the country’s east.

Government forces routed pro-Russian rebels in the flashpoint city on Saturday and raised the blue and yellow national flag over what had for months been a separatist redoubt.

On Sunday, Ukrainian forces shelled parts of the rebel-held town of Luhansk near the Russian border, hitting a battery-making factory and other buildings, Russia’s Itar-Tass news agency reported, quoting rebels in the town.

It said some people were wounded but there was no further word on casualties. “People are hurriedly fleeing to bomb-shelters or are leaving the area that is being shelled,” it said.

“My order is now in effect —tighten the ring around the terrorists,” Poroshenko said on Sunday. “Continue the operation to liberate Donetsk and Luhansk regions,” he said, naming Ukraine’s two major eastern parts which have boiled with separatist rebellion since April.

In a statement, Poroshenko’s interior minister, Arsen Avakov said: “We have a plan of action. … We will move forward every day.”

Ukrainian forces said they now had full control of Slaviansk and the nearby town of Kramatorsk. Many rebels appeared to have retreated towards Donetsk, the east’s main industrial hub where separatists first declared a “people’s republic”.

Armed rebels were patrolling one of the main streets of Donetsk on Sunday, local news agency Novosti Donbass said.

Andriy Lysenko, a senior official of Ukraine’s “anti-terrorist operation”, said: “The bands of terrorists are demoralized but they are all the same carrying out treacherous attacks on Ukrainian forces.”

In Slaviansk and neighbouring areas, he said, scores of rebels were surrendering. “Those who are giving themselves up are providing information about units of [rebel] fighters and where weapons are,” Lysenko said.

Moscow, which has already come under economic sanctions from the West, denies Western and Kiev’s accusations it has been backing the insurrection, possibly with a view to dismembering the former Soviet republic.

Talks in Berlin last week involving the foreign ministers of Ukraine, Russia, Germany and France had set Saturday as the day for talks between a contact group representing Ukraine, Russia and the OSCE security watchdog, and separatist leaders.

The talks were to have been aimed at working out an effective ceasefire observed by the opposing sides, but against the background of the military action in Slaviansk there was no sign they had actually been held.