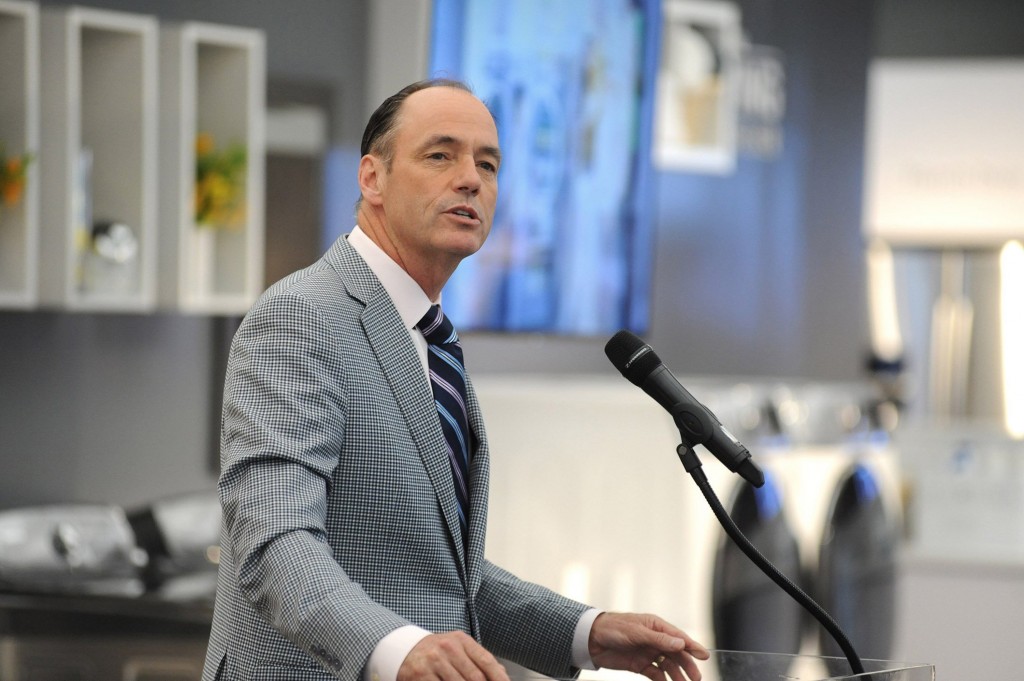 In Manhattan’s Meatpacking District, a group of Michelin star-rated chefs – the creme de la creme of cuisine – were whipping up gourmet appetizers for a crowd of more than 100 people, mostly members of the media. And all the cooking was done in a demonstration kitchen featuring Samsung’s Chef Collection line.

Ridgefield Park, N.J.-based Samsung Electronics America Inc., the U.S. unit of the Korean electronics giant, was the host of the evening party last month. The media got a close-up look at Samsung’s latest line of home appliances. Samsung’s Chefs premium kitchen collection was center stage at the festive showcase, which many of the company’s top U.S. and global executives attended.

The party was serious business. Long an industry leader in smartphones and some other appliances, Samsung has turned its attention big-time to white goods – refrigerators, clothes washers and dryers, dishwashers and ranges. And it’s making solid inroads against leaders such as General Electric, Whirlpool, Kenmore and others as it sets its sights on being No. 1 in that category as well.

Samsung is grabbing market share, with a combination of technological innovation and stylish design, in what the company claims had been a stagnant sector ripe for change. Part of the strategy is offering higher-end products that aren’t as pricey as luxury brands such as Viking – “premium mass-market” appliances that are getting rave reviews and winning industry awards.

“Definitely, the Samsung brand has come a very long way in the past 10 years,” said Alan Wolf, a senior editor at TWICE magazine, a trade publication that covers the consumer-electronics industry. “Samsung was very focused, very concentrated and very determined.”

This year, Samsung, which bills itself as America’s fastest-growing appliance company, ratcheted up its product introductions, with its largest launch to date. The company is promoting its new refrigerators and other products with its biggest marketing campaign, run out of Ridgefield Park.

The home-appliance debuts include new additions to the Chefs Collection – which incorporates suggestions from members of Samsung’s Club des Chefs such as Boulud – and include a four-door refrigerator with metal cooling plates to prevent temperature fluctuations, and a dishwasher with “Water Wall” technology: a sweeping spray of water that shoots up from the bottom of the appliance and moves back and forth, rather than conventional circular water jets, which can miss cleaning dishes in corners.

“Essentially, we’re changing the way that we clean dishes,” Kevin Dexter, senior vice president of home appliances for Samsung’s U.S. unit, said during his presentation. “Over the years, dishwashers have been trying to fit a round peg in a square hole, or in more technical terms, conventional rotary water jets in a box-shaped dishwasher.”

Apart from the Chefs Collection, Samsung has premiered new models of its “Food Showcase” refrigerators, which feature an exterior door for easy access to frequently used food items, such as beverages; large capacity, 30-minute quick-speed washers; and even a compact “Baby Care” washer, to clean and sanitize infants’ diapers separate from adult loads.

In an interview at the party, Tim Baxter, president of Samsung Electronics America, said that the company saw an opportunity to “bring some innovation, some design, some speed” into a home-appliance market “that was, we felt, fairly stable” and “even stagnant.”

The market’s growth stalled and declined during the Great Recession, only really recovering and starting to grow again last year, said Eric Voyer, a vice president at TraQline, a market research company.

Samsung has tough marching orders from corporate headquarters in Seoul: for the company to become No. 1 globally in home appliances, in terms of revenue, by 2015.

“It seems a very challenging target for them,” said Dinesh Kithany, a senior analyst for home appliances at IHS Technology who follows Samsung globally. “It’s quite ambitious. I’m not saying it’s not possible. They have the power. They have the brand name. I’m sure they can fight the stalwarts like Whirlpool. I think they’ve grown very nicely across the globe.”

Samsung has its hurdles; unlike its American rivals, it doesn’t have U.S. manufacturing facilities, Kithany noted. And Samsung trails Whirlpool, Kenmore and others in terms of brand recognition in home appliances, Voyer said. But Baxter is undaunted.

“We have grown to over $228 billion, Samsung Electronics this past year, globally,” Baxter said. “We have aspirations to continue that type of growth level.”

Domestically, Samsung is No. 5 in revenue for major home-appliance sales, with 10.7 percent of the market at the end of the first quarter this year, up from 6.7 percent four years ago, according to TraQline. Its survey ranks General Electric No. 1, at 15.4 percent; followed by Whirlpool, at 15.2 percent; Kenmore, at 14.7 percent; and LG Electronics USA Inc., at 13 percent. The U.S. home-appliances industry is a $26.5-billion-plus business, according to TWICE research partner Stevenson Co.

“From being two brands that were not very familiar to American kitchens, both companies have found more than a foothold: They’re established players in this marketplace that had traditionally been dominated by Whirlpool, Maytag, GE and Kenmore,” Wolf said. “It’s amazing. It’s quite an accomplishment.”

Baxter and Boo-keun Yoon, president and chief executive of Consumer Electronics at Samsung Electronics Ltd., both spoke at the Manhattan event, where they announced that Boulud had joined Samsung’s Club Des Chefs roster.

During his formal presentation, Baxter talked about Samsung’s success at the CES electronics trade show in January in Las Vegas, where the company unveiled its latest products.

“We came out of Las Vegas with an even stronger sense of momentum and a deeper sense of purpose to make a real difference in the lives of consumers,” Baxter told the packed room at the Manhattan event.

Samsung won a host of awards at the CES this year, and its dishwasher caused the biggest buzz at that show, Wolf said.

“When you think of an appliance as a basic commodity product, how much further can you enhance it?” he said. “Then you have an innovation like that – where the arm moves across rather than spins, and is able to reach more parts of your dish load – that got a lot of attention.”

Such differentiation is important in the home-appliance sector – it’s a way to gain market share, Kithany said.

Samsung carved out a niche as a “premium mass-market” brand, Wolf said.

“So it’s not quite luxury, but it’s maybe just a tick below that level,” he said. “So it’s a price that’s aspirational but not beyond the reach of a very large swath of the country.”

Samsung doesn’t sell as many units as other home-appliance makers, but its average price paid per item is $1,004, versus the industry average of $703, Voyer said.

The emphasis is on design and innovation for Samsung’s appliances, Wolf added.

“They are beautiful utilities, because they look almost like art: sculpted, rounded edges, stainless steel,” he said. “And also, they pride themselves on their technology. They’re a very technology-forward company.”

“At Samsung, we uncover meaningful insights and creative ideas from many different sources,” he said. “We engage with consumers to know how they live. We work closely with chefs and home designers who have passion and imagination. And we tap into industry and cultural trendsetters to stay ahead of the curve. … It’s our deep understanding of the market that enables us to create products that people never knew they needed, and now can’t live without.”