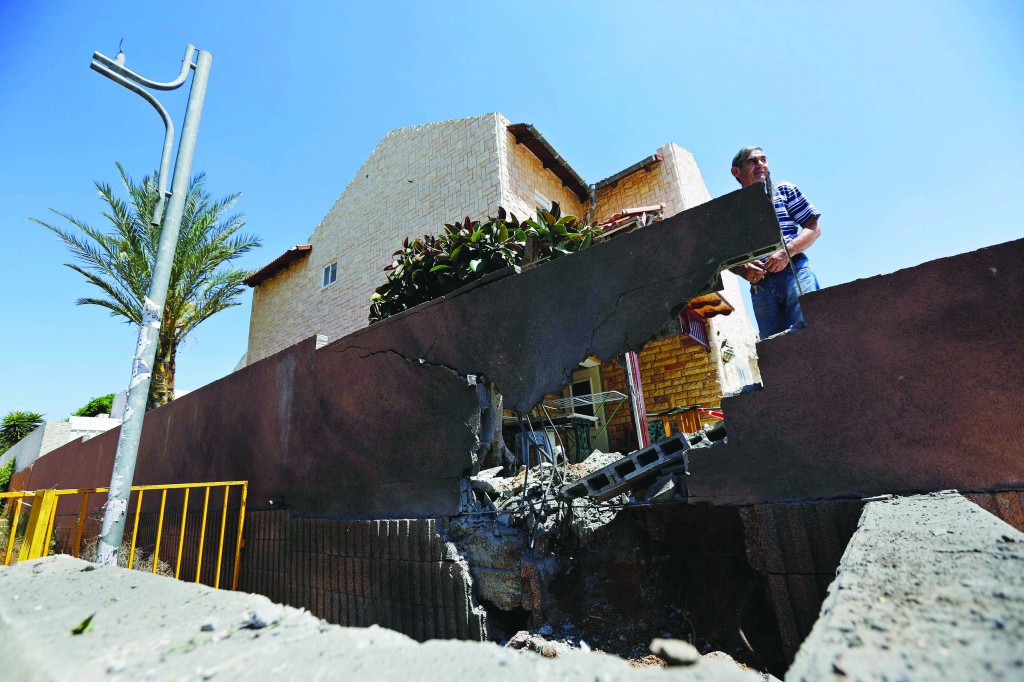 Israel moved some of its ground forces to the south of the country and carried out additional air strikes in Gaza on Thursday after terrorists launched rockets throughout the day from the Hamas enclave, four of which hit buildings in Sderot.

By midnight, the total for Thursday had reached 40 rockets and about 10 mortar shells.

Code Red alert sirens sounded in communities throughout the South, and thousands were forced to repeatedly run for cover during a very long day and night. One house in Sderot was almost totally destroyed, but the family, who were all in a reinforced room, were unhurt.

As a result of a mortar shell fired on the Eshkol Regional Council, an Israeli soldier was lightly wounded. Three civilians were also lightly injured. B’chasdei Shamayim, no serious injuries were reported.

Fifteen airstrikes were made during the day against Hamas training facilities, concealed missile launchers and weapons depots in Gaza, residents said, and Palestinians claimed that 15 people had been injured.

IDF Lieutenant-Colonel Peter Lerner told foreign journalists that troops were taking up “defense positions” in Israeli communities that have been struck by the rockets from Gaza. He did not give details on the scale of the deployment.

“We are moving and we have moved forces,” Lerner said. “Everything we are doing is to de-escalate the situation but on the other hand to be prepared if they don’t de-escalate.”

In an unofficial ultimatum, a senior security source was quoted on Thursday by The Jerusalem Post as saying that the coming 24 hours will tell whether Hamas has understood Israel’s message that rocket fire on the South must end.

“We’ll see what the bottom line is … whether Hamas understands our message … within 24 hours, and then we’ll weigh our steps,” the source said.

However, he reportedly stressed that “there is no call-up of reserves” or a large-scale military buildup under way.

Thursday’s developments presumably reflect the results of a security cabinet meeting held Wednesday night to decide on the way forward. Retaking Gaza, one of the suggested options, does not appear to be the option chosen.

“From a human rights point of view, I utterly condemn these rocket attacks and more especially I condemn Israel’s excessive acts of retaliation,” Pillay told journalists in Vienna.

Terrorist rockets struck two homes causing extensive damage in the southern town of Sderot, which has been a frequent target over the past few days.

One of the homes is being used by a summer day camp. The rocket landed just a few minutes before children were scheduled to arrive
for camp activities
on Thursday morning. Miraculously, the rocket did not explode, and the structural damage was from the impact of the projectile, Arutz Sheva reported.

Two of the rockets fired Thursday were intercepted by Iron Dome missiles.