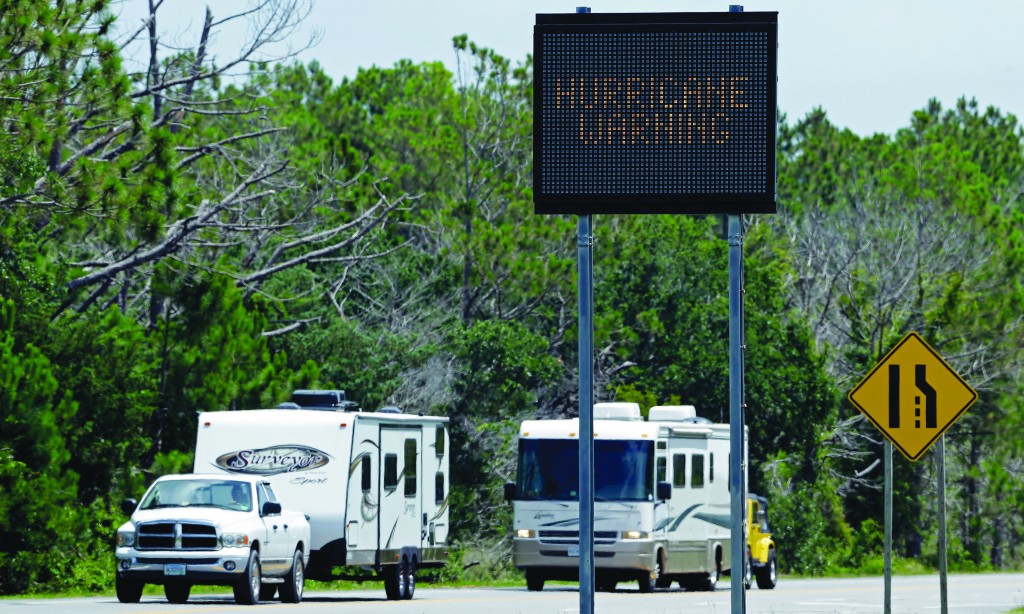 Hurricane Arthur gained strength in the Atlantic on Thursday and threatened to strike near the North Carolina coast on Independence Day, prompting thousands of vacationers and residents to leave parts of the state’s popular but flood-prone Outer Banks.

Ryan Witman, 28, had pre-loaded a Honda CRV and left Hatteras Island at 3:30 a.m. Thursday, beating the expected traffic jam. The island was under an evacuation order, with no traffic allowed in. Officials asked an estimated 35,000 residents and travelers to leave through North Carolina Highway 12, the only road on and off Hatteras.

Forecasters expect Arthur to speed up to a Category 2 storm and pass over or near the Outer Banks — a 200-mile string of narrow barrier islands with about 57,000 permanent residents — early Friday, bringing rain, heavy winds, storm surge and dangerous rip currents. Category 2 hurricanes pack winds of more than 96 mph.

“We don’t know for sure if the exact center of Arthur is going to pass over land or not. The chances have been increasing for that to occur with the last couple of forecasts. But even if the exact center doesn’t go over you, you will experience impacts tonight. The weather is going downhill in North Carolina, even as we speak,” said Rick Knabb, the director of the U.S. National Hurricane Center in Miami.

Before the storm hit, tourism officials had expected 250,000 people to travel to the Outer Banks for the national holiday weekend. Gov. Pat McCrory sought to strike a balance between a stern warning to vacationers and optimism that part of the busy weekend could be salvaged.

On Wednesday, he warned people to exercise extreme caution in traveling.

But the next day, even as the storm gathered strength, he said: “Of course, this holiday weekend, the July 4th weekend, is one of the biggest weekends for coastal tourism in the state, and we anticipate a beautiful weekend after the Tropical Storm Arthur or the Hurricane Arthur is out of North Carolina.”

Arthur, the first named storm of the Atlantic hurricane season, prompted a hurricane warning for much of the North Carolina coast. Tropical storm warnings were in effect for coastal areas in South Carolina and Virginia.

Farther north, an annual Boston concert and fireworks show was moved up a day because of potential heavy rain ahead of Hurricane Arthur.

Organizers and public safety officials said the celebration was rescheduled for Thursday, which appeared to be the best of two potential bad weather days. Other cities along the East Coast warned of weather conditions and potentially life-threatening rip currents.

If Arthur makes landfall in the U.S. on Friday, it would be the first hurricane to do so on July Fourth, according to National Hurricane Center research that goes back to the 1850s.