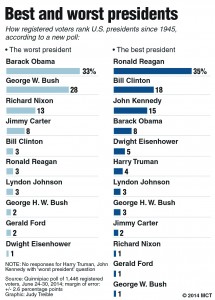 Two years into President Barack Obama’s second term, more voters say they are dissatisfied with his administration’s handling of everything from the economy to foreign policy, giving him the worst marks of any modern U.S. president, a poll on Wednesday said.

In a survey of 1,446 registered voters, 33 percent said Obama was the worst president since World War II, while 28 percent pointed to his predecessor, George W. Bush, as the worst, the poll by Quinnipiac University found.

Most voters said Ronald Reagan, who served two terms in the 1980s, was the best president since 1945, the survey showed.

“Over the span of 69 years of American history and 12 presidencies, President Barack Obama finds himself with President George W. Bush at the bottom of the popularity barrel,” said Tim Malloy, assistant director of Quinnipiac University’s polling unit.

While Obama’s job approval rating has inched higher to 40percent, up from 38 percent in December, more voters gave him largely negative marks in key areas: the economy, foreign policy, healthcare and terrorism, according to the poll.

This article appeared in print on page 2 of the July 3rd, 2014 edition of Hamodia.