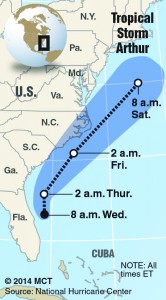 As one of the year’s busiest travel weekends approaches, so does another visitor: Tropical Storm Arthur, expected to grow into a hurricane by the Fourth of July and hit most harshly at North Carolina’s Outer Banks, a popular getaway spot of thin barrier islands along the shore.

The first named storm of the Atlantic hurricane season prompted a hurricane warning for a wide swath of the North Carolina coast and had officials, hotel owners and would-be vacationers as far north as New England carefully watching forecasts.

“We want everybody to be safe and prepared, but we are not overly concerned at this point,” said Lee Nettles, the executive director the Outer Banks Visitors Bureau. He noted that forecasters were predicting the storm would move
fast and be less severe than others in locals’ memories.

But flooding concerns remained: Twice in recent years, storm-driven waves have sliced North Carolina Route 12, the main road along the islands, rendering it unpassable. On Ocracoke Island, accessible only by ferry, a voluntary evacuation was announced.

Stores saw runs on generators, lanterns and flashlights, but even some workers weren’t yet concerned.

At a news conference, Gov. Pat McCrory advised residents, “Don’t put your stupid hat on.” With concerns of rip tides, he urged surfers and swimmers not to get in the water regardless of how good the waves might be.

“Our major goal is to ensure that no lives are lost during this upcoming storm,” including those of emergency workers, McCrory said. He declared a state of emergency for 25 coastal and adjoining counties.

On Wednesday afternoon, Arthur was about 220 miles south of Charleston and moving north about 7 mph with maximum sustained winds of 60 mph. The National Hurricane Center predicted it would grow to a Category 1 hurricane with sustained winds of at least 74 mph either late Wednesday or sometime Thursday.

The forecast did not call for a landfall in the U.S., but officials and travelers north to New England kept an eye on the storm’s projected path. Many areas warned of upcoming rain, wind and potential rip tides.

The worst of the storm should occur at Cape Hatteras, North Carolina, about dawn Friday, with 3 to 5 inches of rain and sustained winds up to 85 mph, said Tony Saavedra, a meteorologist at the National Weather Service. But forecasters said that by later Friday, the effects of Arthur would be past the Outer Banks, with the rest of the weekend salvaged.

The Hurricane Center predicted the storm would be off the coast of New England later in the day and eventually make landfall in Canada’s maritime provinces as a tropical storm.

This article appeared in print on page 3 of the July 3rd, 2014 edition of Hamodia.