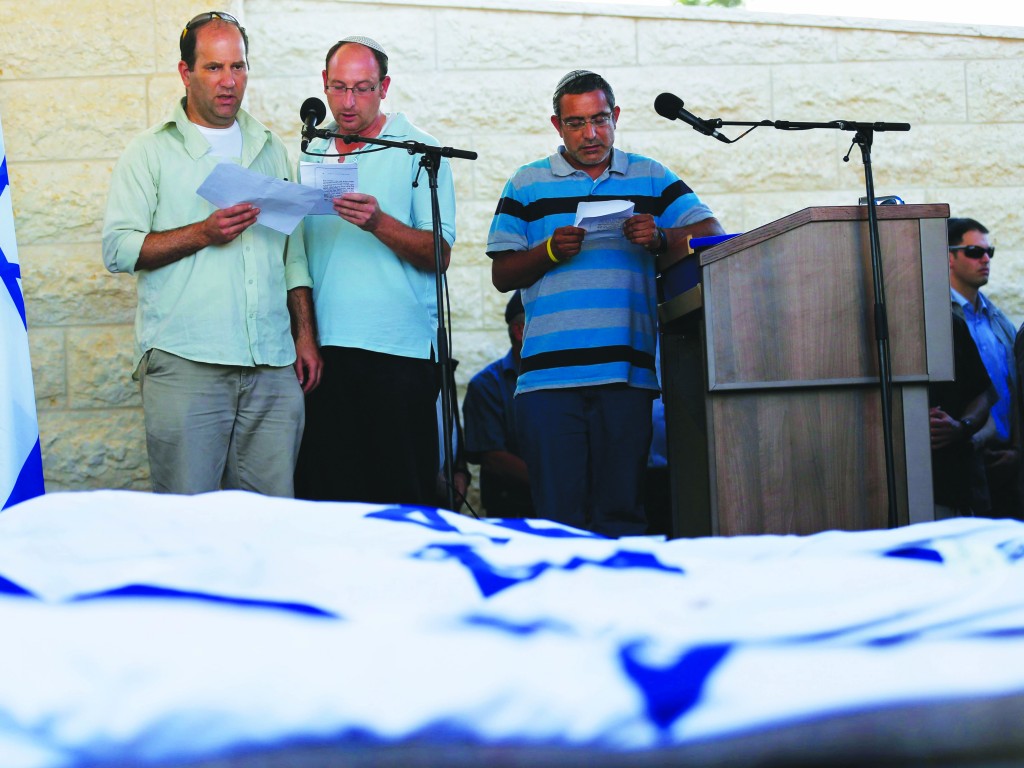 It was a national day of mourning in Israel on Tuesday as people across the country shared in the grief of the families of the murdered teenagers, Gilad Shaar, Eyal Yifrach and Naftali Frankel, Hy”d. Hopes and intense tefillos for their well-being and safe return continued until the tragic moment their bodies were discovered on Monday.

Hespeidim from parents and relatives, friends and public officials, Rabbanim and Roshei Yeshivos, were drenched in emotion and suffused with emunah and determination.

“Eyal, you are a tzaddik,” Uri Yifrach said in his hesped for his son.

“You had a special kind of love for any man … What else do you need? You told me many times, ‘If someone asks me for something, I can’t refuse.’

“We’re crying, but these are tears of strength and love,” he said.

“Your siblings want you near them, for you to come and give them a big hug. For you to hug Mom. Mom said that you are now right by Hashem’s side. She asked you to whisper to Hashem, ask Him to give her strength, to give all of us strength. It’ll be hard without you. We need strength. … You are a kadosh. You were holy in your lifetime. You gave strength to so many people. Now give us, your family, strength.”

Speaking of his son Gilad’s call to the police, Ofir Shaar said: “From the moment I heard your brave whisper, I heard a great voice and I stood taller. What resourcefulness, bravery and strength [for] someone not yet 17.

“My tallis is wrapped around your innocent body before you are interred into the land of Israel that you loved so much. You are a part of the family of Israel. Your last message and ascent to the heavens have ended the divides and united a whole nation,” Shaar said.

Ezra Shaar, Gilad’s grandfather, told reporters onTuesday that ,although no word had been received from the boys for over two weeks since their kidnapping, the news of their deaths on Monday still came as a shock.

“I wasn’t prepared for this [possibility],” Shaar said. “With all of the prayers, we really believed we would see them again alive.”

“Gilad is the second child of my eldest, Ofir,” he said. “He was the only son, along with four daughters.”

“Unfortunately, now, I’m talking about him in the past tense,” he added, trying to control his emotions. “He was a good kid, a gifted child — always smiling, even as a baby. He was a boy who loved to learn, to do everything for the community and for society; he was a counselor in Bnei Akiva. He loved his country; he took a lot of trips [around Israel].”

“I want to thank everyone for the prayers and unity throughout these 18 days,” Shaar stated. “I thank the people of Israel, I thank the IDF.”

Rachel Frankel also thanked those who had worked hard to find the boys: “Dear soldiers, intelligence forces, and police officers, we still thank you very, very much. You promised to bring them and you brought them. This is also a great chessed, which we do not take for granted. From the first day we said that even if the outcome is the worst one, Hakadosh Baruch Hu has bestowed us with an abundance of brachah. We are surrounded by the most wonderful people. …

“Rest in peace, my child. …We will always hear your voice in our hearts,” was Rachel Frankel’s eloquent farewell to her son Naftali.

“Dear Gilad,” said his mother, Bat Galin Shaar, “we were always particular to write your name as Gil-ad [always happy], with a hyphen, so that you should not chalilah be called Galed [a monument], and now, at the age of 16, we have erected a monument [for you].”

Mrs. Shaar continued to express bitachon that Hashem would help the family continue: “Hakadosh Baruch Hu, You entrusted us with six children, Gilad, an only son, and five daughters. You can be proud of your brother,” she turned to her weeping daughters. “I felt a great zechus all these years to be a mother to these children. Now we have to give back what has been entrusted to us; it was a deposit for such a short time.”

Avraham Frankel, father of Naftali, began with tzidduk hadin. “The ways of Hashem are hidden from us. We don’t know why you were taken, but your death has led this nation forward. They tell us there hasn’t been such a feeling in Am Yisrael for a long time. The … love and solidarity are unfathomable. Three boys that were murdered in cold blood have forged a path into the fine chords that make up our nation. They have caused us all to be better people, better Jews. The ways of Hashem are hidden, but your path has led the entire nation forward, and that serves as a comfort to us.”

He revealed that three days after the abduction, he wrote a hesped for his son, which he kept in his pocket. “I wanted to tell you, Naftali, that most of what I am going to say here, I wrote two weeks and one day ago. Today I know it was three days after you were murdered. Naftali, beloved child, when you were born, Ima and I emotionally recited the brachah of Hatov Vehameitiv together. Last night, we made a brachah together again, the brachah of Dayan Ha’emes. We won’t forget for one minute that you are our child and will always be. Rest in peace, dear son.”

A yeshivah roommate of Eyal Yifrach, Hy”d, said on Tuesday that his killing was a loss for the entire world and not just the Jewish people.

Speaking at the Shavei Chevron Yeshiva in central Chevron, Michael Zivan, 20, described Eyal as a strong personality, a friend and a brother.

One of the teachers in the yeshivah, Rabbi Mishael Rubin, explained how they were trying to see the deaths from a Jewish perspective.

“The boys mostly davened following the bitter news. These prayers are not in vain, and our main task is to grow into better people and better Jews.

“We tried to convey the idea that prayer is not only that you have certain goals for prayer which you wish to get answered and if those goals are not achieved then the prayer was ineffective,” Rabbi Rubin said.

“The prayer is also supposed to build something inside the person praying, for them to achieve higher personal and spiritual levels and build themselves further from there.”

The levayos began separately on Tuesday afternoon in the hometowns of the boys: the Shaars in Talmon, the Yifrachs in Elad and the Frankels in Nof Ayalon.

Then the bodies were taken for burial in Modi’in at about 5:30 p.m. There they converged in death, buried side by side, as in their lives they had converged in the study of the holy Torah.

Ashkenazi Chief Rabbi David Lau, shlita,  said that the entire Jewish people across the globe were shocked by “the despicable murders.”

“The boys who were murdered are a sanctification of G-d’s Name,” said Rabbi Lau, who cut short a visit to the U.S. because of the tragedy.  “[They were murdered] simply because they were Jews, and join the chain of martyrs and pure ones of our people who have been murdered throughout the painful history of the Jewish people.

“Hashem tells us, there are things we cannot understand,” Rabbi Lau stated. “I wanted to bring you closer to Me, says Hashem… And the [past 18 days] have brought us closer … closer to unity among the people of Israel.

“We have prayed for days and seen what a nation we have … Rest in peace, our brothers, our martyrs, in the soil of the land so close to your hearts,” he concluded.

Harav Dov Zinger, shlita, Rosh Yeshivah Mekor Chaim in Kfar Etzion, where Naftali and Gilad learned, recalled how “in recent days we saw your pictures everywhere, on posters, in newspapers. We saw your purity and your beauty.

“I remember seeing you on the same bench in the beis medrash, third row from the right, second seat in … [that seat is] still empty…”

“Dear Naftali, with your exceptional spiritual gifts, your ability to take quiet joy in small things. Our beloved Gilad, always searching for the truth, caring, wise in counsel. Ayal, I didn’t know you, but heard much about you, always willing to help, full of the joy of life, [you were a person] who lifted everyone’s mood in difficult times.”

“There were many tefillos. Many ask, where did the tefillos go? No tefillah is for naught. Every tefillah, every pledge to improve, will help Am Yisrael,” the Rav said, and added, “We will continue with the unity that we witnessed the past 18 days, despite the differences of opinion. These youths are now in a very high place Above.”

Rabbi Gideon Binyamin, shlita, Rav of the yishuv of Nof Ayalon, said, “The three children are korbanos tzibbur. They are no longer private children, but rather the children of Am Yisrael. Hakadosh Baruch Hu selects the best shlichei tzibbur, the most loyal ones, the most righteous ones. Woe to us that our children were selected.”

Then he turned to the parents and said: “You were chosen to be the Avraham Avinu of this generation, and your son, to be Yitzchak. We want to promise you one thing … we will always remember the korban olah that you sacrificed.”

At Modi’in, Prime Minister Binyamin Netanyahu praised the parents and families of the boys for their “inner strength” during the terrible trial.

Netanyahu observed that “today has spontaneously become a national day of mourning.”

President Shimon Peres said: “We prayed for a miracle; unfortunately, a tragedy occurred.”

Defense Minister Moshe Yaalon said, “Three mothers and three fathers are burying their son today. The sadness and grief that has surrounded you since you received the bitter news has surrounded the entire country as well.

“You, who raised your sons and made them who they are, will now carry their memory everywhere you go. In the 18 days that have passed since the kidnapping, we learned, every day that passed by, more and more about their personalities, their hobbies, the little things that show that they were teenagers in the beginning of the journey of life that was cut short.

“Eyal, Gilad and Naftali were kidnapped and murdered by wrongdoers, just because they were Jews. They were abducted and murdered in cold blood by those whose mission is to hurt the citizens of Israel and fight a daily war of attrition.

“They can’t defeat us!” Yaalon declared.

“We will not rest until we [apprehend] the kidnappers and bring them to justice,” he vowed.