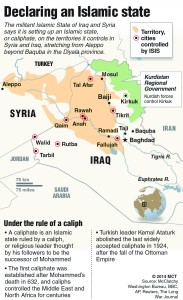 The leader of the terrorist group that seized much of northern Iraq and Syria called on Muslims worldwide on Tuesday to join the battle and help build an Islamic state in the newly conquered territory.

The 19-minute audiotape from Abu Bakr al-Baghdadi came two days after his organization, the Islamic State of Iraq and the Levant, unilaterally declared the establishment of an Islamic state, or caliphate, in the land it controls. It also proclaimed al-Baghdadi the caliph, and demanded that all Muslims around the world pledge allegiance to him.

In the statement, al-Baghdadi makes clear his global ambition and presented himself as the leader of all Muslims. With his group’s dramatic blitz in the heart of the Middle East, the Iraqi-born al-Baghdadi has made a bid to eclipse even al-Qaida chief Ayman al-Zawahri as the jihadi movement’s most influential figure.

He said the Islamic state is a land for all Muslims regardless of nationality, telling them it “will return your dignity, might, rights, and leadership.”

“It is a state where the Arab and non-Arab, the white man and black man, the easterner and westerner are all brothers,” he said – an appeal aimed at broadening his support base beyond the Middle East. “Muslims, rush to your state. Yes, it is your state. Rush, because Syria is not for the Syrians, and Iraq is not for the Iraqis.”

To help build that state, he appealed to those with practical skills — scholars, judges, doctors, engineers and people with military and administrative expertise — to come “answer the dire need of the Muslims for them.”

He also called on jihadi fighters to escalate fighting in the month of Ramadan, which began on Sunday.

Al-Baghdadi also urged Muslims worldwide to “Stand up and rise. For the time has come for you to free yourself from the shackles of weakness, and stand in the face of tyranny.”

The audio was posted on terrorist websites where the group has issued statements in the past, and the voice resembled that on other audiotapes said to be by the shadowy al-Baghdadi, an Iraqi terrorist who has rarely been photographed or appeared in public.

The Sunni insurgents’ advance in Iraq appears to have crested, at least for now, as it reaches Shiite-majority areas, where resistance is tougher, and as it seeks to consolidate its control of the territory already in hand.

But in neighboring Syria, the group has continued to advance. On Tuesday, it captured the town of Boukamal near the Iraqi border. Its fighters advanced toward the town of Shuheil, just to the northwest, a stronghold of a rival extremist group, the Nusra Front. As fighting between rival groups intensified later Tuesday, thousands of Shuheil’s inhabitants were seen fleeing the town, the Syrian Observatory for Human Rights said.

The Islamic State group also held a triumphant parade Monday evening in Raqqa, the largest city it controls in Syria. Fighters drove through the city displaying material apparently captured in neighboring Iraq — U.S.-made Humvees, heavy machine-guns, tanks and armored personnel carriers and a flatbed truck carrying what appeared to be a Scud missile.

After melting away in the initial onslaught, Iraq’s military and security forces have regrouped and managed to stem the tide at the outskirts of Shiite-dominated regions.

On Tuesday, Iraq’s new parliament deadlocked less than two hours into its first session when minority Sunnis and Kurds walked out, dashing hopes for the quick formation of a new government that could hold the country together in the face of the militant blitz.

Iraqi politicians are under pressure to quickly form a more inclusive government that can bring backing from the Sunni Muslim minority, which holds deep grievances with Shiite Prime Minister Nouri al-Maliki. Al-Maliki, who has held the post since 2006, is being pressed to step aside, with even most of his former allies blaming his failure to promote reconciliation for stoking Sunni support for the insurgency.

Acting speaker Mahdi al-Hafidh ended the proceedings after most of the 328-member legislature’s Sunni and Kurdish lawmakers did not return following a short break, depriving parliament of a quorum.

The impasse prolongs what has already been days of intense jockeying as political blocs try to decide on a prime minister, president and speaker of parliament.

This article appeared in print on page 3 of the July 2nd, 2014 edition of Hamodia.