Wave of Violence Sweeps NYC as Crime Ticks Up 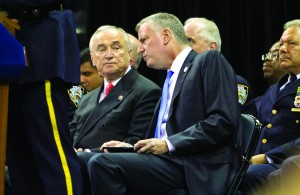 A wave of violence swept New York City over the weekend as 21 people were shot, four of them fatally, authorities said Monday.

The shootings, which included the separate woundings of 10- and 12-year-old boys, made for the third weekend in June that at least a dozen people were shot, police said. In the last week of June, 35 people were shot, down from 39 gunshot victims the same week a year ago, according to New York Police Department statistics.

This year, 611 people have been shot in the city compared with 554 for the same period last year. Some have blamed the slowing down of stop-question-and-frisk, which was effective in removing guns from dangerous areas. But Police Commissioner Bill Bratton said that it was a temporary blip.

“We’ve had an increase, a temporary increase, in shootings,” Bratton said. “Crime goes up, it goes down.”

After a crime drop in recent years, the spate of violence has raised alarms. A group of Brooklyn residents organized what they called an “emergency town hall meeting” Monday.

The bloodshed spilled into Monday, when a man demanding a job at an iron works in Brooklyn opened fire and wounded two employees, police said. He kept officers at bay for two hours before killing himself.

Bratton said more than 1,000 young graduates of the city’s police academy will soon be hitting city streets, partnering with veteran officers in the most violent neighborhoods.

Residents planned to meet Monday evening in Brooklyn’s 77th Police Precinct, which includes Crown Heights and Prospect Heights, where three people have died in 11 shootings since late May.

So far this year in the 77th Precinct, 23 people were shot, compared with 20 last year, according to NYPD figures.

This article appeared in print on page 6 of the July 1st, 2014 edition of Hamodia.