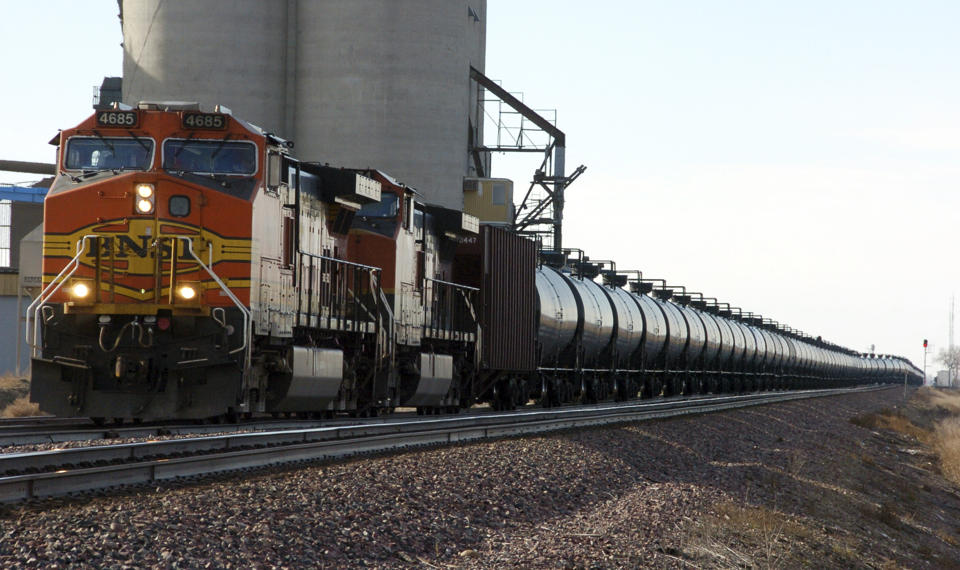 The dangers posed by a spike in oil shipments by rail extend beyond crude from the booming Bakken region of the Northern Plains and include oil produced elsewhere in the U.S. and Canada, U.S. safety officials and lawmakers said.

Acting National Transportation Safety Board Chairman Christopher Hart said all crude shipments are flammable and can damage the environment — not just the Bakken shipments involved in a series of fiery accidents.

Hart cited recent derailments in Mississippi, Minnesota, New Brunswick and Pennsylvania of oil shipments from Canada. He said those cases exemplify “the risks to communities and for the environment for accidents involving non-Bakken crude oil.”

Hart’s comments were contained in a letter to U.S. Sens. Ron Wyden and Jeff Merkley obtained by The Associated Press. They add to growing pressure on federal regulators to improve oil-train safety in the wake of repeated derailments, including in Lac-Magentic, Quebec, where 47 people were killed in a massive conflagration last July.

But Wyden and Merkley told Foxx on Thursday that the order leaves emergency personnel in the dark on oil shipped from outside the Bakken region.

The Oregon Democrats urged Foxx to expand his order to cover crude from all parts of the U.S. and Canada. They also pressed for the 1-million-gallon minimum threshold in Foxx’s order to be lowered to include smaller shipments.

“With the exception of the Lac-Megantic accident, every accident involving crude oil, ethanol and other flammable materials since 2006 has resulted in a hazardous materials release of less than 1,000,000 gallons,” Wyden and Merkley wrote to Foxx in a letter.

They said the derailments cited by the transportation safety board show that trains carrying non-Bakken crude or less than 1 million gallons pose the same “imminent hazard” that Foxx has asserted for Bakken oil.

On average, Bakken oil travels more than 1,600 miles to reach its destination, transportation officials said. That’s much farther than oil from some other parts of the country.

U.S. transportation officials said the lengthier journey increases the overall risk exposure for Bakken oil — and is one reason it’s being treated differently than other hazardous cargos.

Representatives of the oil industry and officials in North Dakota also have complained about Bakken oil being singled out by regulators — although for opposite reasons. The American Petroleum Institute and American Fuel and Petrochemical Manufacturers have argued Bakken oil is no more volatile than other light, sweet crudes.

The concerns aired Thursday by the NTSB and Oregon senators essentially flip that argument on its head, to say different types of crude and other hazardous liquids such as ethanol also pose a significant safety risk.

“Accidents involving crude oil or flammable liquids of any kind, especially when these liquids are transported in large volumes, such as in unit trains or blocks of tank cars, can have disastrous consequences,” Hart said.

Association of American Railroads spokeswoman Holly Arthur said the rail industry is complying with Foxx’s original order. She said the group would have to see the specifics of any proposed changes before commenting further.

About 700,000 barrels of oil a day — enough to fill 10 “unit trains” of 100 tank cars each — is coming out of the Bakken by rail, according to the North Dakota Pipeline Authority. That’s about 70 percent of crude-by-rail shipments nationwide, according to federal officials.

Yet the same hydraulic fracturing — or “fracking” — technology that has helped drive the boom in the Bakken region during the past decade is being employed on shale-oil fields elsewhere. Crude from the tar sands of western Canada is also fueling the surge in North American production.

According to an analysis done for the U.S. State Department, more than half the loading capacity of oil-train facilities built in recent years is in parts of the U.S. and Canada outside the Bakken region. That includes loading terminals in Colorado, Ohio, Oklahoma, Texas, Wyoming, New Mexico, Utah and parts of western Canada.