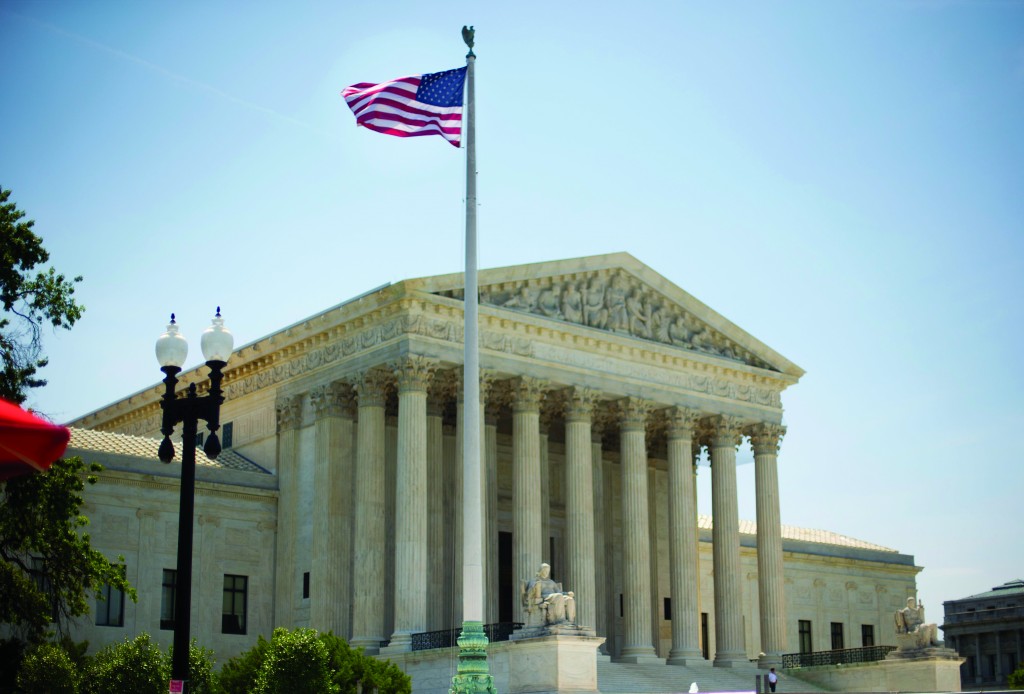 In a ruling hailed by religious rights activists and Jewish organizations, the Supreme Court ruled Monday for the first time that a federal religious-freedom law also applied to for-profit corporations controlled by families.

In 5-4 decision, the justices’ ruled that corporations can’t be forced by Obamacare to pay for medical measures that violate the religious beliefs of the owners.

The court stressed that its ruling applies only to corporations that are under the control of just a few people in which there is no essential difference between the business and its owners, like the Oklahoma-based Hobby Lobby chain of arts-and-craft stores that challenged the provision.

Alito also said the decision is limited to the specific coverage challenges in the lawsuit.

“Our decision should not be understood to hold that an insurance-coverage mandate must necessarily fall if it conflicts with an employer’s religious beliefs,” Alito said.

He suggested the administration could either pay for the coverage itself, or it could provide the same kind of accommodation it has made available to religious-oriented, not-for-profit corporations. Those groups can tell the government that providing the coverage violates their religious beliefs. At that point, the groups’ insurers or a third-party administrator takes on the responsibility of paying for it.

The accommodation is the subject of separate legal challenges, but the court said Monday that the profit-seeking companies could not assert religious claims in such a situation.

A coalition of Orthodox Jewish organizations had submitted a friend of the court brief in the case. Authored by noted Constitutional attorney Nathan Lewin of Washington, D.C., the brief was submitted by the National Jewish Commission on Law and Public Affairs (COLPA), together with Agudath Israel
and the following other
Jewish organizations: Agudas Harabbanim, National Council of Young Israel, Rabbinical Alliance of America, Rabbinical Council of America, Torah Umesorah, and the Union of Orthodox Jewish Congregations of America.  The brief argued that the Religious Freedom Restoration Act (RFRA) should apply to owners and managers of for-profit businesses, pointing out that restricting RFRA’s protection would have “a particularly harmful impact on Jewish Americans who observe Jewish ritual laws in operating individual or family-owned businesses.”

According to a stamen released by Agudath Israel of America, legal scholars who have analyzed today’s Supreme Court ruling, have noted that the Court’s majority relied heavily on the reasoning put forth by Mr. Lewin in his brief.

“Today’s Supreme Court decision is an extraordinarily important victory for religious freedom. It is especially gratifying as it comes at a time when free exercise of religion  is under increasing attack from many quarters on many issues.

“The ruling by the High Court affirms that religious freedom is, indeed, a freedom of the highest order, which deserves broad and strong protection under our law,” Rabbi Cohen continued.

“This protection should, as the court asserts, extend to businesses that are owned and operated by persons and families according to their sincerely-held religious beliefs.  No distinction is found or even contemplated in our Constitution or federal statute.  Americans of faith should not, and do not, forfeit their religious rights when they form family businesses and wish to make moral and ethical imperatives part of their corporate persona. The law allows our citizens to live their lives, personal and professional, as their preach, according to the dictates of their conscience. This is the essence of the American guarantee of the free exercise of religion.”

The Union of Orthodox Jewish Congregations of America also released a statement praising the ruling.

Nathan Diament, Executive Director for Public Policy for the OU, said that “the Supreme Court actualized the fundamental purpose of the First Amendment’s guarantee of the ‘free exercise’ of religion. In essence, the Court’s ruling stands for the proposition that — even when the government seeks to implement valuable policy goals — it must do so without trampling upon the conscientious beliefs of American citizens, especially, as is the case here, when there are many other ways to meet the policy goals without infringing on religious liberty.

“We hope that, in light of the Court’s ruling, the Obama Administration will now look to develop a new approach that will also allow the many pending lawsuits over religious liberty and the healthcare mandate to be settled,” Diament added.

Two years ago, Chief Justice John Roberts cast the pivotal vote that saved the health care law in the midst of Obama’s campaign for re-election. On Monday, dealing with a small sliver of the law, Roberts sided with the four justices who would have struck down the law in its entirety.

In a dissent she read aloud from the bench, Justice Ruth Bader Ginsburg called the decision “potentially sweeping” because it minimizes the government’s interest in uniform compliance with laws affecting the workplace. “And it discounts the disadvantages religion-based opt outs impose on others, in particular, employees who do not share their employer’s religious beliefs,” Ginsburg said.