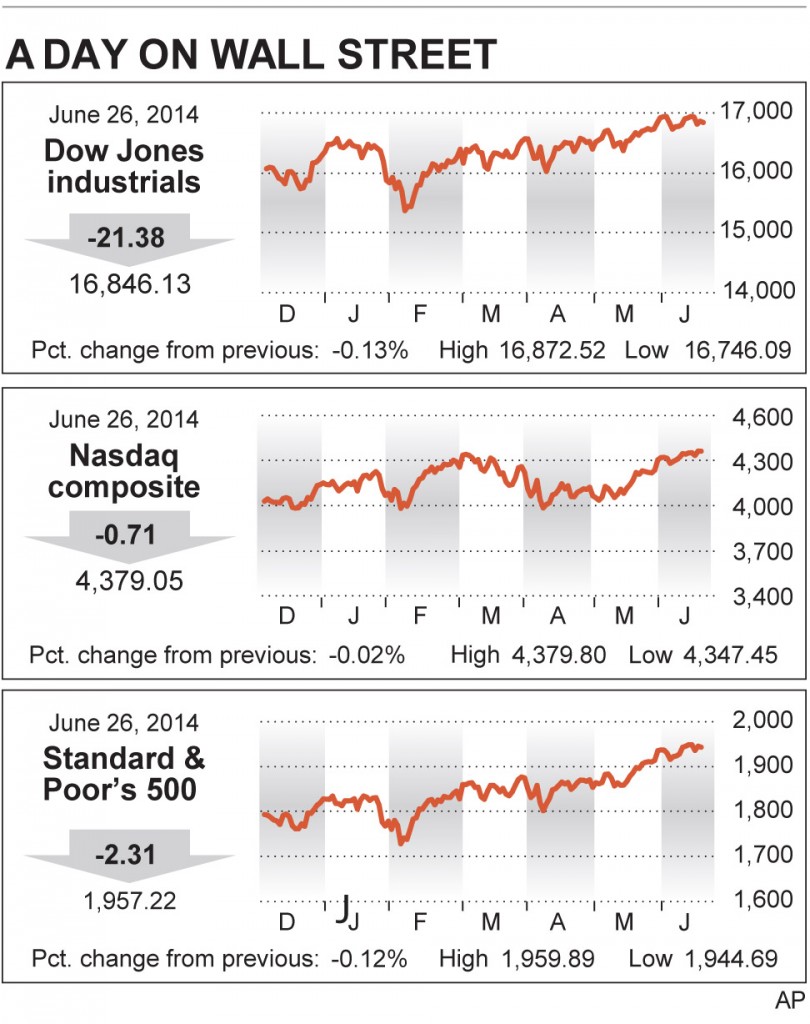 Banks and other financial firms tugged the stock market slightly lower Thursday as a mixed batch of economic reports and earnings results gave investors little reason to push the market up.

It was only the third loss in 10 trading days for the Standard & Poor’s 500 index, which closed at its latest record high just under a week ago, on June 20. Many investors have been saying stocks could be due for a pullback given their rapid rise recently.

Phil Orlando, chief equity strategist at Federated Investors, said a short slump in the summer months wouldn’t come as a surprise. “I fully expect to see a hiccup here, but I wouldn’t get too worried about it,” he said. “It’s probably going to set us up for a nice end-of-the-year rally.”

Two economic reports out early Thursday offered little encouragement. In one, the government said the number of Americans seeking unemployment benefits declined last week, another sign that an economic slowdown earlier this year hasn’t caused employers to shed workers. In a separate report, the government said consumer spending inched up 0.2 percent last month, half the increase that economists had predicted.

Among the stocks making big moves, Bed Bath & Beyond sank 7 percent, the biggest loss in the S&P 500, after the retailer posted quarterly earnings and sales late Wednesday that fell short of analysts’ estimates. The store’s stock dropped $4.41 to $56.70.

GoPro jumped 31 percent in its stock-market debut. The company, whose cameras get strapped to the heads of skydivers, extreme skiers and surfers, raised $427 million in its initial public offering Thursday. GoPro soared $7.34 to $31.34 in its first day of trading on the Nasdaq stock market.

With one trading day left in the week, the S&P 500 is on track for its second weekly loss this month. That shouldn’t worry anyone, said Randy Frederick, managing director of active trading and derivatives at the Charles Schwab Center for Financial Research. As the stock market set a series of all-time highs this spring, more traders began laying bets in the options market that the market would take a fall, if only for technical reasons. Markets can only go so far in one direction.

“There’s nothing to get panicked about,” Frederick said. “We haven’t had a real pullback in a while. And when we have one, they turn out to be buying opportunities. This time is no different.”

In the market for government bonds, the yield on the 10-year Treasury note dropped to 2.52 percent from 2.56 percent late Wednesday. Bond yields fall when prices rise.

Among companies in the news:

— Alcoa plans to acquire Firth Rixson, a British maker of jet-engine parts, for $2.9 billion, as the company continues to shift away from its aluminum-smelting roots. Alcoa’s stock rose 39 cents, or 3 percent, to $14.94.

— Iron Mountain soared $5.97, or 20 percent, to $35.74 after the information storage and management company said it is moving ahead with its conversion to a real estate investment trust, which could reduce taxes and increase returns for stockholders.