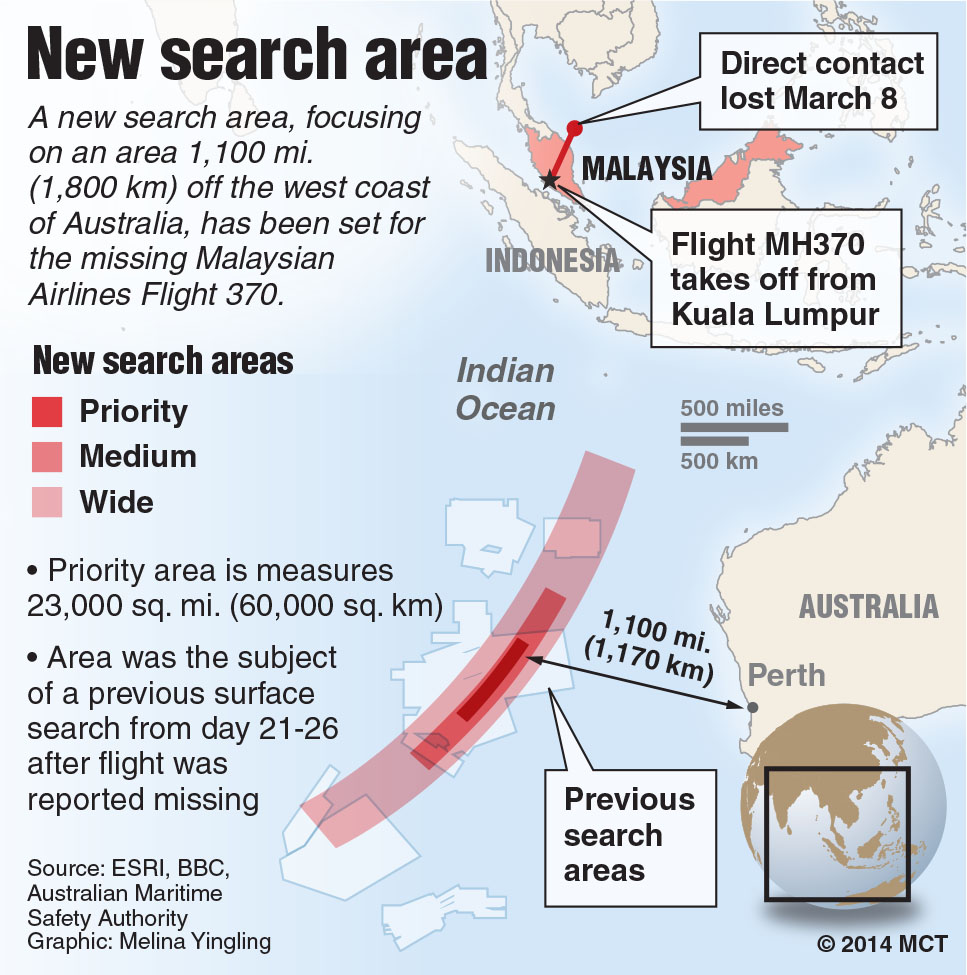 Australian authorities said Thursday that a 23,000-square-mile area in the southern Indian Ocean had been designated as a new focus zone where searchers will look for missing Malaysia Airlines Flight 370. Analysts who helped define the area said in a report the crew was probably deprived of oxygen and unresponsive in the final hours of the flight.

Experts from Boeing and the U.S. National Transportation Safety Board were among the specialists who helped define the zone, based on satellite data and analysis of previous similar incidents.

The new zone, about 1,100 miles west of Perth, Australia, is farther south than where previous intensive search efforts were carried out this spring after the plane vanished March 8 with 239 people aboard. The flight was en route from Kuala Lumpur to Beijing when it went missing.

Intensive searching involving aircraft, ships and a robotic submarine in March, April and May yielded no wreckage or other conclusive signs of the Boeing 777. The cause of the plane’s disappearance remains undetermined, although investigators have said they believe that it was the result of deliberate action of someone aboard the jet.

In the analysts’ report, released Thursday by the Australian Transport Safety Bureau, they noted that for the five hours leading up to the aircraft’s final electronic “handshake” with a satellite, there seemed to be no large changes to the aircraft’s flight path, and there was no radio communication.

Based on that and other factors, they concluded, “the final stages of the unresponsive crew/hypoxia event type appeared to best fit the available evidence for the final period of MH370’s flight when it was headed in a generally southerly direction.”

Australia Deputy Prime Minister Warren Truss said the search was continuing with a mapping of the ocean floor in the newly defined area, to be followed by a comprehensive seafloor search.

The seafloor search, he said, should start around August and be completed within one year. The area is 58 miles wide and 400 miles long, covering an area as big as Lake Huron, the second-largest of the U.S. Great Lakes. By comparison, the area searched with a robotic, sonar-equipped submarine in May was 330 square miles.