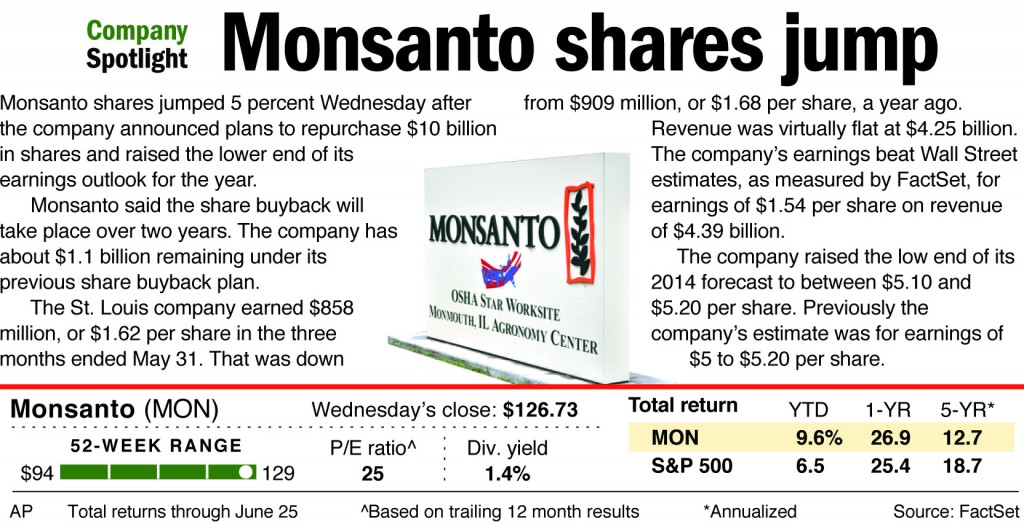 The U.S. stock market inched modestly higher Wednesday, recovering more than half of what it lost the day before, as investors were able to set aside two disappointing economic reports.

CBS and other broadcasters rose after the Supreme Court ruled in favor of them over a startup internet company in a closely watched copyright case. Monsanto rose after the agricultural company announced a big stock buyback and reported earnings that beat analysts’ estimates.

“The trend for this market is still, for the time being, up,” said Anastasia Amoroso, a global market strategist with J.P. Morgan Funds.

Consumer discretionary stocks were among the biggest advancers, a sector that includes broadcasters and other media companies. The U.S. Supreme Court ruled Aereo would have to pay broadcast companies when it takes programs from the airwaves and allows subscribers to watch them on smartphones and other portable devices.

It was a major win for the broadcast industry, which had argued that Aereo should have to pay for programming the same way cable and satellite providers have to.

In a revised estimate, the Commerce Department said the U.S. economy shrank at an annual rate of 2.9 percent in the first three months of the year. Two-thirds of the downward revision reflected a decline in healthcare spending. The Commerce Department also said orders for long-lasting goods sank 1 percent in May as demand for military equipment fell sharply.

“GDP for the first quarter was not bad, it was horrible,” said Doug Cote and Karyn Cavanaugh of Voya Investment Management, in a note to investors.

Investors said the GDP report didn’t tell them anything they did not know. Many have already attributed weakness in the U.S. during the first three months of the year to unusually harsh winter weather.

“We need to be looking toward earnings season next month, not at a report from three months ago,” JPMorgan’s Amoroso said.

Pioneer Natural Resources and Enterprise Products rose after The Wall Street Journal reported that the U.S. government was loosening a longstanding ban by letting those two companies sell a certain kind of unrefined American oil internationally. The newspaper said the Obama administration would allow foreign buyers to purchase a type of ultralight oil known as condensate, which can be turned into gasoline, jet fuel and diesel.

— Monsanto’s earnings fell more than 5 percent but its overall results still beat analysts’ estimates. The company, which sells corn and soybean seeds, also announced plans to spend up to $10 billion on buying its own stock. Monsanto rose $6.10 to $126.73.

— Barnes & Noble rose $1.09, or 5 percent, to $21.65 after the bookseller said it would split into two publicly traded companies, one focused on retail bookselling and one on its Nook Media business, which sells electronic reading devices.