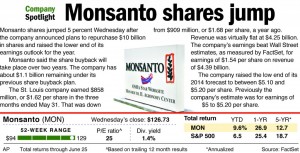 Monsanto said its earnings fell more than 5 percent in the third fiscal quarter on lower sales of biotech seeds, but its performance still topped Wall Street estimates and the company raised its 2014 outlook. It also announced plans to repurchase $10 billion in shares.

Monsanto Co. said the $10 billion share buyback will take place over the next two years. The company has about $1.1 billion remaining under its previous share-buyback plan.

Analysts polled by FactSet had expected Monsanto to report earnings of $1.54 per share on revenue of $4.39 billion for the quarter.

The company reported a 16 percent decline in sales of genetically engineered corn seeds, its best-selling product. Farmers in the U.S. and abroad have been switching from corn to more profitable soybeans.

This article appeared in print in the June 26th, 2014 edition of Hamodia.