National ‘Get a Warrant’ to Search Cellphones, Justices Say
National 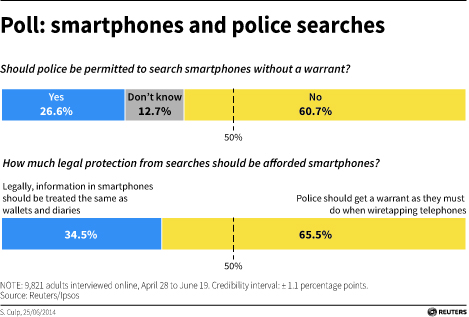 In an emphatic defense of privacy in the digital age, a unanimous Supreme Court ruled Wednesday that police generally may not search the cellphones of people they arrest without first getting search warrants.

Cellphones are unlike anything else police may find on someone they arrest, Chief Justice John Roberts wrote for the court. They are “not just another technological convenience,” he said, but ubiquitous, increasingly powerful

“With all they contain and all they may reveal, they hold for many Americans the privacies of life,” Roberts declared. So the message to police about what they should do before rummaging through a cellphone’s contents following an arrest is simple: “Get a warrant.”

The chief justice acknowledged that barring searches would affect law enforcement, but he said: “Privacy comes at a cost.”

By ruling as it did, the court chose not to extend earlier decisions from the 1970s — when cellphone technology was not yet available — that allow police to empty a suspect’s pockets and examine whatever they find to ensure officers’ safety and prevent the destruction of evidence.

The Obama administration and the state of California, defending cellphone searches, said the phones should have no greater protection from a search than anything else police find. But the defendants in the current cases, backed by civil libertarians, librarians and news media groups, argued that cellphones, especially smartphones, can store troves of sensitive personal information.

“By recognizing that the digital revolution has transformed our expectations of privacy, today’s decision is itself revolutionary and will help to protect the privacy rights of all Americans,” said American Civil Liberties Union legal director Steven Shapiro.

Under the Constitution’s Fourth Amendment, police generally need a warrant before they can conduct a search. The warrant itself must be based on “probable cause,” evidence that a crime has been committed.

In the cases decided Wednesday, one defendant carried a smartphone, while the other carried an older flip phone. The police looked through both without first getting search warrants.

Roberts said there’s no comparison between cellphones and packages of cigarettes and other items that were at issue in the earlier cases.

Canada’s Supreme Court ruled last year, much as the U.S. justices did, that officers need a specific warrant to search a computer or a cellphone because the devices “give police access to an almost unlimited universe of information.”

In Britain, however, warrantless searches of cellphones and other electronic devices are routine; London police stations are even equipped with special devices to suck data from the phones of arrestees as they’re booked.