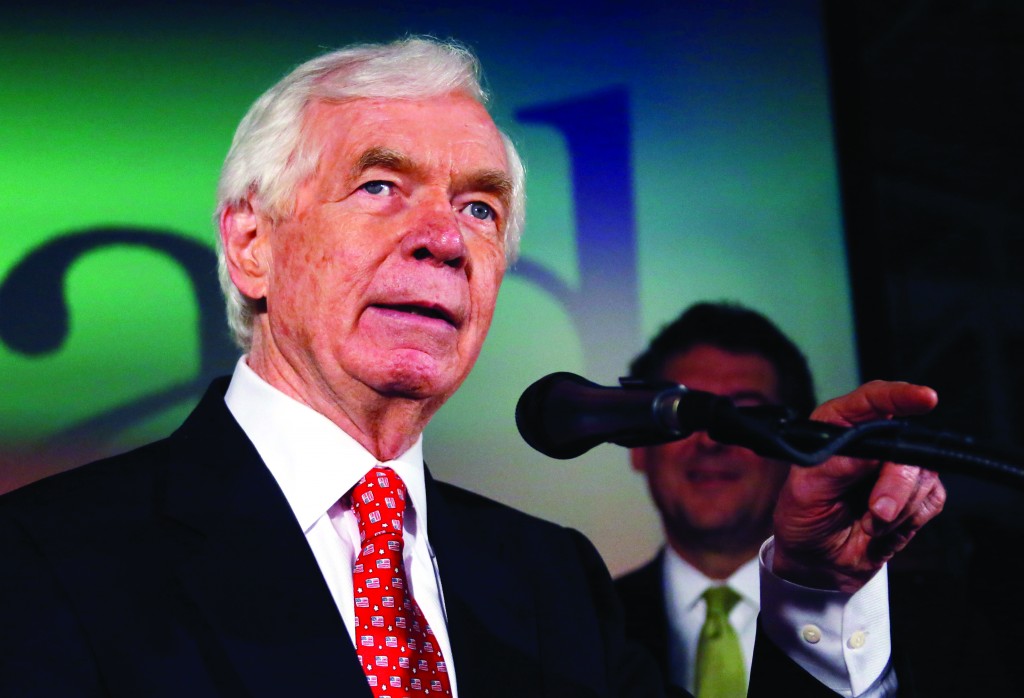 Washington’s political establishment offered a sober assessment of the tea party movement Wednesday after six-term Sen. Thad Cochran’s narrow win in Mississippi: The upstarts are down but not out.

“You cannot underestimate the anti-Washington feeling which translates into anti-incumbency, and it’s out there and it’s viable,” Sen. John McCain (R-Ariz.) told reporters at a breakfast organized by The Wall Street Journal.

Still, McCain welcomed Cochran’s comeback win as historic after a nasty, costly primary that forced a three-week sprint to Tuesday’s runoff. With 99 percent of precincts reporting, Cochran held a 6,373-vote advantage over tea party favorite Chris McDaniel, who has refused to concede the race.

Unsuccessful in earlier Republican primaries in Kentucky, Georgia and North Carolina, outside conservative organizations and tea party groups had invested millions in Mississippi in hopes of knocking out Cochran. They have few chances to reverse the trend in the remaining contests before November’s elections.

In another setback for the tea party, two-term Rep. James Lankford of Oklahoma won the GOP nomination in the race to succeed Sen. Tom Coburn, who is stepping down with two years left in his term. In the solidly Republican state, Lankford is all but assured of becoming the next senator. Part of the House GOP leadership, Lankford defeated T.W. Shannon, a member of the Chickasaw Nation and the state’s first black House speaker, who was backed by former vice presidential candidate Sarah Palin and Texas Sen. Ted Cruz, two stalwarts of the right.

The Republican establishment blames the tea party movement and outside groups for costing it Senate seats — and majority control — in 2010 and 2012. Leaders in Washington were determined to avoid the same fate this election cycle, when they have a legitimate shot at netting the six seats to control the Senate. Cochran’s win goes a long way to helping the GOP achieve its goal.

In a last-ditch effort, Cochran reached out to traditionally Democratic voters — blacks and union members — who could cast ballots in the runoff. That possible factor in Cochran’s victory was cited by critics in days and weeks to come.

At the Cochran party, Ronny Barrett, a 56-year-old mechanic from Jackson, said that until the June 3 primary, he had always voted for Democrats, but he decided to support Cochran after following news coverage and talking to friends.

Cochran, a stalwart of the Senate Appropriations Committee, has funneled billions to his home state, one of the poorest in the nation, since he won a U.S. House seat in President Richard Nixon’s GOP wave of 1972 and then was elected to the Senate in 1978.

The Mississippi contest was the marquee race on a busy June primary day.

In Colorado, former Rep. Bob Beauprez won a crowded gubernatorial primary that included 2008 presidential candidate Tom Tancredo, an immigration opponent. That was welcome news to national Republicans who feared that Tancredo could be a drag on the GOP ticket in November. Beauprez will face Democratic Gov. John Hickenlooper.

In Mississippi, outside groups, from tea party organizations to the U.S. Chamber of Commerce, spent some $12 million on the GOP Senate runoff. Former Green Bay Packers quarterback — and Gulfport, Mississippi, native — Brett Favre called the 76-year-old Cochran a “proven and respected leader” in one Chamber ad.

In November, Cochran will face Democrat Travis Childers, a former congressman, in the heavily Republican state.