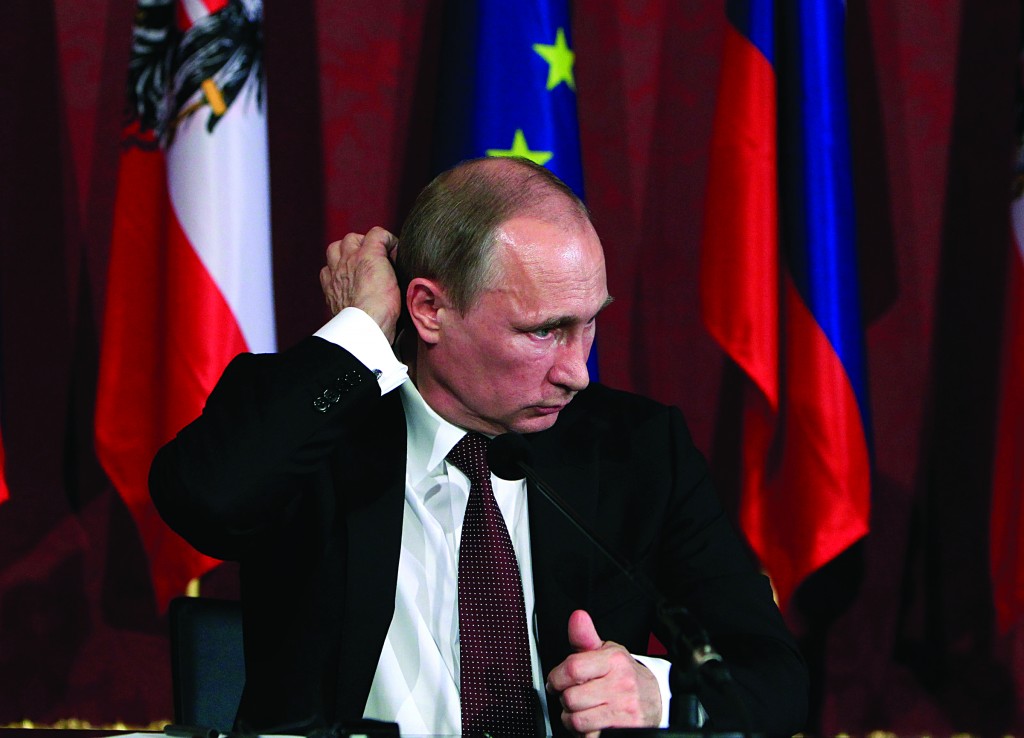 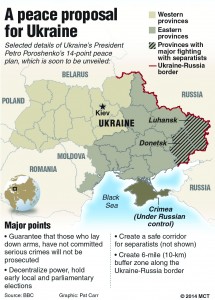 The shaky cease-fire in Ukraine was thrown into peril Tuesday when pro-Moscow separatists shot down a Ukrainian military helicopter, killing nine servicemen.

Ukrainian President Petro Poroshenko warned he may end the weeklong truce ahead of time. The deadly attack came a day after the rebels vowed to respect the cease-fire, which began last Friday.

Russian President Vladimir Putin, meanwhile, played the peacemaker, urging Ukraine to extend the truce and sit down for talks with the rebels. He also moved to rescind a parliamentary resolution authorizing him to use the Russian military in Ukraine.

Poroshenko declared the cease-fire as part of a plan to end two months of fighting between government troops and pro-Russian insurgents in the east. The violence, which erupted after the Kremlin’s lightning annexation of Crimea in March, has left hundreds dead.

The cease-fire has been repeatedly broken by sporadic clashes, and it was violated again Tuesday when rebels used a shoulder-fired missile to down a helicopter in Slovyansk, a key flashpoint in the insurgency.

Poroshenko said in a statement that the insurgents had fired on Ukrainian positions 35 times since the cease-fire was announced, and he instructed Ukrainian soldiers to fire back “without hesitation” if attacked.

“The president doesn’t exclude that the cease-fire could be lifted ahead of time, taking into account its constant violation by the rebels controlled from abroad,” Poroshenko’s office said.

It added that Poroshenko expects that his phone call, set for Wednesday, with Putin, German Chancellor Angela Merkel and French President Francois Hollande would lead to “practical steps by Russia to disarm and recall mercenaries from Ukraine and ensure the reliable protection of the border.”

The U.S. and NATO have accused Russia of supporting the rebellion in the east with troops and weapons. Moscow has denied that, saying Russian citizens who joined the insurgents were acting on their own.

During a trip Tuesday to Vienna, Putin employed a combination of pressure and goodwill intended to protect Moscow’s interests without triggering heavier Western sanctions, which are likely to be a topic of discussion during a European Union summit on Friday.

Putin said that the Ukrainian demand that the insurgents lay down their weapons within a week was unrealistic, explaining that they would be reluctant to disarm for fear of government reprisals. He called for a longer truce to be accompanied by peace talks, arguing that they should lead to constitutional amendments and other legal changes that would protect the rights of Russian-speakers in the east.

“We hope that the cease-fire will be extended and it will be used for substantive talks,” Putin said.

Speaking shortly after the helicopter was shot down, Putin blamed Ukrainian forces for breaking the cease-fire on Tuesday by launching an airborne raid in Slovyansk. He did not mention the downing of the helicopter.