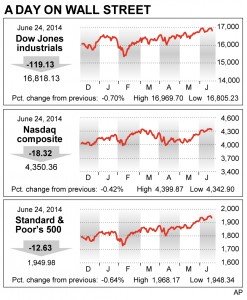 The stock market had its biggest decline in two weeks Tuesday, led by a sell-off in blue-chip bank and energy stocks. Homebuilders rose after the government reported sales of new homes rose in May to the highest level in six years.

The selling in blue-chip stocks marks a recent and notable change in trader behavior. Stocks of large, diversified companies have been among the most popular with investors this year. With the quarter end and mid-year approaching, it’s not uncommon for investors to sell some of the best performing names to rebalance their portfolios.

Vertex Pharmaceuticals was a bright spot in the S&P 500. The drug company soared $26.92, or 40 percent, to $93.53 after Vertex said its treatment for cystic fibrosis appeared to work better than a placebo in a late-stage study. Vertex plans to seek approval for the treatment in the U.S. and Europe.

Traders say it’s a positive sign to see investors heading back into biotechnology stocks. The sector was among the hardest hit in March and April. Even with today’s declines, the S&P 500 Biotechnology index rose 1.3 percent.

“That was a growth area that worried a lot of people, but the news out of Vertex is very bullish,” said Ian Winer, director of stock trading at Wedbush Securities. “The news has renewed a risk appetite in that space we have not seen in months.”

Micron Technology jumped $1.24, or 4 percent, to $32.50, making it the second-biggest advancer in the S&P 500. The semiconductor maker reported better-than-expected earnings and raised its forecast for the next quarter. Dow component Intel, another major chipmaker, rose 27 cents, or 0.9 percent, to $30.50.

Homebuilder stocks also did well Tuesday after the Commerce Department said sales of new homes jumped 18.6 percent in May to an annualized rate of 504,000. That’s the highest level since May 2008.

International concerns remain an issue for investors as well. The United Nations said Tuesday that more than 1,000 people, mostly civilians, have been killed in Iraq so far this month, the highest death toll since the U.S. military withdrew from the country in December 2011. In the United Arab Emirates, Dubai’s stock market fell 6.7 percent Tuesday and Abu Dhabi’s fell 3.3 percent.

Bond prices rose as investors sought safety amid the stock market declines. The yield on the 10-year Treasury note fell to 2.58 percent from 2.63 on Monday.

This article appeared in print on page 26 of the June 25th, 2014 edition of Hamodia.

Mayor Adams to Attend Summit Against Antisemitism in Greece Next Week