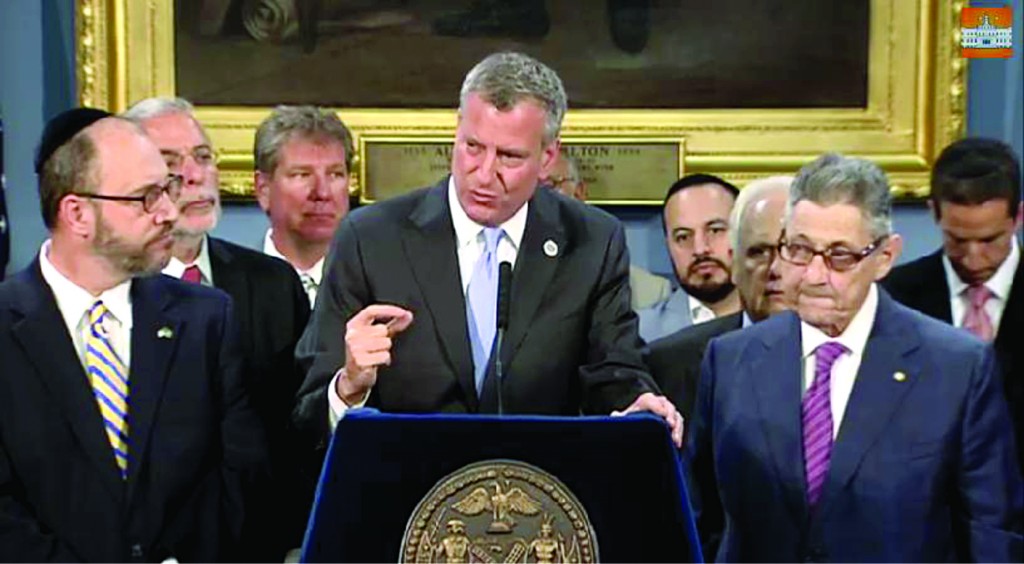 Bringing a final settlement to an issue that has for decades vexed Orthodox parents of New York City’s special needs children, Mayor Bill de Blasio announced Tuesday that beginning in September the city will remove much of the bureaucratic red tape that was described by parents as a recurring nightmare.

The new rules, which give the city 15 days to rule on a private school placement and bar them from changing the placement as long as the child’s needs remain the same, was greeted as historic by its advocates, which include state Sen. Simcha Felder and
Assemblywoman Helene Weinstein, as well as Agudath Israel of America.

Flanked by an array of legislators, and with about a dozen members of Agudah’s leadership present, de Blasio announced the new policy at a City Hall news conference, Assembly Speaker Sheldon Silver at his side.

“I do want to make clear that we’ve got immense capacity to serve kids with special needs and we do it well,” de Blasio said. “But clearly there are some families whose needs cannot be met. And that is where the conflicts have come in and that’s where we want to act decisively to end the conflict and find an appropriate way forward.”

The new rules are indeed historic, with nearly 1,000 parents of special needs children experiencing, as one parent told Hamodia, “tremendous amount of anxiety and stress going into the process of planning for my son.”

“This is a very real tangible issue,” de Blasio noted. “This is not an abstract public policy issue. “[The way the city has treated parents of special needs children until now] is not acceptable, that is not what any one of us here came here to allow to happen.”

“This is an accomplishment long in the making,” said Weinstein, who took up the issue three years ago and made it her top legislative priority since. “I have at times been in shock at the opposition. … These parents, often their child’s best advocate, will [now] be able to spend their time caring for their children and not get bogged down defending their child’s rights.”

“I have had extensive conversations with the mayor about this,” said Felder, whose impassioned speech on the topic three weeks ago gave added impetus to the deal. “He indicated that, more than ever, he will ensure that families and special-needs children get their services expeditiously, but more importantly, compassionately.”

Mrs. Leah Steinberg, director of Agudah’s special education affairs who first dreamed of it more than a decade ago, said it was “wonderful” to finally be able to inform parents that change was coming.

“I am totally — I’m so shocked — in a good way,” she told Hamodia. “All of a sudden, everyone is on the wagon. … This is what I was dreaming about.”

The breakthrough deal announced late Thursday was hastily arranged after the state Senate passed the bill sponsored by Felder and Sen. John Flanagan two weeks ago and minutes after Silver rounded up the necessary majority in his chamber to pass the bill sponsored by Weinstein on the final day of session.

It mandates the Department of Education to settle with the parents on a non-public school placement within 15 days, and then they must refrain from relitigating once it is settled. Additionally, once both sides agree on where the child should be placed, they must reimburse the parents for tuition on a monthly basis — starting within 30 days.

This compares to the length of time it currently takes for parents to see any money, even though timely reimbursement is required by the state Constitution. Parents do not know the outcome until May or later, in a year that began the previous September. This means that parents have been agonizing how they will pay tuition until the school year is almost over.

“Starting this fall,” de Blasio vowed, “when parents of children with disabilities seek tuition reimbursement, things will be different.”

“If a nonpublic school can provide for those needs,” affirmed Silver, “then a special-needs child should be there. In such cases, the federal law requires the city to reimburse families for the costs of individually tailored programs even if those programs are provided in private school settings.”

The bill also required that any settlement or determination by a court in favor of the parent’s placement set forth the timeline for making payments and include the amount of the payment.

But perhaps most importantly, the deal would keep any placement agreed upon for the life of the child, without parents having to renegotiate each year.

“We’ve said to our colleagues in the legislature,” he added, “we want to clean our own house. … We will prove it through our actions. And let me remind you, legislation doesn’t go away, it’s always there and if they feel our actions are insufficient they will retain their rights.”

De Blasio said he reserved the right to take legal action if parents do not cooperate or make illogical claims. “But that will be the exception, not the norm,” he said.

The city has about 170,000 special needs children, de Blasio said; only a few thousand of them will be affected by the legislation. Schools Chancellor Carmen Farina was charged with implementing the changes.

While legislation would require the city to do what the deal laid out, all sides said they were happy with the agreement.

“If you give your word in front of all of you [the media], an agreement with our colleagues in the legislature who we have to work with all the time — it does have teeth,” the mayor said.

“We always reserve the right to come back,” said Silver, following de Blasio to the podium. “Assemblywoman Weinstein will be there, Sen. Felder will still be in the legislature. But knowing Mayor de Blasio I’m confident we won’t come to that.”

Turning personal, de Blasio, a former councilman who represented parts of Boro Park, said that “for years I felt that there was an injustice that had to be met.” He said that his children, Chiara and Dante, had gone to an “inclusion school,” where special-needs children made up half the student population.

“It’s hard to be a parent in New York City,” de Blasio noted. “[But] it’s doubly hard when you are a parent of special-needs children.”

Silver said in his statement Thursday night that if the city does not show a change by September, “the Assembly stands ready to act on legislation.”

This was the third attempt in three years to resolve legislatively the problem parents have in sending their children to a school that is appropriate for them.

The first attempt at passage of the bill came in 2012, requiring cities in New York to take “home background” into account when deciding on a placement. But teachers’ unions and then-New York Mayor Michael Bloomberg opposed it, leading to a veto by Gov. Andrew Cuomo. A modified bill limiting its parameters to cities “with more than a million residents” — or just New York City — passed last year but it was too late for the Cuomo’s signature.

This year’s bill — and the deal announced on Tuesday — further limited it by removing the terms “cultural background,” meaning that the Individualized Education Program form governs whether a child gets approved for private school placement.

Chaskel Bennett, an Agudah trustee who played a key role in shepherding the bill through the legislature, said that the people who brought the issue to the fore “are deserving of enormous appreciation.”

“After three long years in the legislative trenches, Agudah advocates finally see a glimmer of hope for the special-needs families that need it the most,” he told Hamodia, adding that Felder’s and Weinstein’s “determination to see this legislation through to its completion were a major force. They and their colleagues are deserving of enormous appreciation for getting us to this day.”

On the list of who spearheaded the bill from its infancy to see it become official city policy today includes Leon Goldenberg, Rabbi Shmuel Lefkowitz of Agudah and Rabbi Shiya Ostreicher.

“Today is about the families and the children, and it is an historic day,” Felder said at the conference. “Thousands of parents with special-needs children throughout the entire city, throughout every neighborhood in this city, have been going through a painful and torturous process for many years.”