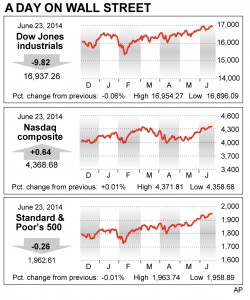 Stocks fell for the first time in seven days, ending a run that had pushed the indexes to all-time highs, as investors assessed corporate news.

Chemical company FMC fell the most in the Standard & Poor’s 500 index after cutting its earnings forecast for the second quarter due because its Agricultural Solutions unit performed worse than expected in the period. General Electric and Wisconsin Energy both dropped after announcing acquisitions.

The stock market has climbed steadily in the last two months amid signs that the economy has recovered its momentum after being disrupted by an unusually harsh winter. Stronger growth should translate into higher corporate profits.

“The market has had a good run and it needs to pause,” said Peter Cardillo, chief market economist at Rockwell Global Capital.

FMC dropped $3.65, or 4.9 percent, to $71.10 after the company lowered its earnings forecast for the second-quarter, saying that the impact of the cold winter had been much stronger than it had originally anticipated.

Investors were also watching deal news that produced both winners and losers.

General Electric dropped 29 cents, or 1.1 percent, to $26.68 after agreeing to acquire most of the power generation business belonging to Alstom, a French company. Wisconsin Energy fell $1.62, or 3.5 percent, to $45.27 after the company said that it was buying Integrys Energy for $5.8 billion.

Micros Systems also gained on deal news. The software company’s stock rose $2.21, or 3.4 percent, to $67.98 after Oracle said it was buying the company for about $5.3 billion.

The stock market may be heading for a summer lull after its latest record-setting run, as investors wait for more confirmation that the economic outlook is improving, said Scott Wren, a senior equity strategist at Wells Fargo Advisors. The S&P 500 is up 6.2 percent for the year after trading mostly sideways for the first three months of the year.

“After the big run we’ve had over the past couple of months, a week or two of consolidation isn’t anything out of the ordinary,” said Wren.

In government bond trading, prices edged lower. The yield on the 10-year Treasury note, which moves in the opposite direction to its price, rose to 2.62 percent.

This article appeared in print on page 8 of the June 24th, 2014 edition of Hamodia.