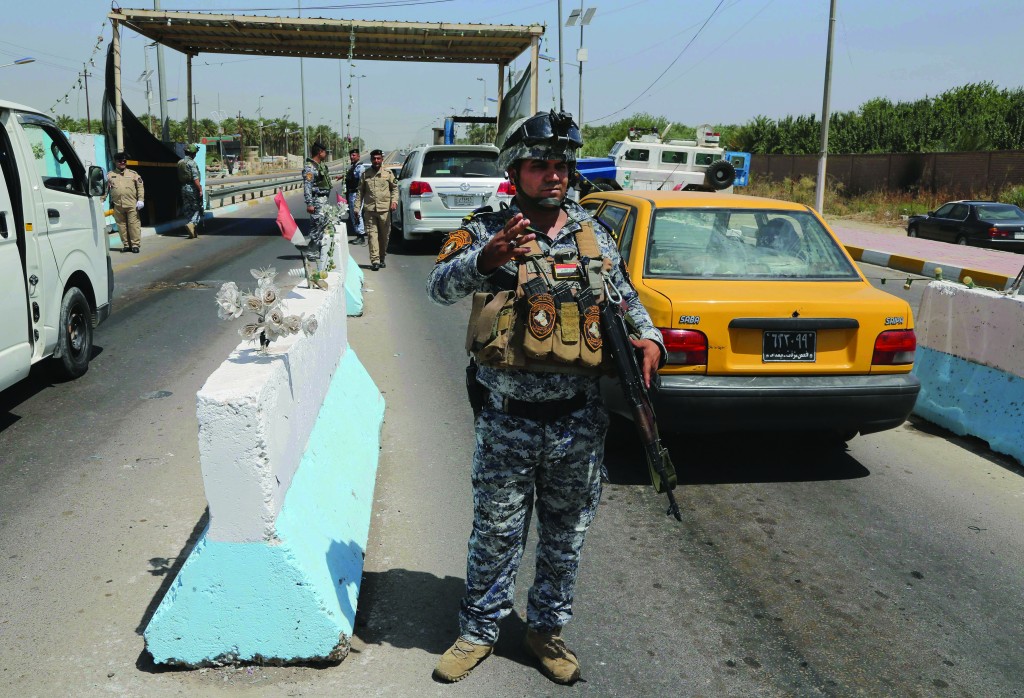 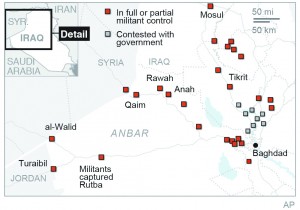 Sunni terrorists on Sunday captured two border crossings, one along the frontier with Jordan and the other with Syria, security and military officials said, as they pressed on with their offensive in one of Iraq’s most restive regions.

The fall dealt Iraq’s embattled Shiite prime minister a further blow and brought the war to the doorstep of Jordan, a key ally of the United States that also borders embattled Syria to its north.

The blitz by the Islamic State of Iraq and the Levant in Iraq’s vast western desert takes the al-Qaida-breakaway group closer to its dream of carving out a purist Islamic state straddling both Syria and Iraq.

Controlling the borders with Syria will also help it supply fellow
fighters in Syria with weaponry looted from Iraqi warehouses, significantly reinforcing its ability to battle beleaguered Syrian government forces.

If they succeed in their quest, they could further unsettle the already volatile Middle East and serve as a magnet for Jihadists from across the world — much like al-Qaida attracted terrorists in Taliban-ruled Afghanistan.

The Iraqi officials said the terrorists of the Islamic State took over the Turaibil crossing with Jordan and the al-Walid crossing with Syria after government forces there pulled out.

The officials spoke on condition of anonymity because they were not authorized to speak to the media.

The capture of the two crossings follows the fall on Friday and Saturday of the towns of Qaim, Rawah, Anah and Rutba They are all in the Sunni dominated Anbar province, where the terrorists have since January controlled the city of Fallujah and parts of the provincial capital Ramadi.

Rutba is on the main highway from Baghdad to the two border crossing and the capture has effectively cut the Iraqi capital’s main land route to Jordan. It is a key artery for passengers and goods and has been infrequently used in recent months because of deteriorating security.

Meanwhile, Iran’s supreme leader, Ayatollah Ali Khamenei, said he was opposed to any U.S. intervention in the Iraqi crisis, accusing Washington of fomenting the unrest. His comments appeared to quash recent speculation that the two rivals might cooperate in addressing the shared threat posed by the Islamic terrorists.

The two crossings and the four towns are the first seized in Anbar since the Islamic State and its allies overran the city of Fallujah and parts of Ramadi. Government troops have not been able to dislodge them after months of fighting.

The capture of Rawah on the Euphrates River and the nearby town of Anah appeared to be part of a march toward a key dam in the city of Haditha, the destruction of which would damage the country’s electrical grid and cause major flooding. The dam was built in 1986.

Iraqi military officials said more than 2,000 troops were quickly dispatched to the site of the Haditha dam to protect it. They spoke on condition of anonymity because they were not authorized to speak to the media.

Chief military spokesman, Lt. Gen. Qassim al-Moussawi, acknowledged the fall of the Anbar towns, saying government forces had made a tactical retreat and planned to retake them. He provided no further details. There has been no official comment on the capture of the al-Walid and Turaibil crossings.

The Islamic State and allied terrorists have carved out a large fiefdom along the Iraqi-Syrian border.

Iraq has requested U.S. airstrikes to help halt the advance, but President Barack Obama has yet to order any. He has instead called on Iraqi leaders to form a more representative government in thinly-veiled criticism of al-Maliki, and is deploying up to 300 military advisers to join some 275 troops in and around Iraq to provide security and support for the U.S. Embassy and other American interests.

In an interview with CBS aired Sunday, Obama warned that the al-Qaida-inspired terrorists in Iraq could grow in power and destabilize the region.

He said Washington must remain “vigilant” but would not “play whack-a-mole and send U.S. troops occupying various countries wherever these organizations pop up.”