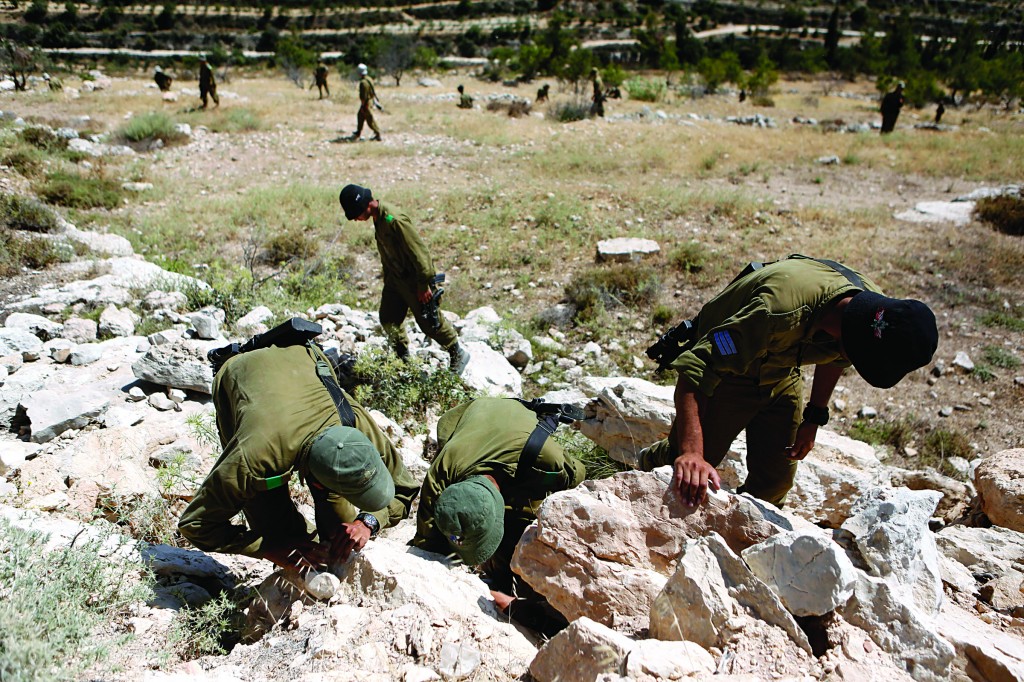 As the search for three kidnapped Israeli teenagers entered its second week, hundreds of additional IDF troops were dispatched to YehudahandShomron where raids, skirmishes and arrests continued over the weekend, but no breakthrough in locating the missing boys was reported.

Two Palestinians were reported killed. The IDF said that Ahmad Said Suod Khalid, 36, from the Al-Ein refugee camp in Shechem, was shot by soldiers after approaching them in a threatening manner and refusing to halt when warning shots were fired.

But the Israeli military rejected a claim by the Islamic Jihad terrorist group that one of its members was killed by army gunfire. An IDF spokesman said the victim was killed by Palestinian police.

Israeli Prime Minister Binyamin Netanyahu told the weekly cabinet meeting on Sunday that while the IDF has no intention of harming innocent civilians, in the process of self-defense there are sometimes victims.

Netanyahu reiterated that the IDF was focused on bringing safely home Eyal Yifrach, Gilad  Shaar and Naftali Frankel, as well as apprehending their kidnappers and “harming the organization to which they belong.”

Netanyahu also said that he plans to back up his allegations with evidence that Hamas is responsible.

“We are passing that evidence and information along to certain states, and soon it will be made public,” he said.

The ongoing pressure from the Israeli army has provoked renewed complaints and threats from the Palestinians.

Saying that Israel was “bringing the situation toward an explosion,” the Palestinian Authority said it was turning to the U.N. Security Council to try to end the offensive.

Abbas has condemned the abduction of the three Israelis, and his security forces have been helping in the search, but he has also criticized the Israeli sweeps as collective punishment.

The Palestinian leader finds himself caught between angry Hamas members and an impatient Israel.

PA security cooperation with Israel touched off a rare protest against Palestinian police in Ramallah on Sunday.

In an interview with Haaretz, Abbas said he had no credible information that Hamas was behind the kidnappings.

“I do not intend to punish anyone based on suspicions or because Netanyahu claims something. When Netanyahu has such information, he needs to update me and we will take care of the matter according to our own laws,” he said.

While Netanyahu has said he is unimpressed by Abbas’s words and will judge him by his actions in helping find the three teenagers and breaking with Hamas, Abbas got a vote of confidence from an opposition member on Sunday.

Meretz leader MK Zehava Gal-On reported that she spoke with Abbas by phone on Sunday, and that he affirmed his committment to assist Israel in rescuing the kidnapped boys.

He also denied that the PA had anything to do with the boys’ kidnapping.

In a statement following the conversation, Gal-On said “I call on Netanyahu to refrain from actions that aren’t directly related to the kidnappings.”

Hundreds of Israeli soldiers were deployed around the city of Chevron after the army declared the area a closed military zone.

The troops are walking over “very difficult, hilly terrain. They aren’t stopping for a moment,” according to one source.

There were violent incidents over the weekend in Dura, near Chevron, as well as rioting in Beitunya and Jenin.

The IDF said in response, “During operational activities, launched as part of the operation to retrieve the abducted teenagers, a military force encountered a violent disturbance in the Palestinian village of Dura. Attackers hurled rocks, firebombs, and burning tires at soldiers, who acted to disperse the riot.”

“We’ve begun extracting a heavy price from Hamas in Yehudah and Shomron,” Defense Minister Moshe Yaalon said. The price is “much more painful than air strikes. We are severely harming Hamas’s civilian infrastructure, and this is a very heavy price for the organization. It’s funds, charity institutions, and civilian and terrorist infrastructure.

“There’s a reason we’re hearing their cries and threats. We won’t stop this activity against Hamas’s infrastructure, until we feel it is exhausted. We have no intention to ignite the territory, and we’re acting responsibly, with sound judgment. The ring around the kidnappers has to continue to get tighter.”

The IDF has so far searched some 1,350 sites in the region and detained more than 330 Palestinians, many of them Hamas members, for questioning.

In a related item, an IDF drone fell from the skies over Chevron and crashed onto a private rooftop. Local residents handed the damaged craft over to the Palestinian Authority’s security forces, which gave it to the IDF.