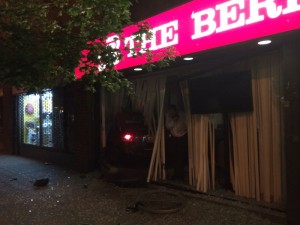 It had all the makings of a full-scale tragedy — a car driven at high speed by a teenage driver slams into an ambulance, then into a bank and through to the next-door stationery store, all in the very center of Boro Park’s 13th Ave.

But it happened at about 2 o’clock in the morning, on Friday, and, b’chasdei Hashem, no one was seriously hurt; the driver was taken to Maimonides Medical Center for observation but was not seriously injured.

Menachem Klein, manager of Montgomery Stationery at 5014 13th Ave., was at his home in Bensonhurst when he was
awakened by a call at about 3:00 a.m. He rushed to the scene to find that “the whole store was a total mess — everything was strewn all over. But thank G-d everyone is safe.”

The store was boarded up overnight. Mr. Klein said on Sunday that he didn’t know how long it would be before the store could open again.

An ambulance coordinator who was at the scene told Hamodia that the ambulance was going at a “a normal rate of speed” returning from a call when the car went through a red light and smashed into it before ramming into the Berkshire Bank and then through the shared wall into Montgomery Stationery.

Mordechai, who asked to be identified only by his first name, lives a few blocks away on 14th Ave. He was returning home from Williamsburg at the time, and came upon the site about 10 minutes after the crash.

“I saw the car essentially inside the bank,” he said “It was a shocking scene. It looked much scarier than what the actual results were. If it had been during the day, dozens of pedestrians and many other cars could have been involved.”

No one at Berkshire could be reached for comment.

This article appeared in print on page 1 of the June 23rd, 2014 edition of Hamodia.