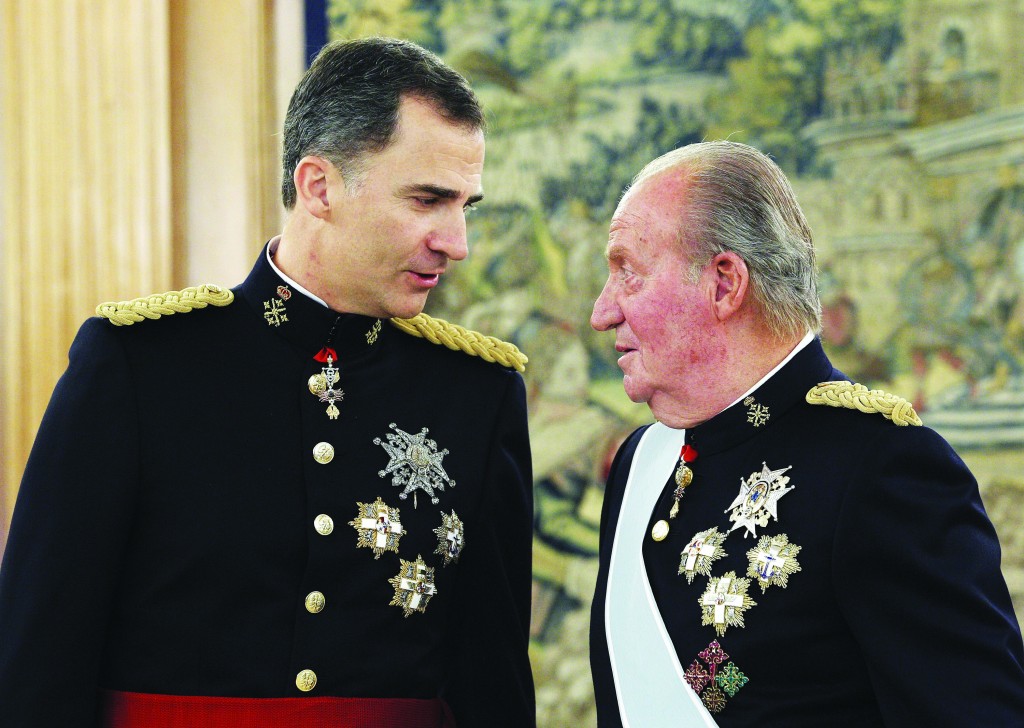 Taking the Spanish throne on Thursday, King Felipe VI sought to inspire his beleaguered countrymen amid troubled economic times and lift patriotic spirits. “We are a great nation. Let us believe and trust in ourselves,” Felipe said at his swearing-in ceremony.

Felipe, 46, became monarch after his father Juan Carlos announced his surprise decision to abdicate. The 76-year-old said he was stepping aside after a four-decade reign so younger royal blood could energize the country.

Felipe, and Spain, face many problems. The country is struggling to shrug off a double-dip recession and drive down a 26 percent jobless rate. Scandals have tarnished the royal family and fueled campaigns to abolish the monarchy, while influential groups in some Spanish regions continue to push for independence.

Appearing self-assured in a military dress uniform, Felipe sought to draw a line under Spain’s recent past, promising “a reinvigorated monarchy for new times.”

Saying he felt the suffering of those whose living standards were hurt by the economic crisis, Felipe urged Spaniards to shun resignation and unleash their ambitions. He said finding jobs for the unemployed was “a priority for society and the government.”

Thousands of people lined the streets of Madrid streets as Felipe and Queen Letizia drove from parliament to the royal palace in an open-topped Rolls-Royce, waving to the crowds. The royal couple’s daughters, Princesses Leonor, 8, and Sofia, 7, accompanied them for most of the day.

Authorities prohibited a demonstration by groups seeking to abolish the monarchy.

Felipe’s inaugural speech came at a ceremony in the country’s parliament, where the 18th-century Spanish crown and 17th-century scepter were on display. Later, a reception for 2,000 guests at the royal place featured finger foods instead of an elaborate banquet, a deliberately modest touch that acknowledged the financial hardships being endured by many Spaniards.