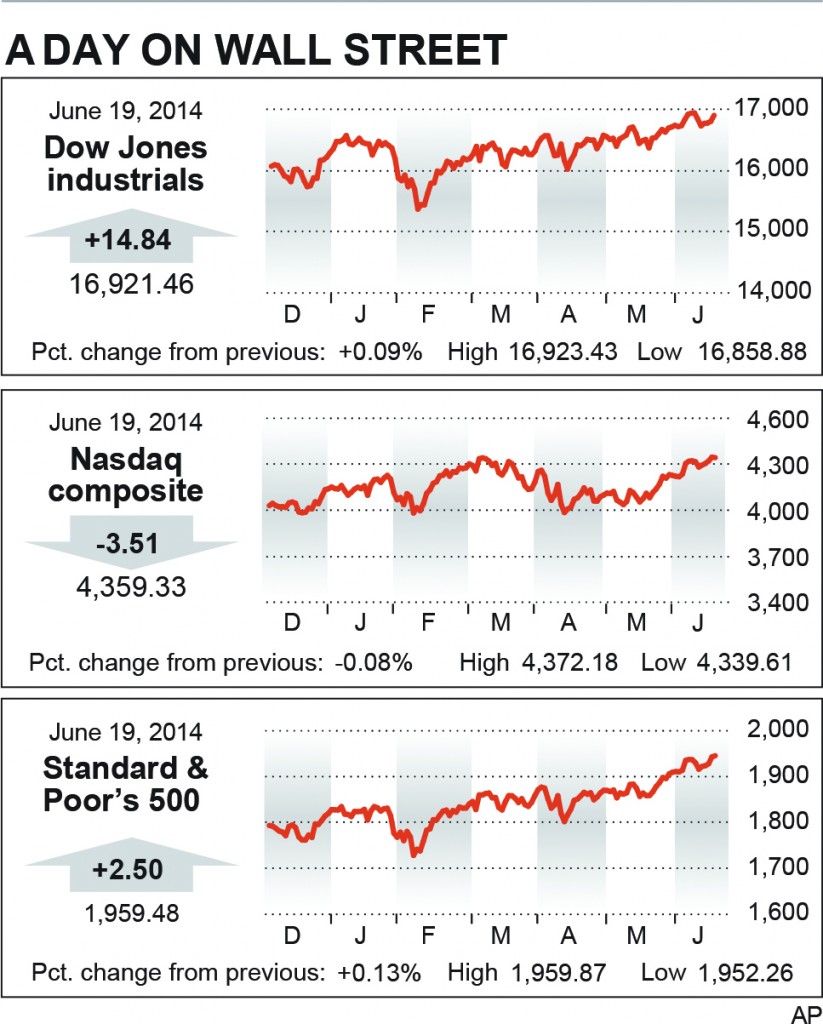 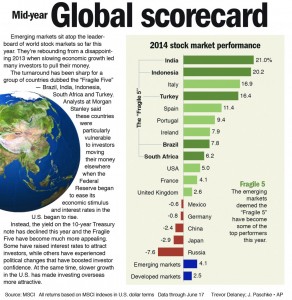 The Standard & Poor’s 500 index closed at an all-time high for the second time in two days and notched its fifth gain in five days.

The Dow Jones industrial average and Nasdaq composite ended mixed after drifting between small gains and losses for much of the day.

The three key stock indexes all opened higher, holding on to tiny gains in premarket trading as investors sized up the latest data on unemployment aid applications and an index of economic indicators.

The Labor Department reported that applications for unemployment benefits fell last week to 312,000, the lowest in more than six years. The Conference Board added to the good news, saying its index of leading indicators rose 0.5 percent in May from the previous month.

The market began to drift lower, however, as investors looked beyond the economic data and focused instead on a mixed bag of corporate earnings from companies such as Kroger, Rite Aid and Pier 1 Imports.

By midday, stocks veered into the red, where they remained until halfway through the final hour of trading, when a late push elevated the S&P 500 and Dow barely higher on the day.

The three indexes are all up for the year.

The string of record highs has the S&P 500 index running ahead of its 50-day moving average. That suggests it could be in for a pullback, said Jim Russell, senior equity strategist at U.S. Bank Wealth Management. Russell still expects the market to move higher in coming months.

“We think the environment is still favorable for equities to have an upward bias,” Russell said. “It’s still too early to put the bear suit on.”

Despite its upward bent, the market has been mostly registering small moves, reflecting a cautious mood on the part of many investors heading into summer, as well as lingering concern over the possible fallout from the crisis in Iraq and questions over the resiliency of the U.S. economy.

The U.S. economy shrank at an annual rate of 1 percent in the January-March quarter, the victim of a severe winter which slowed business activity in a number of areas. Many analysts anticipate growth rebounded strongly in the April-June quarter.

“We know the economy is showing signs of improvement, and we’ve seen that trajectory over the past two or three months,” said Russell. “To move the equity market to a higher level we need to see anecdotal evidence that company earnings are starting to increase.”

The market will get a sense of that next month, when the next round of corporate earnings begins. Until then, the next key market mover will likely be the June jobs report, due out the first week of July.

On Thursday, investors waded through a mixed bag of corporate news.

Kroger rose $2.39, or 5.1 percent, to $49.66 after the supermarket operator raised its earnings forecast for the year. American Apparel jumped 6.7 percent after the company’s board said it would fire the CEO. The stock rose 4 cents to close at 68 cents.

Other companies didn’t fare as well.

Rite Aid reported its fiscal first-quarter earnings sank 55 percent due to higher-than-expected drug costs and other expenses. The stock fell 26 cents, or 3.5 percent, to $7.18.

Investors also hammered the stock of luxury goods maker Coach after the company said it will shutter about 70 underperforming stores in a bid to regain ground lost to competitors. The stock fell $3.50, or 8.9 percent, to $35.69.

All told, six of the 10 sectors in the S&P 500 index rose, led by utilities. The sector is up 15.1 percent this year as investors have piled into stocks that pay high dividends. Technology stocks fell the most.

Bond prices fell, sending the yield on the 10-year Treasury note up to 2.63 percent from 2.59 percent late Wednesday.