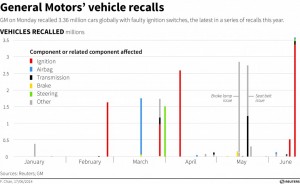 Lawmakers on Wednesday expressed skepticism over General Motors’ claims that its failure to quickly recall cars with an ignition switch issue linked to more than 50 crashes and at least 13 deaths was a result of mere incompetence.

During a hearing of a House Energy and Commerce Committee subcommittee Wednesday, the lawmakers said they found GM’s internal report on the recall delay deeply troubling and that it failed to answer all their questions about why the company didn’t act for years to fix the ignition switch problem in the Chevrolet Cobalt and other small cars.

“The report singles out many individuals at GM who made poor decisions or failed to act, but it doesn’t identify one individual in a position of high leadership who was responsible for these systemic failures,” Rep. Diana DeGette, D-Colo., told GM Chief Executive Mary Barra. “The report absolves previous CEOs, the legal department, Ms. Barra and the GM board from knowing about the tragedy beforehand. But that is nothing to be proud of.”

Rep. Tim Murphy, R-Pa., chairman of the subcommittee, asked whether GM employees tried to hide information about the ignition switch.

Added Rep. Phil Gingrey, R-Ga., “That smacks of a big cover-up to me.”

In their testimony, both Barra and former U.S. Attorney Anton Valukas, the author of GM’s internal report, said they had no evidence of employees attempting to cover up the ignition switch issue.

“What we looked for was any evidence that an individual knew that they had a safety issue and took steps to conceal that,” Valukas said. Nonetheless, he added, “The story of the Cobalt is a story of individual and organizational failures that led to devastating consequences.”

In her testimony, Barra conceded that GM failed to handle the issue “in a responsible way” and that GM was now engaged in the “most exhaustive, comprehensive safety review” in its history.

“This isn’t just another business challenge. This is a tragic problem that never should have happened. And it must never happen again,” Barra said.

This article appeared in print on page 3 of the June 19th, 2014 edition of Hamodia.