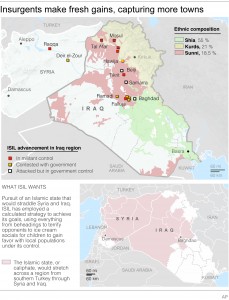 Iraq has asked the United States for air support in countering Sunni rebels, the top U.S. general said on Wednesday, after the insurgents seized major cities in a lightning advance that has routed the Shi’ite-led government’s army.

However, General Martin Dempsey, the chairman of the U.S. military’s Joint Chiefs of Staff, gave no direct reply when asked at a Congressional hearing whether Washington would agree to the request.

Baghdad said it wanted U.S. air strikes as the insurgents, led by fighters from the Islamic State of Iraq and the Levant (ISIL), battled their way into the biggest oil refinery in Iraq and the president of neighbouring Iran raised the prospect of intervening in a sectarian war that threatens to sweep across Middle East frontiers.

“We have a request from the Iraqi government for air power,” Dempsey told a Senate hearing in Washington. Asked whether the United States should honor that request, he said: “It is in our national security interest to counter ISIL wherever we find them.”

In the Saudi city of Jeddah, Iraqi Foreign Minister Hoshyar Zebari said Baghdad had asked for air strikes “to break the morale” of ISIL.

However, any air targets would be hard to identify because the militants did not have traditional supply lines or major infrastructure and mingled with civilians.

Sunni fighters were in control of three quarters of the territory of the Baiji refinery north of Baghdad, an official said there, after a morning of heavy fighting at gates defended by elite troops who have been under siege for a week.

ISIL aims to build a Sunni caliphate ruled on mediaeval precepts, but the rebels also include a broad spectrum of more moderate Sunnis furious at what they see as oppression by Baghdad.

Washington and other Western capitals are trying to save Iraq as a united country by leaning hard on Shi’ite Prime Minister Nuri al-Maliki to reach out to Sunnis. Maliki met Sunni and Kurdish political opponents overnight, concluding with a frosty, carefully staged joint appearance at which an appeal for national unity was read out.

So far Maliki’s government has relied almost entirely on his fellow Shi’ites for support, with officials denouncing Sunni political leaders as traitors. Shi’ite militia — many believed to be funded and backed by Iran — have mobilized to halt the Sunni advance, as Baghdad’s million-strong army, built by the United States at a cost of $25 billion, crumbles.

Like the civil war in Syria next door, the new fighting threatens to draw in regional neighbors, mustering along sectarian lines in what fighters on both sides depict as an existential struggle for survival based on a religious rift dating to the 7th century.

Iranian President Hassan Rouhani made the clearest declaration yet that the Middle East’s main Shi’ite power was prepared to intervene to protect Iraq’s great shrines of Shi’ite imams, visited by millions of pilgrims each year.

This article appeared in print on page 1 of the June 19th, 2014 edition of Hamodia.