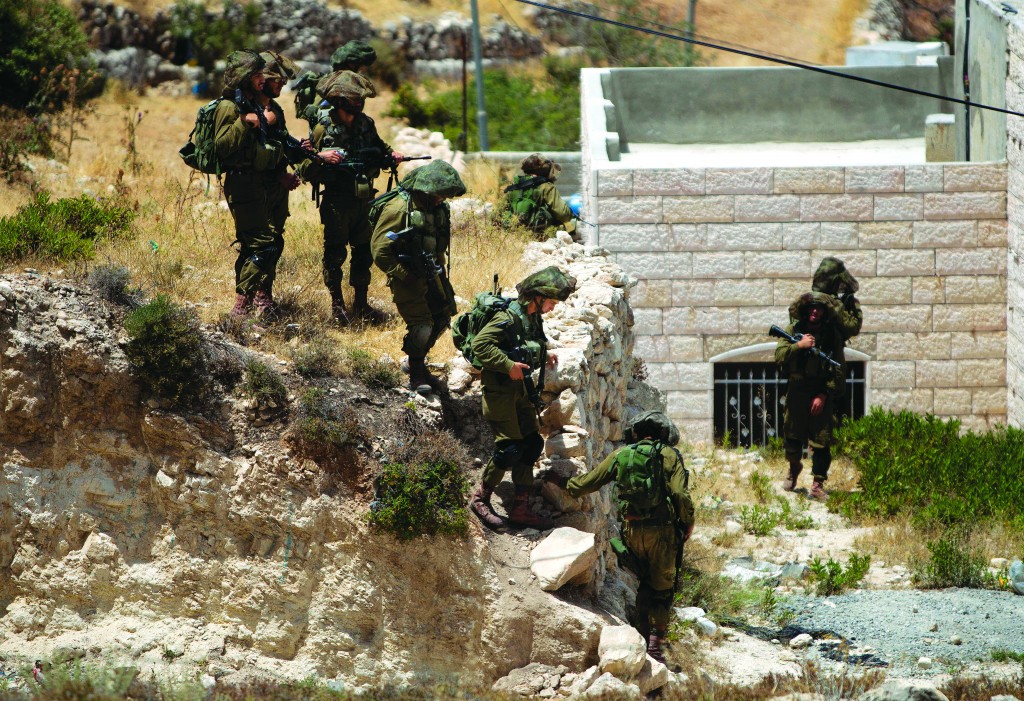 Israel’s security cabinet decided on Tuesday to widen a crackdown on Hamas in Yehudah and Shomron after troops detained more than 40 members of the terrorist organization in sweeps conducted in tandem with a search for the three
kidnapped teenagers missing since Thursday night.

The Israeli army has launched house-to-house searches, round-ups of suspects and interrogations in Chevron, a Hamas stronghold, and then in other parts of Yehudah and Shomron, in a mobilization on a scale not seen in years.

On the fifth day of Operation Brothers’ Keeper, a thousand soldiers carried out raids in Shechem. A total of about 200 suspects have been arrested since the start of the operation.

Israel officials acknowledged the operation was two-fold — recovering the missing teenagers and dealing a serious blow to Hamas.

Israel has said it does not yet know the whereabouts of Gilad Shaar and U.S.-Israeli national Naftali Frankel, both aged 16, and Eyal Yifrach, 19, or what their captors’ demands might be.

At its meeting on Tuesday, Netanyahu’s security cabinet agreed to make more arrests, put up roadblocks and turn Palestinian houses into military observation posts to increase pressure on Hamas, a political source said.

“As long as our boys remain abducted, Hamas will feel pursued, paralyzed and threatened. We are committed to resolving the kidnapping and debilitating Hamas terrorist capacities, its infrastructure and its recruiting institutions,” said Lieutenant-Colonel Peter Lerner, an Israeli military spokesman.

Israel showed photographs of what it said were hundreds of weapons, including guns, seized at some of the detainees’ homes.

Israeli and Palestinian security sources said soldiers and police had wounded five Palestinians in Jenin and in confrontations near the cities of Ramallah and Nablus.

In the Gaza Strip, Israel’s air force bombed four terror targets early on Tuesday in response to rocket fire at southern Israel. There were no reported casualties.

Giora Eiland, a retired Israeli general and former national security adviser, said the abductions provided an opportunity to target Hamas in operations that could undermine the new Palestinian unity government.

“The fragile links between the (Abbas-led Palestinian) Authority and Hamas could become more of a crack,” Eiland told Israel Radio, a day after the latter condemned as a “knife in the back” PA efforts to help the Israelis locate the teenagers.

As part of the campaign of punitive action against Hamas, Israel said on Tuesday it will harshen the conditions for Hamas prisoners, following a security cabinet meeting.

Yisrael Hayom noted that, “In tandem with the activity against Hamas, Israel is working to tighten links with Fatah. Those who have spoken with senior Palestinian Authority figures in recent days cannot help but hear anger at the abduction and, at the same time, satisfaction over Israel’s operations against Hamas.”