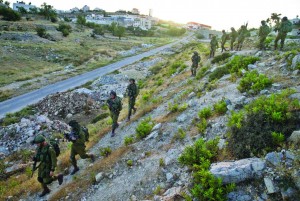 Netanyahu has said that he holds Abbas responsible for the fate of the teens and claimed the Fatah-Hamas unity government created the atmosphere for the kidnappings.

“This incident exposes the true face of the terrorism that we are fighting against. Terrorists abduct innocent Israeli children while we save the lives of ill Palestinian children in our hospitals. This is the difference between our humanitarian policy and the murderous terrorism that is attacking us.”

Netanyahu added, “The consequences of the partnership with Hamas must be understood; it is bad for Israel, bad for the Palestinians and bad for the region,” he said, according to a transcript released by the prime minister’s office.

Abbas had remained silent on the abduction since Thursday night, but issued a statement Monday:

“The Palestinian leadership condemns the series of events over the last week, beginning with the kidnapping of the three Israeli teens and ending with a series of Israeli violations,” the statement said, referring to the arrests and the killing of a 20-year-old Palestinian by Israeli army fire early Monday during a confrontation between stone-throwers and soldiers.

The PA denies any responsibility for the terrorist activity of Hamas and similar groups in its terroritory, and has been accusing Israel of escalating the situation.

Senior Israeli officials are calling for a crackdown on Hamas and perhaps even the Western-backed Palestinian Authority led by Abbas, The Associated Press said on Monday.

Senior Israeli Cabinet ministers met for an extended period of time on Monday.

“We are in the midst of a complicated operation, and we have to be prepared that it might take some time,” Prime Minister Netanyahu said. “We are working in a deliberate, responsible and determined fashion. Right now, we are focusing on one goal: bringing our boys home.”

“In recent days we have also seen efforts to open a new front from the Gaza Strip. We have responded to the rocket fire very strongly. If necessary, we will respond even more forcefully. I promise that whoever tries to harm Israeli citizens will be harmed,” the prime minister warned.

“I would like to address the wonderful families of Gilad, Naftali and Eyal. I spoke to people who visited them, and I was very impressed by the conversations, by your strength in these extremely difficult moments. I and all of Israel’s citizens support you, and we are making every effort to bring the boys home.”

The government is reportedly weighing a series of measures, including the deportation of Hamas leaders from Yehudah and Shomron to Gaza, where Hamas remains the ruling power, despite the unity deal.

Israeli forces have arrested more than 150 Palestinians, most of them from Hamas, over the past four days. Among those detained were 10 Hamas politicians. The most senior among those detained Monday was Parliament Speaker Abdel Aziz Dweik.

On Monday evening, Netanyahu and Defense Minister Moshe Yaalon said in a special address to the nation that Israel is doing everything possible to return the three captive teens.

But he cautioned that “we must be prepared that this will take time” and had no new information to convey.

He said that in a phone call Monday with United States Secretary of State John Kerry, he thanked him for his condemnation of the kidnapping and urged other international leaders to follow suit.

This article appeared in print on page 1 of the June 17th, 2014 edition of Hamodia.