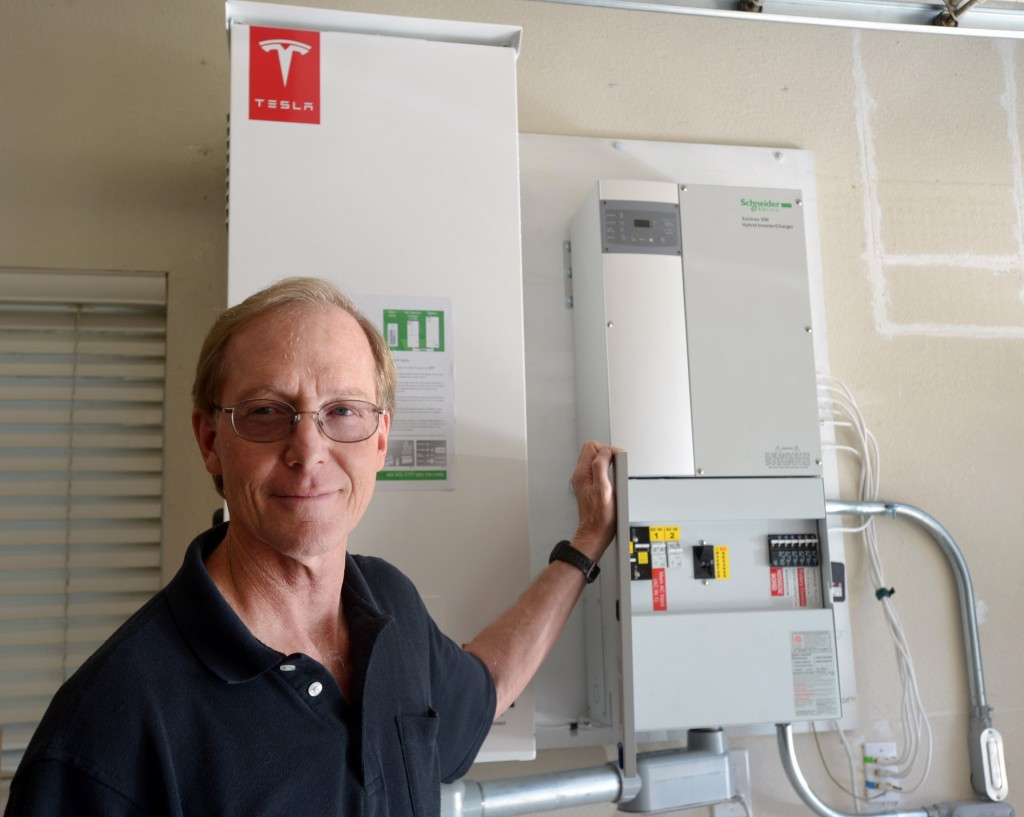 First, Randy Ross bought a Chevrolet Volt. Faced with the need to charge his car and eager to cut his utility bill, he installed solar panels on the roof of his Pleasanton, Calif., home.

Now Ross, 61, has taken the next big step toward energy independence: his own battery storage system, which gives him a source of backup power and could ultimately let him tap solar electricity whenever he needs it, not just when the sun is shining.

Battery-based energy storage – for homes, businesses and the electric grid – is a hot new industry in Silicon Valley, driven by advances in battery chemistry and state policies designed to support the emerging technology.

“It’s pretty amazing how much growth there will be in energy storage,” JB Straubel, chief technology officer for Tesla Motors Inc., said at a recent industry event. “We have to get to a 100 percent renewable grid, and storage becomes an absolute imperative to get there.”

Ross’s lithium-ion battery storage system, contained in a 4-foot-tall metal box mounted on the wall of his garage, is made by Tesla but offered by San Mateo, Calif.-based SolarCity to its California solar customers as part of a small pilot project. SolarCity is currently offering what it calls the Home Energy Storage system for $1,500 down and $15 a month over a 10-year lease period.

For now, Ross’s battery system, which can draw power from either his solar panels or the electric grid, simply provides backup power. But in the future, residential storage is expected to include a variety of features, such as cellphone apps to remotely control when energy is released from the battery.

“The Volt is like a gateway drug to getting solar panels,” said Ross, an electrical engineer. “Then, if you get the energy-storage system, you can turn the solar power into a battery that provides power even if PG&E goes down. When the next earthquake comes along, the battery can keep my refrigerator and (other electronics) running. This is a no-brainer.”

California sees energy storage as one tool to better manage the electric grid, integrate a growing amount of solar and wind and reduce greenhouse-gas emissions.

“Say you want a pizza,” said Katherine Hamilton, policy director of the Energy Storage Association, the industry’s leading trade group. “You can make a pizza from scratch. You can order one on the phone to be delivered. Or you can pull a frozen pizza out of the freezer. Energy storage is kind of like pizza from the freezer. It’s there when you want it, and you don’t have to wait for it.”

Palo Alto, Calif.-based Tesla, best known for its all-electric Model S sedan, aims to be in the front ranks of the emerging energy-storage market. Besides offering the residential energy-storage units to customers through SolarCity, where Tesla CEO Elon Musk serves as chairman, Tesla is making much larger-scale energy-storage systems for commercial businesses at its Fremont factory and has installed an energy-storage unit at its Tejon Ranch Supercharger station off I-5 in Southern California.

“Tesla is driving as fast as we can into this space,” Straubel said during a keynote address at the recent Energy Storage Symposium sponsored by Joint Venture Silicon Valley. “I see us more as an energy-innovation company at our core than even a car company.”

Straubel, who also serves on the board of SolarCity, said lithium-ion battery technology, which powers Tesla’s cars, has revolutionized both the electric-vehicle and energy-storage markets.

Tesla is ramping up manufacturing to reach the full capacity of its Fremont, Calif., factory, with the goal of making a half-million cars a year by 2020. To drive down the cost of batteries, it plans to break ground this month on a massive “gigafactory” for battery production that is expected to produce more batteries than currently are being made globally. The batteries are not just for Tesla’s cars, but also for Tesla’s product line for stationary storage.

Tesla is far from alone in pursuing the new energy-storage market. San Jose, Calif.-based SunPower, Silicon Valley’s dominant solar manufacturer, is repositioning itself as a full-service energy-service provider and plans to add battery-based storage systems to its solar projects.

A host of venture-backed storage startups, in Silicon Valley and elsewhere, are also in the race. Primus Power, based in Hayward, Calif., has systems in the field, including at the Marine Corps Air Station in Miramar. Sunnyvale, Calif.-based EnerVault, which received research and development grants from both the California Energy Commission and the U.S. Department of Energy, recently dedicated its long-duration battery storage at an almond orchard in Turlock, Calif. The battery can be charged from the orchard’s solar system and then be used to provide power to pump ground water for irrigation.

Ross got his unit installed in his garage in October, but it wasn’t until May – after numerous visits to his home by representatives from SolarCity, Tesla and PG&E – that the system was connected to the grid after an application fee of $800. After numerous complaints about cost and wait times, state regulators moved last month to exempt small energy-storage systems from fees and lengthy reviews, and Ross should recoup his $800.

Though Ross’s storage system functions only as a backup for key circuits in his house – such as the internet and the refrigerator – as the technology develops, there will be myriad other applications.

“It’s a great package, and one that is going to be of interest to a lot of people,” Ross said.