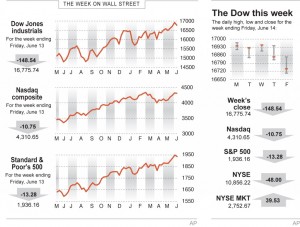 A flurry of corporate deals and a positive outlook for the technology industry gave the stock market a lift Friday.

Intel jumped after the company said sales of business computers have been stronger than expected, and raised its revenue forecast. Technology stocks rose on the news, which was also a positive sign for investors who are betting that higher investment from businesses will help drive the economy this year.

Still, major indexes had their first weekly losses in a month. A combination of so-so economic news and concerns about the impact of higher oil prices weighed on stocks earlier in the week.

“The economy is still on a decent trend, but it’s choppy and I think we can expect the same for the market,” said Jerry Braakman, chief investment officer at First American Trust.

Intel was one of the top gainers in the S&P 500 after the company raised its revenue forecast late Thursday and said it expects profit margins to increase. The stock jumped $1.91, or 6.8 percent, to $29.87.

International Game Technology was the biggest gainer in the S&P 500. It jumped $1.51, or 10.5 percent, to $15.86 after Reuters reported that a number of companies considered bidding for it.

OpenTable, an online restaurant booking service, surged $34.05, or 48.3 percent, to $104.48 after the company agreed to be acquired by Priceline for $2.6 billion. The deal will help Priceline, an online travel company, branch out into a new business. Priceline’s international reach will help OpenTable expand overseas.

The deal sparked speculation that other technology companies could be acquired. Yelp’s stock surged $9.08, or nearly 14 percent, to close at $74.92.

Clothes retailer Express jumped $2.90, or 21 percent, to $16.45 after it said it had been approached about a takeover by Sycamore Partners, a New York-based private equity company. Sycamore already owns 9.9 percent of Express’ stock.

“It seems like you have a deal almost every day,” said John Fox, director of research at Fenimore Asset Management.

While the number of acquisitions completed this year is roughly the same as it was at this point last year, the value has surged. U.S. companies have closed deals worth $714 billion, up 47 percent from $485 billion over the same period last year, according to Dealogic.

The price of crude added modestly to gains from earlier in the week. Crude is rising because Iraq’s insurgency threatens to disrupt exports from OPEC’s No. 2 oil producer. On Friday, oil nudged up 38 cents, or 0.3 percent, to $106.81 a barrel after a jump of more than $2 the day before. For the week, oil has risen 4 percent.

If the turmoil in Iraq continues and oil prices climb high enough, U.S. growth in the second half of the year may fall short of current estimates, said David Lafferty, the chief market strategist for Natixis Global Asset Management.

In U.S. government bond trading, the yield on the 10-year note rose to 2.61 percent early Friday from 2.60 on Thursday. The yield on a bond rises when its price falls.

This article appeared in print on page 12 of the June 16th, 2014 edition of Hamodia.