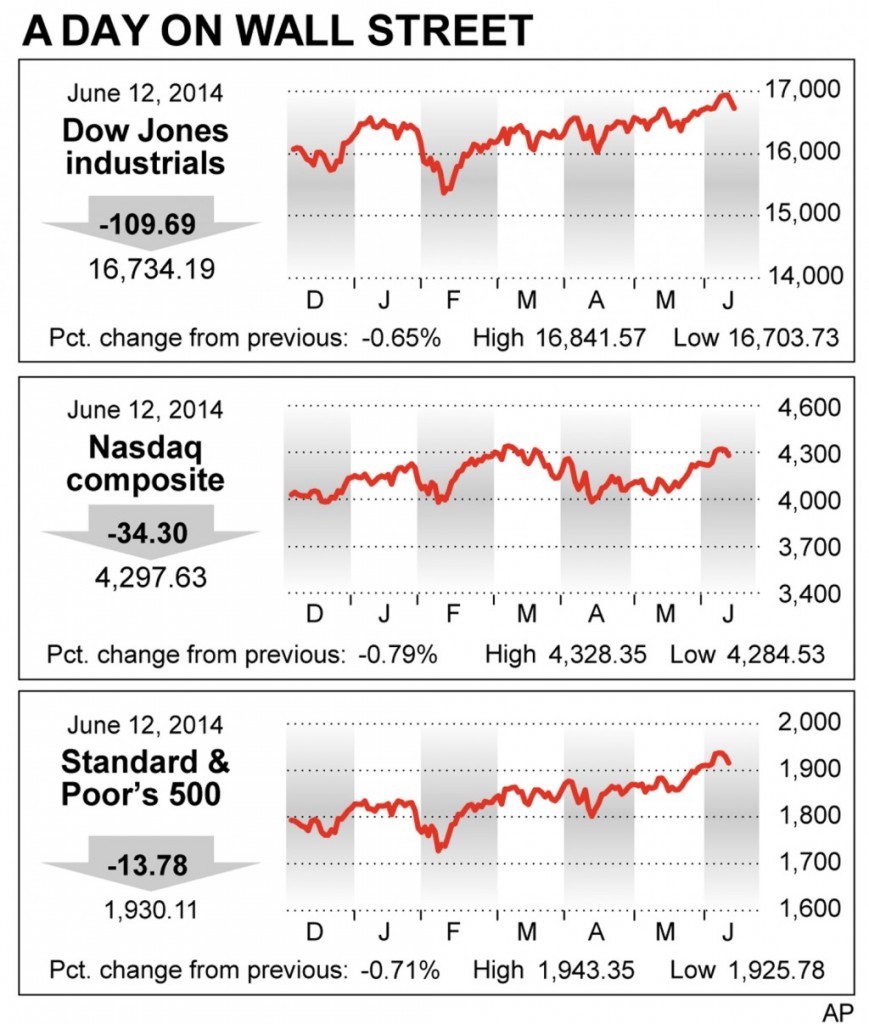 Stocks fell from the start of trading on a government report that retail sales for May came in slightly lower than expected. A separate report on jobs was weak, too. A surge in oil prices as violence flared in Iraq also weighed on the market, and hammered airline stocks.

For the Standard and Poor’s 500, it was the third down day in a row, a reversal of sorts from steady, if unremarkable, rises for much of the year. The index is heading for its first weekly loss in four weeks.

Uri Landesman, president of hedge fund Platinum Partners, said investors had gotten too complacent after a strong run in stocks, and the pullback wasn’t surprising.

“It’s time for profit taking, taking risk off the table,” he said. “It’s very rare that markets move up in a straight line.”

In the retail report, the Commerce Department said U.S. sales rose 0.3 percent last month, helped by a surge in auto demand. That was the fourth straight month of gains, but shy of the 0.4 percent increase that economists expected.

The Labor Department said that weekly applications for unemployment benefits rose 4,000 to a seasonally adjusted 317,000.

“The data today was a little unfulfilling,” said Lawrence Creatura, a portfolio manager at Federated Investors. Still, he is optimistic in the face of the selling because he believes the economy is generally strengthening. “We’re definitely not flinching. We’re holding our positions.”

Energy stocks rose broadly after insurgents captured two cities in Iraq, raising the specter of disrupted global oil supplies. The price of oil rose $2.13, or 2 percent, to $106.53. Diamond Offshore Drilling climbed $1.89, or 4 percent, to $48.77, making it the second-biggest gainer in the S&P 500.

Among the 10 sectors in the S&P 500, only energy and utility companies were up for day.

A combination of higher oil prices and a warning by Lufthansa of smaller profits due to weaker passenger demand helped drive down airline stocks. Delta Air Lines fell $2.21, or 5 percent, to $38.50, the most in the S&P 500 index. United Continental dropped $2.66, or 6 percent, to $42.60.

— Restoration Hardware jumped $9.05, or 13 percent, to $80.40 after the furniture and housewares company reported stronger-than-expected results in its fiscal first quarter and raised its outlook for the year, topping Wall Street’s prediction.

— Twitter rose $1.25, or 3.5 percent, to $36.79 after news that its chief operating officer, Ali Rowghani, had resigned. Rowghani was in charge of expanding Twitter’s user base, but this didn’t happen as quickly as investors had hoped.

In government bond trading, the yield on the 10-year Treasury note, which moves in the opposite direction to its price, slipped to 2.60 percent from 2.64 percent on Wednesday.