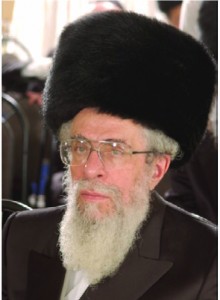 A large crowd accompanied Reb Naftali Rozmarin, z”l, one of the elder Gerrer chassidim, who passed away on Wednesday morning at the age of 79.

Reb Naftali was born on
8 Elul 5694/1934 in Krasneschiltz, Poland, to his father Reb Avraham Leib Rozmarin, z”l. He grew up in the town until World War II broke out.

With the outbreak of the war, he fled, together with his mother, his brother, ybl”c, Harav Yitzchak (Itche) Rozmarin (later a Ra”m in Yeshivah Sfas Emes in Yerushalayim) and his sisters to Warsaw, where they experienced the terrible bombardment of 1939. Later, they fled to Makava, and when they saw the brutal killing of the Nazis, they decided to flee to Russia. Reb Naftali and his father reached the city of Rotka, having been preceded by his brother, Reb Itche. They were then joined by their grandfather, Reb Baruch Shraga, zt”l, and his wife, and the brother of Reb Avraham Leib, Reb Yechezkel (Chatzkel), z”l.

In time, his mother sent a letter to his father saying that the situation in Poland had calmed down somewhat and they could return, which is what they intended to do. But hashgachah pratis wanted them to survive, and in the middle of the night, officials burst into their house and deported them to far off Siberia. They spent several extremely difficult years there.

For years, Reb Naftali and his brother Reb Itche would describe their experiences in Siberia, and the mesirus nefesh that was required to keep even the basic tenets of Yiddishkeit. Their grandfather Reb Baruch Shraga passed away from hunger, followed shortly after by their grandmother. Their uncle who was with them also passed away. Reb Chatzkel spent months in a hospital, on the verge of death. They would also describe how they ate only potatoes for months on end and almost died of hunger. Once, the gentile neighbor called them over; he had mercy on them and had prepared them a delectable meat meal, but they firmly refused and replied that they were not allowed to eat it because it was not kosher. The gentile said, “We never thought there could be such a thing that children of this age, who are starving for bread, would refrain from eating for such strange reason.” Reb Naftali would also relate nostalgically how “we stood on the table so that we shouldn’t get bitten by huge rats, and we danced enthusiastically, ‘Zohl shoin zein di geulah!’”

In 5706/1946, they returned to Poland, and when they saw the destruction, and heard that their entire family had perished, they traveled to Saint Germain, France, where they remained with their father until 5709/1949. At that time, the Lev Simchah of Ger came to the city and told their father, Reb Avraham Leib: “Send them to learn in Yeshivah Sfas Emes and I will take care of them.” Indeed, he sent a letter to the yeshivah to accept them, and in 1949, the two brothers began to learn in Sfas Emes, where Reb Naftali learned until 1955. Wanting to be close to his father, who had, in the interim, immigrated to Cleveland, Ohio, he applied to the yeshivah there. Ultimately, he traveled to New York, where he began learning in Yeshivas Tomchei Temimim of Lubavitch. From there, he went to learn in Bais Medrash Elyon, in Spring Valley, where he made great strides in his learning. He kept the letters that he wrote to his uncle Reb Yechezkel, z”l, in Eretz Yisrael describing the “darchei halimud” and the “hespekim” and so forth. He learned in Bais Medrash Elyon until 1958.

On Lag B’Omer 1958 he married his wife, tbl”c, Esther, the daughter of Harav Yehonosan Silberberg, z”l, who was a Rav in Cleveland, and later in Bais Medrash Ohel Yehonasan. They moved to New York, where Reb Naftali was hired as a melamed in Talmud Torah Chasan Sofer. Thus began his tenure as a dedicated and beloved mechanech. For almost fifty years, he invested his heart and soul in the chinuch of his talmidim, imbuing them with ahavas Torah and yiras Shamayim. Hundreds of his talmidim have wonderful memories of their time under his tutelage, pointing out his individual attention to them all. He always had just the right word to say to each person.

The world is supported by three pillars: Torah, avodah and gemilus chassadim.

His ahavas Torah and mesirus nefesh were among his most prominent traits. He used to relate that as a child, he went to cheder at the age of three, even though he was really too young to go. He wanted to be close to people learning Torah, and he stood in the courtyard of the cheder. Once, a Polish gentile threw a stone that hit him in the head. He was taken to the hospital in Warsaw. Reb Naftali would point to the scar on his head and say, “Torah is only acquired with simanim.”

He would learn constantly, and would go to regular shiurim both while living in America and after he came to Eretz Yisrael. No one ever found him sitting idly; he was always with an open sefer, whether he was learning Chumash, Shas, or sifrei Chassidus. Whenever the children or grandchildren spoke to him, he would direct the conversation to Torah or Chassidus, with enthusiasm and joy. Even in his final years, when it was hard for him to walk, he would learn with, ybl”c,

Reb Avraham Mordechai Hirschberg every day, and then with his grandson, Reb Nechemia Rozmarin. He learned with tremendous joy, and his grandchildren often remarked that if no one stopped him from learning he could have continued endlessly…

As for avodah, he fulfilled the dictum of “what is service of the heart? Tefillah.” He davened with great fervency, and his eyes were always focused on the open siddur in front of him as he pointed to the words as he recited them. He said he heard as a child in the name of the Belzer Rebbe, zy”a, that during davening, a person should look into the siddur and not out of it. He was always among the first ten people in shul. The family does not remember him ever being late to davening, even by a minute. When the time to daven came, he was already standing in place.

This was all the case when he was in good health. It is hard to write about the mesirus nefesh he displayed in his final years, when he no longer had the use of his legs and could not walk. He would be taken to a beis medrash near his home. Sometimes, he would ascend a few stairs, which took him a long time, and involved a tremendous effort on his part, but it was clear that he was overjoyed to be doing the mitzvah of davening with a tzibbur and wasn’t concerned about his own pain.

When it came to gemilus chassadim, he fulfilled the words of the Tanna, “Kol sheruach habrios nochah heimenu, ruach haMakom nochah heimenu.” He was a role model for all who knew him on how to greet others warmly. He always had a good word, a smile, and was generous with his time and money. He would seek to highlight the positive in other people and not the negative, and when he heard something bad about another person, he would wave it away and say that it certainly not the way it was being told. One never heard him putting down or speaking badly of another person. Even though he was a melamed, he never raised his voice, he wasn’t strict, didn’t shame others, but rather gave rebuke gently and kindly, and with great wisdom, until it was accepted by the other person.

He was a paragon of hachnassas orchim and he bought the needy and downtrodden to eat in his home. He was extremely generous to his guests and kept serving them more and more, until they were satiated.

He was very close to the Rebbes of Ger, especially the Lev Simchah, where he was virtually a ben bayis. Reb Naftali related that when he came to Yeshivah Sfas Emes, the Lev Simchah arranged a nice apartment for him and his brother. The Rebbe also took them to the Belzer Rebbe to observe his avodas hakodesh.

Some three weeks ago, he felt very unwell, and could no longer eat. Last week, after Shavuous, the doctors diagnosed him with a serious illness and said that his days were numbered. Still, he maintained his daily schedule, and this past Shabbos, still attended tefillos in Gerrer beis medrash, as usual.

He learned each day with his chavrusos, despite his great weakness. Indeed, right after each learning session, he fell asleep. He grew steadily weaker each day.

Even on his final day, he was busy giving attention to his grandchildren who came to visit him. Although he could not speak, he made it clear that he was pleased that they had come and made them feel good. He made the herculean effort to speak to his children in America, even though he had no voice.

On Wednesday morning, he davened Shacharis, and then, after drinking a cup of water, his eyes closed and he lost consciousness. Just an hour later, he passed away in Shaare Zedek Hospital in Yerushalayim.

The levayah departed on Wednesday afternoon from Shamgar. The first hesped was delivered by his brother, Reb Itche, who noted his exceptional ahavas Yisrael and ayin tovah. He also pointed out his modesty, how he would flee from all honor. A hesped was then delivered by his son, Reb Baruch Shraga, who mentioned the kibbud av that the entire family had for Re Naftali his whole life, and said, “We learned how to perform the mitzvah of kibbud av from you, as we saw your devotion to your father, Reb Avraham Leib.” He then asked his father to go on High and daven for the family to continue in his ways, and for Hashem to give their mother strength and good health.

The levayah continued past his home on Malchei Yisrael, where a large crowd waited, headed by the Gerrer Rebbe, shlita, who then accompanied the mitah until the beis medrash on Ralbach Street.

From there, the levayah went to Har Hazeisim, where Reb Naftali was buried near his father.

He is survived by his wife, Esther, shetichyeh; his brother, Reb Itche Rozmarin; his daughters, Mrs. Mindy Markowitz and Mrs. Devorah Werdgyger; and his sons, Reb Baruch Shraga of Brooklyn, Reb Yoel Yitzchak of Yerushalayim, Reb Shlomo Chaim of Lakewood and Reb Raphael Mordechai of Yerushalayim, as well as grandchildren and great grandchildren following in his path of Torah and Chassidus.

This article appeared in print on page 7 of the June 13th, 2014 edition of Hamodia.