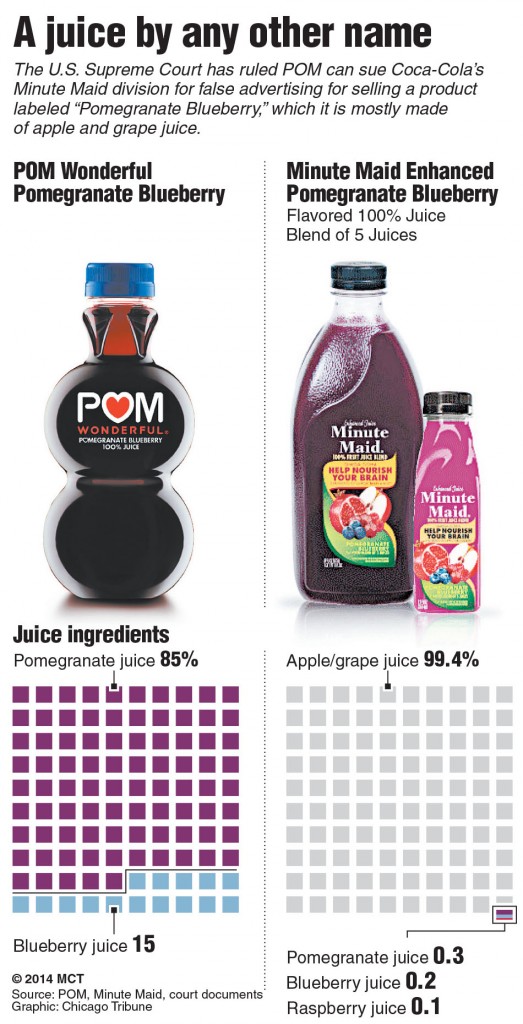 Coca-Cola’s version of pomegranate juice is not quite the real thing, and a competitor has another chance to prove it in court.

The Supreme Court on Thursday sided with juice maker Pom Wonderful in its long-running false advertising dispute with the Coca-Cola Co., a decision that could open the door to more litigation against food makers for deceptive labeling.

The justices ruled 8-0 that Pom can go forward with a lawsuit alleging that the label on a “Pomegranate Blueberry” beverage offered by Coke’s Minute Maid unit is misleading, because 99 percent of the drink is apple and grape juice.

Lower courts had ruled in favor of Coke, because the label conforms to the law, and to Food and Drug Administration rules. But the Supreme Court reversed that decision, finding that the juice label may technically comply with FDA rules, but may still be  misleading to consumers.

Justice Anthony Kennedy, who wrote the court’s opinion, appeared to have telegraphed his position back in April, when he said at oral argument that the label even misled him into thinking the drink was mostly pomegranate juice. His opinion Thursday focused on the juice’s details, noting that the product contained only 0.3 percent pomegranate juice, 0.2 percent blueberry juice and 0.1 percent raspberry juice.

Kennedy said the law governing regulation of food and drug labels does not preclude a competitor from suing under a different law – the Lanham Act – for unfair competition, based on false or misleading claims. He said federal food and trademark laws complement each other in the regulation of misleading labels.

Justice Stephen Breyer took no part in the case.

Pom, which faces deceptive advertising claims of its own, filed its lawsuit against Coke in 2008, after it began losing market share to Minute Maid’s “Pomegranate Blueberry Flavored Blend of 5 Juices” drink. The drink’s label shows the words “Pomegranate Blueberry” in much larger type than the rest of the phrase and includes a prominent picture of a large pomegranate, set among other fruits.

The food and beverage industry had expressed concerns that a ruling for Pom would lead to greater uncertainty about labeling requirements and lead to a flurry of new lawsuits.

Coke’s lawyer claimed during oral arguments that it would be a “logistical nightmare” for food companies to have to change labels in response to every private lawsuit. The beverage giant says the federal government, not competitors, should be enforcing uniform label requirements.

In a statement, Pom’s parent company Roll Global said the decision “will translate into higher assurance for consumers that the labels on beverages and food are accurate.”

Coke released a statement saying it is “committed to clear labeling that fully complies with FDA regulations.” The company said it would defend against Pom’s lawsuit and show “that our product was not the cause of Pom’s poor sales.”

Claudia Vetesi, a San Francisco attorney specializing in false advertising class action lawsuits, said the decision could lead to an increase in “business to business litigation” over food labeling.

“Now a company could make sure its label complies with FDA regulation, but that doesn’t mean they won’t get sued,” said Vetesi, who is not involved in the case. “This chips away at the primacy of the FDA.”

In a separate case, the federal government has filed a deceptive advertising case against Pom, for claiming that its pomegranate juice can treat or prevent heart disease, prostate cancer and other illnesses. The Federal Trade Commission’s action is pending at the U.S. Court of Appeals for the D.C. Circuit.