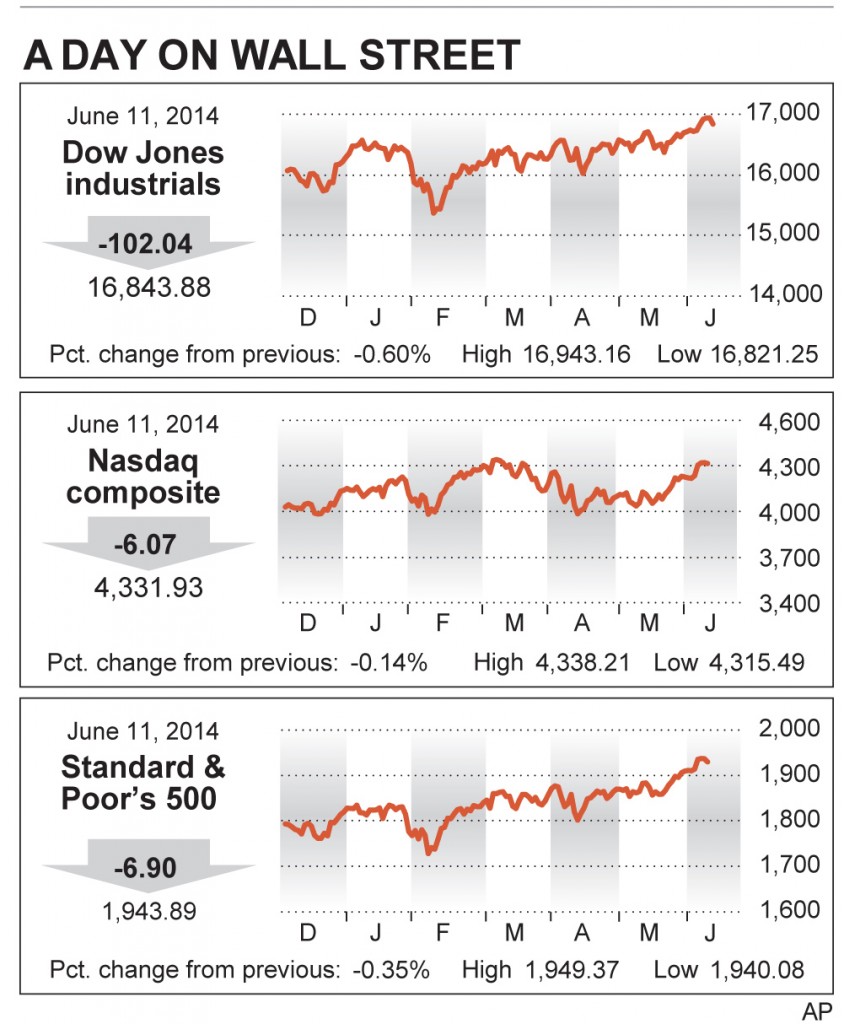 The stock market fell back from record levels Wednesday because of a weaker forecast for global growth and concerns about airline profits.

Delta Air Lines and other carriers fell after Germany’s Lufthansa warned of smaller profits. Boeing slid after analysts said that most of the good news about the plane maker was already priced into the stock.

Stocks opened lower after the World Bank predicted weaker global growth this year, citing a tough winter in America and the political crisis in Ukraine. The bank said late Tuesday that it expects the world economy to grow 2.8 percent this year instead of the 3.2 percent it predicted in January.

The report was a reality check for investors who had pushed major stock indexes to all-time highs this week amid optimism that the U.S. economy was strengthening. Stronger growth should translate into higher revenues and better results for U.S. companies.

Stocks “were going up so much in the last few days that they were due for a little breather,” said Brad Sorensen, director of market and sector research at Charles Schwab.

On Wednesday, airline stocks were among the big losers after Lufthansa warned of smaller profits caused by weaker passenger demand. Lufthansa AG cut its forecast for 2014 and 2015 operating income due to the weaker demand and strikes, among other reasons. Delta dropped $1.21, or 3 percent, to $40.71, making it the second-biggest loser among S&P 500 stocks.

Still, Delta’s stock is up 48 percent this year, the most of any U.S. carrier.

Boeing was another big decliner.

The plane maker’s stock fell $3.15, or 2.3 percent, to $134.10 after analysts at RBC said that after three years of record orders and with no new planes in the pipeline, the good news for Boeing is “already out there.”

Despite Wednesday’s setback, the S&P 500 has been on a slow and steady climb since April and is now up 5.2 percent for the year. In recent weeks, encouraging economic reports on hiring have bolstered optimism that growth will accelerate.

The rally in stocks should continue this year as the economy strengthens, said James Liu, global market strategist at JPMorgan Funds. In the last month, stock gains have been led by the technology and consumer discretionary sectors, which should benefit more from stronger growth. This move “is going to be what drives the market further along,” Liu said.

In government bond trading, bonds gained as stocks fell. The yield on the 10-year Treasury note, which moves inversely to its price, dropped to 2.64 percent from 2.65 percent on Tuesday.

— H&R Block jumped $1.42 cents, or 4.6 percent, to $32.15, making it the second-biggest gainer in the S&P 500. Driving the stock higher was news that the company’s earnings beat Wall Street expectations. Fourth-quarter net income at the tax preparation company surged as more people used its services and its prepaid card.

— Synaptics jumped $19.26, or 29 percent, to $85.78 after the maker of touch-screen technology said it would buy smartphone and tablet chipmaker Renesas SP Drivers for $475 million. Because of the deal, Synaptics also raised its fourth-quarter revenue outlook.