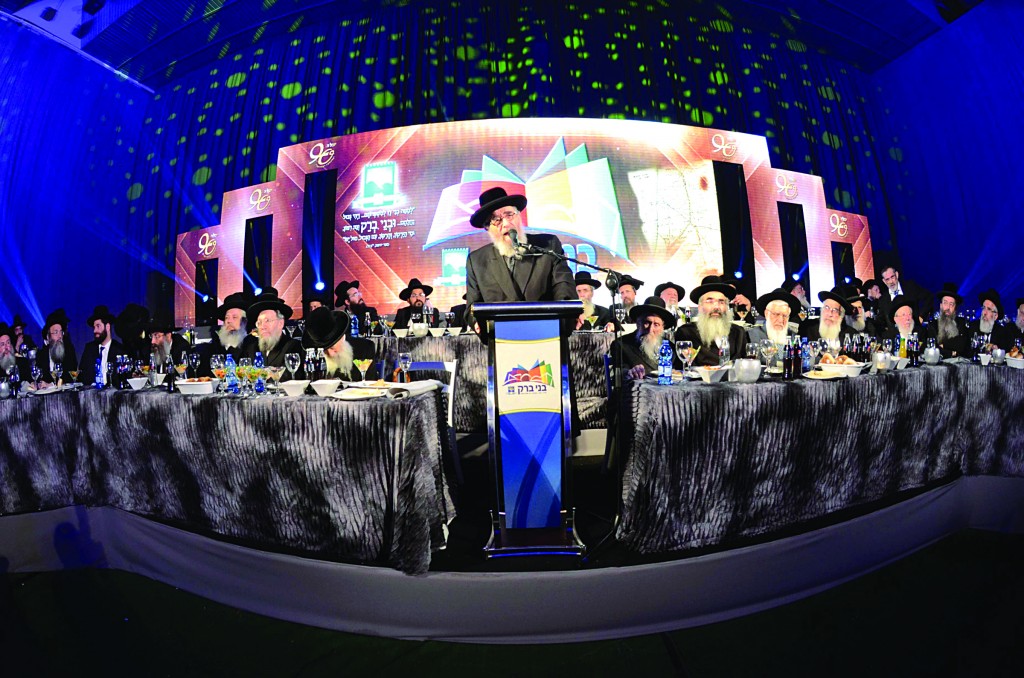 A two-part event held at the Auditorium Hall in Bnei Brak on Monday opened the festivities marking 90 years since the founding of the city. The first part of the event was attended by government ministers, Knesset members, directors general of government ministries, mayors and leaders in Israeli industry alongside directors of Torah educational institutions and leaders of chessed in the Torah world.

Later in the evening, Rabbanim and Roshei Yeshivos noted the great contribution the city — known as the Ir haTorah vehaChassidus — has made to the Jewish world.

Bnei Brak Mayor Rabbi Chanoch Zeibert, who emceed the event, opened the earlier event and spoke in praise of the city’s previous mayors, mentioning its founder Rabbi Yitzchak Gershtenkorn, z”l, who dedicated his life to the founding of a city of Torah and Chassidus, and each succeeding mayor and the development his term in office has brought to the city.

Among the speakers at the event was Interior Minister Gideon Saar, who approved a special budget for development of the city’s parks and gardens in honor of the occasion of its 90th birthday. Later, MK Rabbi Yaakov Litzman; Shas Chairman MK Rabbi Aryeh Deri  and Rabbi Chanania Cholak, chairman of the renowned chessed organization Ezer Mizion, spoke. The latter described the plethora of chessed going on in the city, whose list of non-profit organizations and gemachim is larger than any other city in the world in proportion to its population.

The event included a screening of numerous interviews with senior officials within the government and the economy, each of whom had unique praise for Bnei Brak.

A children’s choir performed   conducted by the noted author Rabbi Chaim Walder, who composed a song especially for the event. Mayor Zeibert gave Rabbi Walder an honorary certificate for his many educational and social activities for the city’s Youth and Family Center.

Closing the first part of the event was Chief Rabbi of Tel Aviv Harav Yisrael Meir Lau, who mesmerized the audience with stories of the unique Torah way of life in the city alongside its bustling commercial activity; a city where every segment of the population can be found, but what all have in common is their dedication to their Father in Heaven. He shared memories of the time when he studied in the Ponevezh Yeshiva in Bnei Brak over 50 years ago.

After a break for Minchah, the second part of the event began with the participation of Gedolei Yisrael, among them Mara d’Asra, Harav Moshe Yehudah Leib Landa, Rav of Bnei Brak, who recalled the mesirus nefesh of his father, Harav Yaakov Landa, for the city. He related how the elder Harav Landa would set out on foot every week to supervise the city’s eruv and tend to what needed fixing. He noted the city’s exceptional hashgachah, and how on numerous occasions it was saved from missile attacks aimed at the central region.

Harav Chaim Wosner, the son of one of the foremost poskim of our generation,Harav Shmuel Wosner, shlita, author of Shevet Halevi, read a letter of blessing from his father. In the letter, Harav Wosner noted that Bnei Brak has merited what no other city has in the world — that the vast majority of its residents are bnei Torah. Ashreihem v’ashrei chelkam for all those who work on behalf of this great endeavor, he wrote.

Harav Shimon Badani, shlita, enthralled the audience describing the city’s special chein and its wealth of children. “The generation of the future is growing up right now in Bnei Brak,” he said.

The city’s 7th mayor, Rabbi Yitzchak Meir, who is still with us, may he live and be well, is one of the few still alive who have personal recollections of the city from its first day. He received an honorary certificate from Rabbi Zeibert for his tireless efforts on behalf of the city during his many years of service.

Harav Yitzchak Zilberstein, shlita, Rav of Bnei Brak’s Ramat Elchanan neighborhood, spoke of the importance of the city in the eyes of the Torah leaders of the generation. He stressed the uniqueness of a city that is run according to Torah and whose residents are scrupulous in their observance of all matters of halachah. He focused on this subject at length, recalling stories he had heard from his father about the early days of the city.

He went on to praise the municipality’s efforts to keep the city clean as fitting for a city of shomrei mitzvos. “Guests from outside the city see the manifold works of chessed going on here and this causes a public kiddush Shem Shamayim.” He went on to say in the name of his father-in-law, Harav Yosef Shalom Elyashiv, zt”l, that one can say of Bnei Brak that one must obey the city’s laws because it is run by mayors who have the din of “shivah tuvei ha’ir.”

Next to speak was Rabbi Ephraim Lerner, a prominent member of the city’s Vizhnitz community, who spoke of the efforts of the Imrei Chaim, zy”a,who built the city’s Kiryas Vizhnitz. Aside from this kiryah’s contribution to the city, it served as a model and beacon of light for other Chassidic kiryos that were later built in cities throughout Eretz Yisrael and abroad.

It was an unforgettable moment when Rabbi Lipa Feishbein, an elderly  resident and a composer of many Modzitzer songs, sang before the audience a special song that he had composed for this day, one that expressed his personal connection to the city.