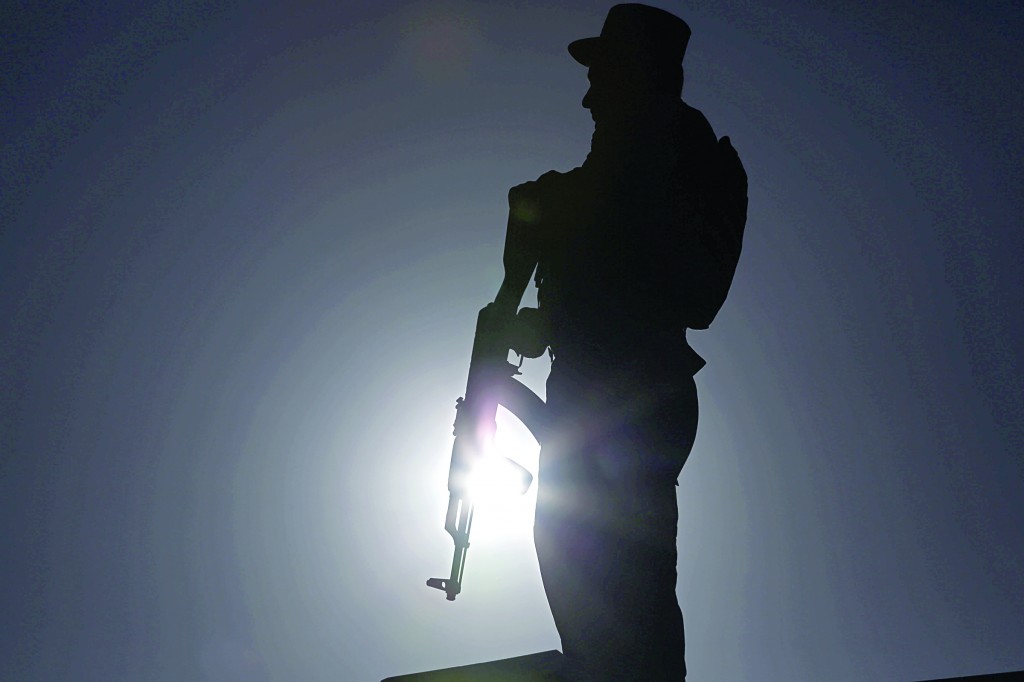 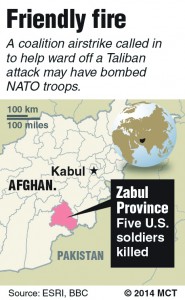 Five American special operations troops were killed by a U.S. airstrike called in to help them after they were ambushed by the Taliban in southern Afghanistan, in one of the deadliest friendly fire incidents in nearly 14 years of war, officials said.

The deaths Tuesday were a fresh reminder that the conflict is nowhere near over for some U.S. troops, who will keep fighting for at least two more years until the end of 2015.

“Investigators are looking into the likelihood that friendly fire was the cause. Our thoughts and prayers are with the families of these fallen,” Kirby said in a statement.

In Washington, two U.S. defense officials said the five Americans were special operations force members, but they were not more specific. The officials spoke on condition of anonymity because notification of the families of the five had not yet been completed.

The deaths occurred during a joint operation of Afghan and NATO forces in the Arghandab district of southern Zabul province ahead of Saturday’s presidential runoff election, said provincial police chief Gen. Ghulam Sakhi Rooghlawanay. After the operation was over, the troops came under attack from the Taliban and called in air support, he said.

There was no way to independently confirm Rooghlawanay’s comments. The coalition would not comment and NATO headquarters in Brussels also declined to comment.

However, special operations forces often come under fire on joint operations and are responsible for calling in air support when needed. Because of constraints placed by President Hamid Karzai, such airstrikes are usually called “in extremis,” when troops fear they are about to be killed.

Airstrikes have long caused tensions between the Afghan government and coalition forces, especially when they cause civilian casualties.

Airstrikes that kill coalition soldiers are far less common. One of the worst such incidents came in April 2002, when four Canadian soldiers were killed by an American F-16 jet fighter that dropped a bomb on a group of troops during night firing exercise in southern Kandahar. In April 2004, former National Football League player Pat Tillman was killed by coalition fire while serving in an Army Ranger unit in one of the most highly publicized cases.

The Taliban claimed responsibility for Monday’s ambush in Zabul. A Taliban spokesman, Qari Yousef Ahmadi, said a battle took place between foreign troops and Taliban fighters in the Arghandab district, and a “huge number” of NATO soldiers were killed or wounded in the fighting. The Taliban often exaggerate their claims.

The insurgents have intensified attacks on Afghan and foreign forces ahead of Saturday’s presidential runoff, and officials are concerned there could be more violence around the time of the vote, although the first round in April passed relatively peacefully.

Of the 30,000 or so U.S. troops left in Afghanistan, special operations forces are among the only ones that are active on the battlefield, mentoring and advising Afghan commandos during raids.

An even smaller group that operates independently of the NATO coalition mandate, which expires at the end of the year, goes after high-value targets including the remnants of al-Qaida. Many of those special forces are likely to remain after the end of 2014.