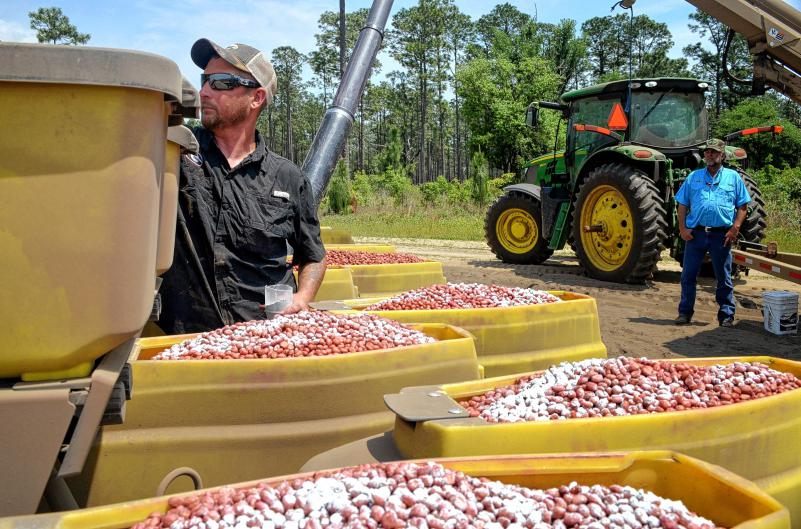 In the heart of the nation’s peanut zone, farmers are putting substantially more runners into the ground than they did last year. And in the eyes of some industry experts, that boom might spell doom.

“Runner peanuts” are used to make peanut butter – not the bigger nuts you’ll find at the market – and they’re the most prevalent of the types of peanuts grown in the United States. Overall peanut acreage is expected to be up substantially this year, around 30 percent more than last year throughout the nation’s 10 peanut-growing states.

“I gave a speech to the Georgia Bankers Association a few weeks ago in which I described the possible problem as the ‘peanut apocalypse,’ ” said Allen Olson, a lawyer who specializes in farm issues in southern Georgia.

His concern is that incentives in the recently enacted farm bill – the massive piece of legislation passed by Congress and signed by President Barack Obama amid much fanfare in February – could lead to over-planting and depressed prices, and ultimately to farmers not receiving the benefits they expected.

Farther south, across the state line in Florida, peanut farmers are fearful, but for a different reason: Because of the way the farm bill is written, certain farmers can participate in price-support programs while others are excluded – and north-central Florida farmers might get left behind.

All the concerns are swirling around a farm bill that, for the most part, treated peanuts well, experts said.

But as the U.S. Department of Agriculture works to put the $956 billion piece of legislation into place, scant information – and in some cases, outright misinformation – might influence the number of acres that farmers plant as they struggle to understand the incentive systems built into the bill.

The “peanut apocalypse” Olson mentioned, if it occurs, would be the result of three new provisions in the bill.

First, acres that were historically used for cotton in previous farm bills were converted to what are known as “generic” base acres in the new bill, which will open the door to more peanuts being planted this year and in later years. Then, the new “price loss coverage” program – known as PLC – set a generous reference price for peanuts, also giving farmers an incentive to plant more acres.

But, Olson said, the farm bill also contains new payment limits per farm. If the federal government determines there are more peanuts than the market can handle, its decision could set up a chain of events that results in farmers hitting payment limits and not receiving the benefits they expected.

“The irony is that the high PLC payments that encouraged farmers to plant more peanuts may not ever get to those farmers,” Olson said. “The use of generic base for peanuts may further exacerbate the problem.”

In Bainbridge, in the far southwestern corner of the state, Greg Calhoun has planted about 2,300 acres of peanuts, putting him back to 2012 levels after a big drop in 2013.

Planters statewide had the same experience: very low numbers in 2013. So much of the jump this year is a return to normal levels.

“It’s hard for us to actually know what to do right now,” he said. “We’re making decisions that could be changed. We just need it to be completed so we can accurately make the right decisions and not oversupply the market.”

The issue in Florida is an extension of that.

The peanut industry there is relatively young, and many of the farms came into existence only after 2002. Given the rules of previous farm bills, they haven’t had the opportunity to establish base acres – meaning a lot of their acreage isn’t allowed to participate in the government’s crop programs.

If all those old cotton acres in Georgia end up switching to peanuts, the resulting heavy production would put those relatively young farms in Florida at a competitive disadvantage.

The growers there have complained to federal agriculture officials and to members of Congress, but so far nobody is sure what can be done to help them.

“D.C. is aware of the problem and they are sympathetic,” said Rick Dantzler, the executive director of the USDA’s Farm Service Agency for Florida. “But whether they have the latitude to make any changes that would create some relief is uncertain.”