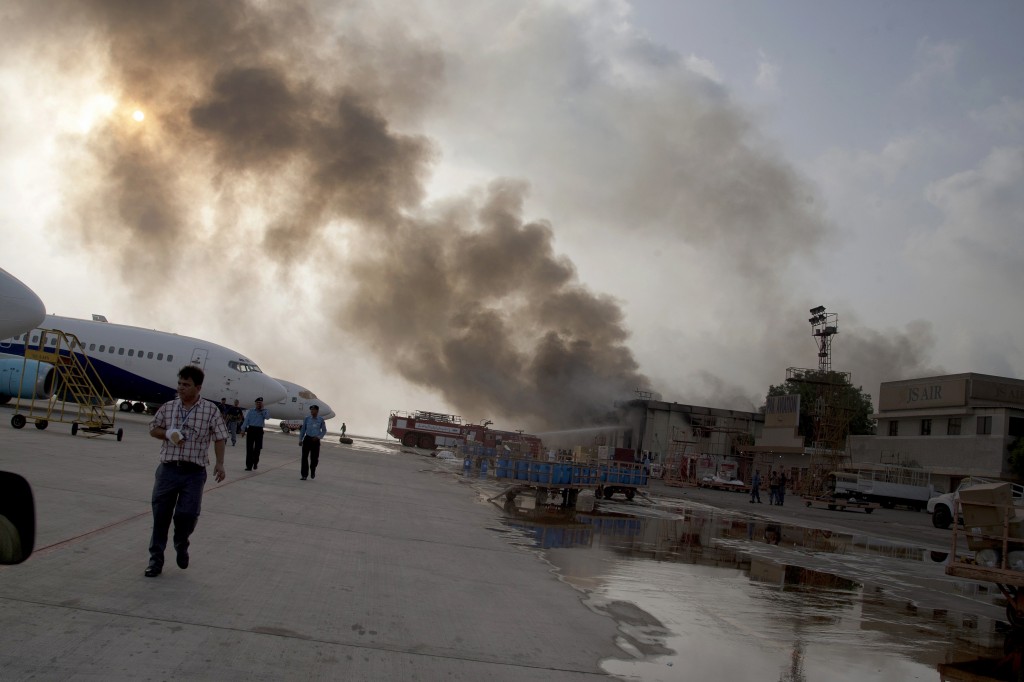 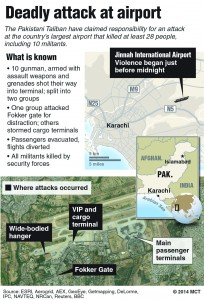 The Pakistani Taliban threatened more violence Monday after a five-hour assault on the nation’s busiest airport killed 29 people — including all 10 attackers — raising a new challenge for a U.S. ally trying to end years of fighting that has claimed thousands of lives.

With recently started peace efforts stalled, the cautious government of Prime Minister Nawaz Sharif may be dragged closer to a decision on whether to take on the terrorists in earnest across a country with a long history of ambiguity when it comes to dealing with militancy.

A further weakening of stability in the nuclear power whose tribal regions are already a hotbed of foment could ripple to neighboring Afghanistan as international combat forces prepare to withdraw from that country.

“Everywhere is a threat,” warned Interior Minister Chaudhry Nisar Ali Khan. “Every area is a target, every building is a potential target.”

Such an attack in Karachi, Pakistan’s business center, will likely discourage foreign investment at a time when its economy is struggling.

The Taliban said the assault on the Jinnah International Airport in Karachi, Pakistan’s largest city, was in revenge for the November killing of the group’s leader in a U.S. drone strike.

In a telephone call, the group’s spokesman, Shahidullah Shahid, warned that “such attacks will continue until there is a permanent cease-fire.”

The attack began late Sunday when 10 gunmen, some disguised as policemen, stormed into a section of the sprawling airport where a terminal for VIP flights and cargo is located. They opened fire with machine guns and rocket launchers, sparking a battle with security forces that lasted until around dawn.

Heavy gunfire and multiple explosions were heard coming from the terminal amid the fighting. A major fire rose from the airport, illuminating the night in an orange glow as the silhouettes of jets could be seen.

At least some of the gunmen wore the uniform of the Airport Security Force. All the attackers wore vests of explosives, some of which were detonated when they were shot at by the police.

The attack started about the same time that airport security personnel and the staff from the Pakistani International Airlines engineering wing were changing shifts, said two of the PIA employees. The employees asked not to be identified because they were not authorized to speak to the media.

A cargo building was left completely gutted by the fire and the explosions, said Rizwan Akhtar, the chief of Pakistan’s elite paramilitary Rangers.