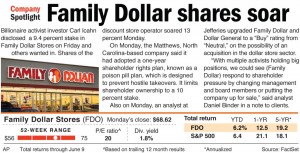 Family Dollar Stores Inc. has adopted a “poison pill” that could repel any potential hostile takeover attempt by activist investor Carl Icahn, who said Friday that he has bought 9.4 percent of the company.

According to securities filings, the board of directors voted to adopt the provision Sunday. Family Dollar’s poison pill will last for one year and could kick in if anyone buys 10 percent or more of the company’s stock, diluting investors’ holdings by triggering new stock issues.

Icahn said he wants to push Matthews, N.C.-based Family Dollar, which has lagged its larger peer Dollar General Corp., for changes to its strategy to improve its performance. Icahn also said he might push for a seat on the board of directors, or for the company to explore “strategic alternatives” – which often means a sale, merger or takeover of the company.

In a statement Monday, Family Dollar said the provision is designed to “help the board protect shareholders against any person or group gaining control of the company by open market accumulation or otherwise without paying a control premium for all shares.”

The discount retailer added that the poison pill is “not designed to prevent an offer to acquire the company, but rather to allow the board adequate time to consider any and all alternatives.”

Family Dollar used a similar tactic in 2011 to fend off Nelson Peltz, an activist investor who made an unsolicited bid to acquire the company. Peltz eventually won a seat on the board of directors for one of his associates, Ed Garden.

Garden was the only member of Family Dollar’s board of directors who voted against the new poison pill, the company said.

This article appeared in print in the June 10th, 2014 edition of Hamodia.