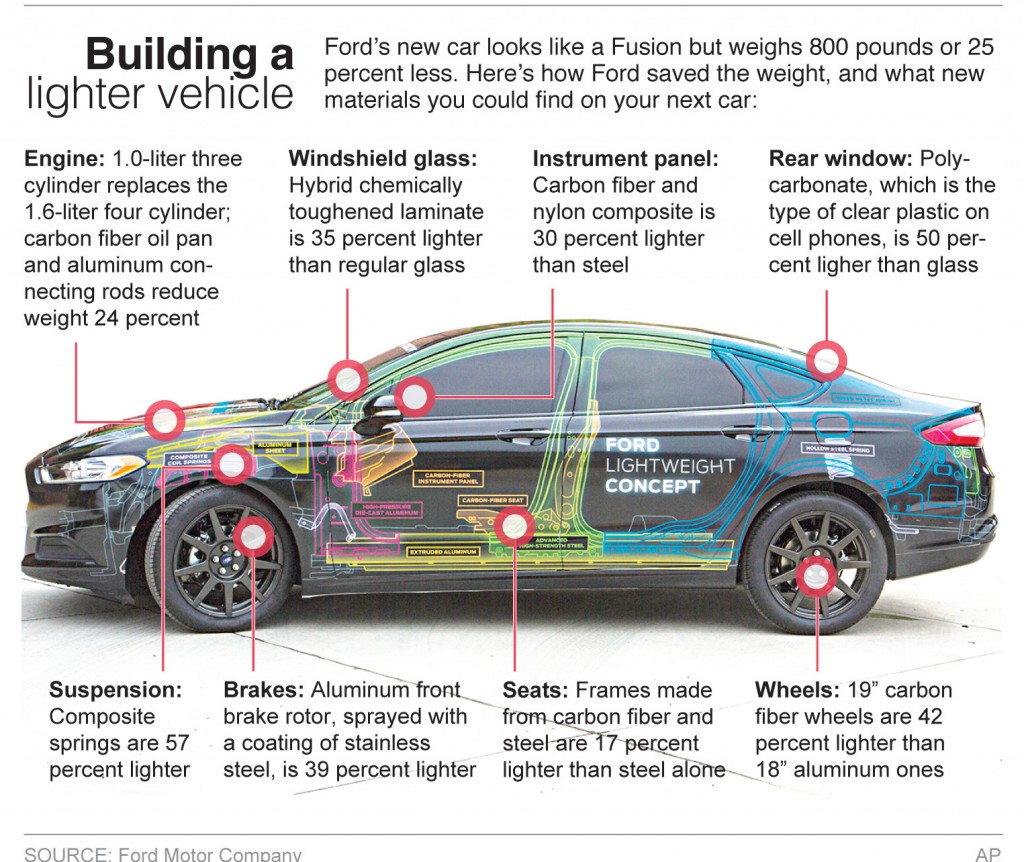 Roofs made of carbon fiber. Plastic windshields. Bumpers fashioned out of aluminum foam.

What sounds like a science experiment could be your next car.

While hybrids and electrics may grab the headlines, the real frontier in fuel economy is the switch to lighter materials.

Automakers have been experimenting for decades with lightweighting, as the practice is known, but the effort is gaining urgency with the adoption of tougher gas-mileage standards. To meet the government’s goal of nearly doubling average fuel economy to 45 mpg by 2025, cars need to lose some serious pounds.

Lighter doesn’t mean less safe. Cars with new materials are already acing government crash tests. Around 30 percent of new vehicles already have hoods made of aluminum, which can absorb the same amount of impact as steel. Some car companies are teaming up with airplane makers, which have years of crash-simulation data for lightweight materials.

Ford gave a glimpse of the future last week with a lightweight Fusion car. The prototype, developed with the U.S. Department of Energy, is about 800 pounds lighter than a typical Fusion thanks to dozens of changes in parts and materials.

The instrument panel consists of a carbon fiber and nylon composite instead of steel. The rear window is made from the same tough but thin plastic that covers your cellphone.

The car has aluminum brake rotors that are 39 percent lighter than cast iron ones and carbon fiber wheels that weigh 42 percent less than aluminum ones.

Because it’s lighter, the prototype can use the same small engine as Ford’s subcompact Fiesta, which gets an estimated 45 mpg on the highway.

The car won’t be in dealerships anytime soon. For one thing, it’s prohibitively expensive. Its seats, for example, cost up to $73 apiece because they have carbon fiber frames. The same seats with steel frames are $12.

Still, prototypes are helping Ford and other companies figure out the ideal mix of materials.

“These are the technologies that will creep into vehicles in the next three to five years,” said Matt Zaluzec, Ford’s technical leader for materials and manufacturing research.

Some vehicles have already made a lightweight leap. Land Rover’s 2013 Range Rover, which went on sale last year, dropped around 700 pounds with its all-aluminum body, while the new Acura MDX shed 275 pounds thanks to increased use of high-strength steel, aluminum and magnesium.

Ford has unveiled an aluminum-body 2015 F-150 pickup, which shaves up to 700 pounds off the current version. The truck goes on sale later this year.

The average vehicle has gained more than 800 pounds over the last 12 years and now tops out at just over 3,900 pounds, according to government data. Not only have cars gotten bigger, but safety features like air bags and more crash-resistant frames have also added weight. General Motors’ Chevrolet Volt electric car has to drag around a 400-pound battery.

Morgan Stanley estimates that shaving 110 pounds off each of the 1 billion cars on the world’s roads could save $40 billion in fuel each year.

“Lightweighting is going to be with us for a long time,” said Hesham Ezzat, a technical fellow at GM. “Every manufacturer is going to have to leverage their entire palette of materials.”

Here’s a look at some of the materials automakers will use to shed the pounds:

HIGH-STRENGTH STEEL: Steel isn’t going away. Chances are, high-strength steel — a lighter and stronger steel mixed with other elements such as nickel and titanium — already makes up at least 15 percent of your car’s weight. Some newer models, such as the Cadillac ATS, are nearly 40 percent high-strength steel.

High-strength steel costs about 15 percent more than regular steel, but less than other materials such as aluminum. It still weighs more than aluminum, but continuing advances could cut that weight. Extremely thin but strong steels made with nanotechnology — which manipulates the metal at the molecular level — could be on cars by 2017.

ALUMINUM: The typical vehicle already contains around 340 pounds of aluminum, or about 10 percent of the weight of a midsize car. It’s most commonly used in engines, wheels, hoods and trunk lids.

Aluminum is lighter than steel and easy to form into a variety of parts. It’s also more corrosion-resistant than steel.

There are drawbacks. The supply of steel is many times greater than that of aluminum, and will be for many years. Aluminum also costs 30 percent more than conventional steel, and a rapid increase in demand could make aluminum prices volatile.

Still, consultant McKinsey and Co. predicts aluminum’s use in the auto industry will triple by 2030.

CARBON FIBER: Airplanes use it. Boats use it.

Carbon fiber is a high-strength material made from woven fibers. It’s half the weight of steel, it is resistant to dents and corrosion, and it offers the most design flexibility, since it can be shaped in ways that stamped metal can’t.

But the high cost of carbon fiber and the time it takes to form it into parts are huge barriers for the auto industry.

Petroleum-based strands must go through several stages before they’re woven into carbon fiber. After that, it takes five minutes to form the material into a part, compared with one minute for steel or aluminum. On an assembly line producing a car every minute, that’s simply too long. Plus, carbon fiber is five to six times more expensive than steel, according to McKinsey.

Automakers, the government and others are experimenting with cheaper materials for the fibers and faster-curing resins that could shorten the time to form parts. McKinsey believes that could significantly shrink the price gap by 2030.

Until then, expect to see carbon fiber in limited amounts on low-volume or luxury cars. The Chevrolet Corvette Stingray, which starts at $51,000, has a carbon fiber hood and roof, while the $41,350 BMW i3 electric car is built around a carbon fiber frame.