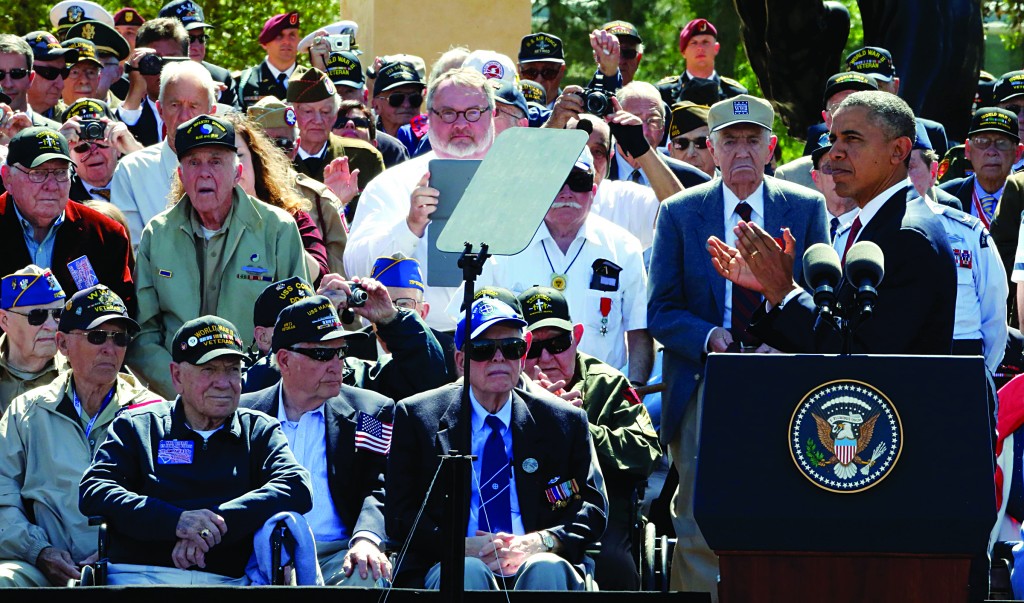 President Barack Obama on Friday declared the hallowed shores of Normandy “democracy’s beachhead” as he remembered the Allied invasions as the beginning of a century of freedom movements that spread across continents.

“Nations that once knew only the blinders of fear began to taste the blessings of freedom,” Obama said.

“That would not have happened without the men who were willing to lay down their lives for people they’d never met, and ideals they couldn’t live without.

”Obama spoke at the Normandy American Cemetery and Memorial, where nearly 9,400 American soldiers are buried on the bluffs overlooking the English Channel. The blanket of white crosses and Stars of David perches over beaches where 70 years ago Allied forces launched invasions that would liberate France from the Nazis, turn the tide of the war and over the course of months leave more than 425,000 men dead, wounded or missing.

“Gentlemen, we are truly humbled by your presence today,” Obama said to the veterans gathered in the midday sun for the anniversary ceremony. The aging vets sitting behind him — some in baggy military dress, canes in hand — rose slowly, if they could, to accept the applause.

Straying from prepared remarks, Obama noted how this ceremony affected him personally. “I don’t think there’s a time I miss my grandfather more, or a time I’d be more happy to have him here than this day. “

The visit and reflections on the battles have become something of a rite of passage for American presidents as D-Day has grown as a public symbol of the contributions of the “Greatest Generation.” President Jimmy Carter became the first to pay tribute to the fallen at Normandy in 1978. Presidents since have seized the chance to offer their retelling of the story.

Obama’s visit was his second; he marked the 65th anniversary in 2009. It comes as a president who found easy acceptance of his military agenda in his first term is on defense on several fronts. Obama is under bipartisan criticism for negotiating with the Taliban for the release of an American soldier. His Veterans Administration is in turmoil as it struggles to provide care for a new generation and has seen veterans die waiting for services. Meanwhile, the president has been under pressure to better explain when he would use U.S. military power, as a civil war in Syria rages on.

On his trip to Europe this week, Obama has struggled to keep his European allies in step on a plan to isolate Russian President Vladimir Putin for his annexation of Crimea. And he’s spent much of his time reassuring allies he would hold to the NATO treaty promising U.S. defense.