NJ GOP Senate Candidate Was There Before 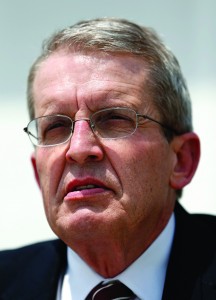 A day after winning New Jersey’s Republican primary for a U.S. Senate seat, Jeff Bell faces the daunting task of running against a former Rhodes scholar with a national following and powerful fundraising skills.

It’s a spot where Bell has been before — 36 years ago.

This time, Bell, 70, is running against Democrat Cory Booker, the former mayor of Newark who won the Senate seat in a special election last year. In 1978, Bell narrowly upset four-term incumbent Clifford Case in the Republican primary before losing the general election to Bill Bradley, a former basketball player who would later run for president.

New Jersey has not elected a Republican U.S. senator since Case’s last victory in 1972. But Bell believes the state is ripe for a change and that his policy priorities of returning the nation to a dollar backed by gold and ending the Federal Reserve’s zero-interest rate is the message.

He said that once people grasp it, they often agree with him that monetary decisions are to blame for the state of the economy.

This article appeared in print on page 4 of the June 9th, 2014 edition of Hamodia.